From SikhiWiki
(Redirected from Khalsa College, Amritsar)
Jump to navigationJump to search 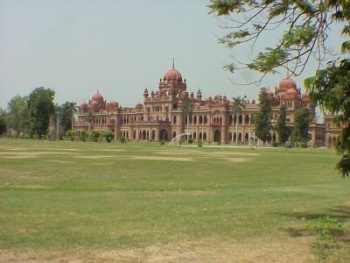 Khalsa College is a historic educational institution in the northern Indian city of Amritsar in Punjab state. Founded in 1892, the sprawling 300-acre campus is located about eight km outside of the city center on the Amritsar-Lahore highway (part of the Grand Trunk Road), adjoining Guru Nanak Dev University campus, with which Khalsa College is academically affiliated. The college's foundation stone was laid in 1892, it has since become one of the eminent Sikh educational institutions.

It was at this location that Guru Hargobind won his first battle in 1634. The Guru was about to celebrate the marriage of his only daughter Bibi Viro when a Mughal force of 7,000 troops mounted a surprise attack on Amritsar. A force of 700 Sikhs defeated the much larger Mughal army.

After a prolonged discussion about the site of Khalsa College, it was decided that one college would be established in Amritsar, followed by a second in Lahore. The 300-acre campus was sited just outside the village of Kot Sayyad Mehmood, which was later renamed Kot Khalsa. With the persistent efforts of the Khalsa College Establishment Committee (KCEC), about 101 acre of land was purchased for Rs 10,000 in the village.

As an important milestone in 1930, a Sikh History Research Department (SHRD) was set up at the college in memory of Sardar Karam Singh Historian after his death who had been instrumental in his life time to bring such department.The department has rare coins and weapons of the 17th and the 18th centuries (mathlock, dhaal, Katar, chakkar, bows and kirpans).

The Building's Architectural and Faculty composition 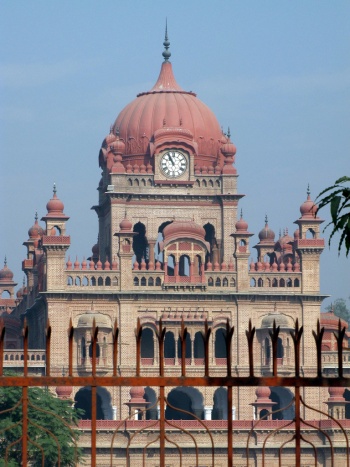 The main building is considered a gem of the Indo-Sarcenic style, which is strongly influenced by traditional Indian and Mughal schools of architecture. The foundation stone was laid on March 5, 1892, with the first classes starting in 1893.

The college was designed by Bhai Ram Singh, principal of the Mayo School of Arts, Lahore, with the help of engineer Dharam Singh Gharjakhia. Bhai Ram Singh was decorated for his services with the Member of the Victorian Order (Royal Victorian Order), the highest civilian award of British India.

This is a composite institution with four wings consisting of faculties of Humanities and Social Sciences, Commerce and Business Administration, Sciences, the College of Agriculture and the Institute of Computer Sciences. Besides, the campus houses the Khalsa College for Women, Khalsa College Girls’ High School, Khalsa College Boys’ Senior Secondary School and Khalsa College Public School.

The college has 86 classrooms, 10 tutorial rooms, 28 laboratories, a double-storey central library, a spacious conference hall and a seminar room equipped with audio-visual facilities. The campus also houses a gurdwara, a gymnasium, a health centre and a dispensary, a dairy farm, a 220-acre students’ farm, besides a Botanical Garden, a swimming pool, a nursery, a fruit farm, a cricket stadium and well-maintained playgrounds and a well-equipped library.

Professor Kishen Singh was the first Sikh Principal of Khalsa College Amritsar, the pioneer Sikh institution in India. He was the eldest son of Bhai Kharak Singh who had migrated from Kabul, Afghanistan.

The most startling event during his tenure as Principal was the visit of Lord Curzon, the then Viceroy and Governor General of India. 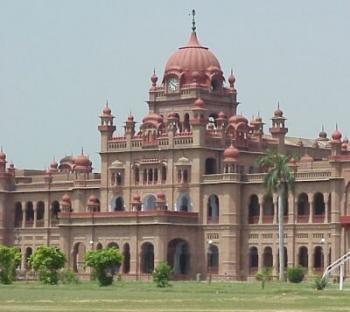 Other principals of Khalsa College Amritsar include:

Khalsa College has the following faculties:

The college has produced many prominent educationists, players, bureaucrats and defence personnel.

The outside court scenes featuring Shah Rukh Khan's character Veer in the film Veer-Zaara were filmed at the college. Being a favourite place of directors/producers, it has attracted many Punjabi as well as Hindi film-makers who have shot videos here.