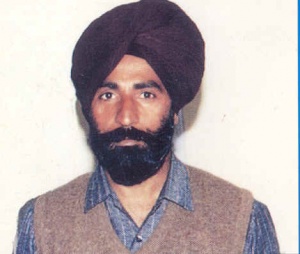 Labh Singh (or "General Labh Singh") was a former Punjab Police officer[1] who took command of the Khalistan Commando Force after its founder, General Manbir Singh Chaheru, died in late 1980s [2][3]. He was an associate of Sant Jarnail Singh Bhindranwale and he had fought against Indian army during Operation Bluestar[4]. He was credited for re-structuring Khalistan Commando Force with a fluid hierarchy. He was involved in a retaliated attack on the Director-General of the Punjab Police Julio Francis Ribeiro and helped them to finance campaign for a separate Sikh state of Khalistan[5][6].

Labh Singh's original name was Sukhdev Singh and he was also known as Sukha Sipahi[7][8]. He was born in 1952 to Mr. Puran Singh and Mrs. Kulwant Kaur in the village of Panjwar, District Amritsar, Punjab, India.

He had his education at Baba Buddha Sahib college.[15] His marriage took place in 1980, his wife’s name was Davinder Kaur.[16] and had two sons Rajashwar Singh and Pardeep Singh.

Twelve years in the police

After finishing his education at Baba Buddha Sahib College.[17], Labh Singh joined the police force in 1971 and continued to serve the force untill he left his job 12 years later[18] in 1983. Even during his service years, he was into the Sikh faith. The story goes that one time, when his relatives had come to meet him at Bhikhiwind Thana, he beat up an alleged Sikh-hating Hindu police officer called Nanda.[19]

In 1983, after he met Jarnail Singh Bhindranwale, he left the Punjab police and joined the Sikh militant movement[20]. In May 1984, he, along with Gursewak Singh Babla[21], Gurinder Singh and Swaranjit Singh, was accused of killing Hind Samachar newspaper group editor Ramesh Chander[22] who was an outspoken critic of Sant Jarnail Singh Bhindranwale and who wrote that Punjab state has become a slaughterhouse[23]. As per a phone call received at Indian news agency afterwards, “it was notified that whoever speaks or writes against Sant Jarnail Singh Bhindranwale will be answered with bullets”[24]. During Operation Blue Star, he fought against Indian Army along with other Sikh militants[25]. Arrested by the army after the operation[26], he was sent to Jodhpur Jail where he spent two years without trial.

He escaped from police cutody on April 25 1986 when Sikh militant leader Manbir Singh Chaheru and his associates attacked Indian security forces that were taking him to trail in the District courts of Jalandhar, Punjab, India[27]. He along with Gurinder Singh and Swaranjit Singh, was to appear in court on charges of slaying Ramesh Chander, a leading Hindu newspaper editor. Militants freed all three prisoners. Four police officers were killed inside the District Court complex and two other officers were shot at the courtyard gate as the attackers fled. [28]. 16 other armed court guards cowered in fear. As per police statement, the sentries were too terrified to fire back. Attackers also took away three rifles and a submachine gun of the slain officers[29][30][31][32][33][34][35].

After KCF's first commander-in-chief Manbir Singh Chaheru's arrest and alleged disappearance, Labh Singh took over the leadership of Khalistan Commando Force[36][37] and re-created it with a fluid hierarchy, enabling it to accommodate any potential setbacks. He was the undisputed head of this force until his death. He appointed half a dozen Lieutenant Generals, each independent of each other, with each of them having Area Commanders. As such, the death of a Lieutenant General, for example, would result in the promotion of an Area Commander[38]. After his death this organisation was headed by Kanwarjit Singh Sultanwind. After Kanwarjit Singh Sultanwind's death, Paramjeet Singh Panjwar became the General of his organisation.

He was involved in several police encounters including daylight attack on the Director-General of the Punjab Police Julio Francis Ribeiro on October 3, 1986 inside the headquarters of Punjab Armed Police in the city of Jalandhar, Punjab, India[40][41][42].

In the morning of Oct 3 1986, Sikh militants in police uniforms drove into the headquarters of Punjab Armed Police in the city of Jalandhar, and attacked director general of Punjab police Mr Riberio with automatic weapons. Mr. Riberio survived but his wife received a bullet injury and his bodyguard died in the attack[43]. Mr Riberio only received a minor injury in his forearm because of a bullet graze.[44] Four other police and paramilitary officers also received wounds.[45][46]. Even though dozens of police officers were present inside the headquarters but all six attackers escaped in a waiting truck.[47] Khalistan Commando Force later took responsibility of this attack[48].

Later 13 people including Wassan Singh Zaffarwal, Punjab Armed Police constable Dalwinder Singh and Baba Gurbachan Singh were charged in this case. Eight of them were later arrested and 5 were declared proclaimed offenders.[49] Police constable Balwinder Singh was first arrested in this case, then he was dismissed from service and later in march 1993, police murdered him in a staged police encounter. His dead body was not handed over to his family and police cremated it by itself. Police also kept his family in illegal detention for 11 months untill he was killed[50] Another Punjab Armed Police Constable Sardool Singh spent 3 years in jail untill court released him on bail. In December 1992, police re-arrested him and his wife. His wife was forced to stay for one night at Senior Superintendent of Police Ajit Singh Sandhu's house in addition to her 18 days of police confinement in different police stations. Police tortured and finally murdered Sardool Singh in a staged encounter on December 26th 1992 and his body was also not handed over to his family for cremation.[51] Several years later in 2004, when Khalistan movement diminished, Wassan Singh Zaffarwal was acquitted in the absence of conspiracy proofs.[52][53].

He masterminded what was at that time the largest bank robbery in Indian history netting almost 6 crore (58 million rupees-US$4.5 million) from Millar Ganj branch branch of Punjab National Bank, Ludhiana[54] a part of this stolen money belonged to the Reserve Bank of India, India's central bank.[55][56] Per Chicago Sun Times, "12 to 15 Sikh militants dressed as policemen and armed with submachine guns and rifles escaped with nearly $4.5 million in the biggest bank robbery in Indian history. Indian Police officials described it as 'a neat and clean operation' where no one was injured".[57] It was documented as “Biggest Bank Robbery” under “Curiosities and wonders” in Limca Book of Records.[58] Khalistan Commando Force members who participated in the robbery were Harjinder Singh Jinda, Mathra Singh,[59] Paramjit Singh Panjwar,[60] Satnam Singh Bawa,[61] Gurnam Singh Bundala[62] Sukhdev Singh Sukha, Daljit Singh Bittu,[63][64][65] Gursharan Singh Gamma[64][66][67] and Pritpal Singh.[68] It enabled the Khalistan Commando Force to buy sophisticated weapons[69] and AK-47 rifles.[70] Sikh militants often used bank robberies to finance their campaign against the Indian government.[5]

He was killed in an exchange of fire with the police near Tanda, Hoshiarpur, Punjab, India (Faultlines, May 1999, vol. 1.1, p. 29, New Delhi: Institute of Conflict Management.)[71][72][73]. At the time of his death, he himself was wanted in connection with the murder of a dozen policemen, a newspaper editor Ramesh Chander, an attempt on the life of former Punjab Police Chief Julio Francis Ribeiro and a major Bank robbery of Ludhiana. Amritsar police Superintendent Suresh Arora declared that with his killing, police has broken the back of the KCF[74]. His entire family was forced to migrate to Canada after his death though his father-in-law stayed on in Labh Singh's house. However, he committed suicide by jumping himself before a train after he was ‘mercilessly’ beaten up by the Punjab Police[75]. The ancestral house of Sukha Sipahi, which remained abandoned for years after his killing, is occupied by his relatives now[76].

Labh Singh's bhog (a Sikh religious ceremoney) to remmeber him was secretely conductucted in Punjab in the year 2006.[77]