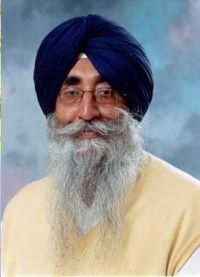 Simranjit Singh Mann (Punjabi: ਸਿਮਰਨਜੀਤ ਸਿੰਘ ਮਾਨ) (May 20, 1945) was born in Simla, India. He was educated at the Bishop Cotton School, Simla and the Government College Chandigarh, where he was a Gold Medalist in the subject of History.

Mann has said, “Call it whatever you want, ‘Khalistan’ or something else, but we are seeking an area that will meet regional aspirations and every life will be safe and free to practise tenets of Sikhism or any other religion. The area we envisage will be very secular and will elect its leaders from among Sikhs, Muslims, (Hindus) or even Christians. Our objective is to fight repression by the Hindu State”.

He has fought tirelessly for social justice for ethnic and religious minorities. In this pursuit Mr. Mann has been arrested or detained some 30 times but he has never been convicted of any crime. Mr. Mann was detained in 1984 after resigning his post as Commandant of the Central Industrial Security Force (I.P.S.) in Mumbai; this action was in protest to India's deadly attack on the Harmandir Sahib (Golden Temple); the most sacred shrine of the Sikhs. He was charged, among other things, with conspiracy to assassinate India's Prime Minister Indira Gandhi. Alhough he was severely tortured and kept in solitary confinement, he was unconditionally released with all charges dropped after spending five years in prison. His release stated that he was set free, "in the interests of the State".

In November 1989, after being elected in absentia to India's Parliament by an overwhelming mandate in the State of Punjab, Mr. Mann was denied his legal and constitutional right to enter parliament. Like Nelson Mandelas Mr. Mann is one of India's prisoners of conscience.

The remaining Sikh dissenting leadership has either been murdered, defamed, jailed and tortured or are now living in exile around the world. They would risk death if they were ever to return to India. Today there are still thousands of Sikhs held in India's prisons with no charges, no bail and no legal representation.

In May 1993, while campaigning in support of a candidate during the Jalandhar by-elections, an assassination attempt was made on Mr. Mann by a gunman associated with a politician in the opposing Indian National Congress Party. However, no charges were ever brought against the alleged gunman. Mr. Mann has some powerful political enemies, some of whom Amnesty International has said are guilty of many serious Human Rights violations, such as murder, torture and rape.

Since 1990 Mr. Mann has as been a virtual prisoner in his on homeland. He has been denied a passport on the grounds, that his going abroad would be a threat to the security and integrity of India. However on November 3, 1999, long after Mr. Mann was elected to the Indian Parliament, the Punjab and Haryana High Court, ordered the Union of India and the Passport Office in Chandigarh, to issue a passport to Mr. Mann.

In protest against the attack on the Harmandar Sahib by the Indian Army - code named Operation Bluestar he resigned from the Indian Police Service on June 18, 1984.

Simranjit Singh Mann comes from a political family. His father Joginder Singh Mann was a speaker of the Punjab Vidhan Sabha (The Punjab Legislative Assembly) in 1967. His wife Geetinder Kaur Mann is the sister of Maharani Preneet Kaur the wife of the ex-chief minister of Punjab Maharaja Amarinder Singh.