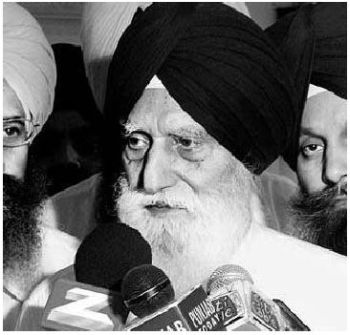 Gurcharan Singh Tohra (24 September 1924 - 1 April 2004), president of SGPC (Shiromani Gurdwara Parbandhak Committee), the Sikh body in charge of controlling Gurdwaras (Sikh places of worship), died of a heart attack in New Delhi on 1 April, 2004 at the age of 79. He remained head of SGPC for a record 27 years, and was one of the most influential and controversial Sikh leaders of the 20th century.

Senior Akali Dal and SGPC chief Gurcharan Singh Tohra died in a private hospital in New Delhi, India early on Thursday, 1 April 2004 aged 79. Mr Tohra who was a respected leader for many years of the SGPC died at 12:41 am after he suffered a heart attack at 12:30 am at the Escorts Heart Institute, announced administrator Mathur Verma. Tohra, who was in serious condition after suffering a massive heart attack some days ago, was flown here this evening from Amritsar for advanced treatment.

Tohra had suffered from a massive heart attack on March 25, 2004 and he was put on a life support system after his condition deteriorated on March 28 following a sudden fall in blood pressure and heartbeat. Tohra's health problems were a constant worry because he had suffered a heart attack in the past. Tohra had also undergone a bypass surgery in Delhi. His wife, widow Joginder Kaur was a constant supporter of this leader.

Indian President A.P.J. Abdul Kalam and Prime Minister Atal Bihari Vajpayee have condoled the death of Gurcharan Singh Tohra, head of the Shiromani Gurdwara Prabandhak Committee (SGPC). President Kalam described the Sikh leader as a "prominent political and social leader who was well known for his work during his many years in public life".

Born at Tohra village of Patiala district in Punjab in September 1924, he had an early interest in religion and was an active Akali worker even before the partition of India. He became General Secretary of the Patiala unit of the Akali Dal in 1947.

Tohra, a graduate in Punjabi from Lahore University, worked at the grass root level for the next two decades and came into contact with Communists, including CPI-M leader Harkishan Singh Surjeet though he did not become one himself.

Known as a hardliner, Tohra had carved out for himself the image of a non-conformist with the powers-that-be in Akali politics and had taken frontline SAD leaders Surjit Singh Barnala and Parkash Singh Badal who had headed Akali Dal governments in Punjab in the eighties and nineties.

He joined hands with Badal in June last year after the SAD-BJP alliance was routed from power during the assembly elections in Punjab.

An agriculturalist, Tohra was first jailed in 1945 during the Riyasti Praja Mandal Movement in Nabha, in 1950 for formation of popular government in PEPSU. In 1955 and 1960 Tohra was put behind bars in connection with Punjabi Suba agitations, in 1973 in connection with Kisan agitation in Haryana, in 1975, under MISA and under NSA and TADA and religious matters, including Dharam Yudh Morcha and Operation Blue Star (1984).

Tohra became the acting president of SGPC, which manages key Sikh shrines, in 1972 after the death of Sant Chanan Singh and was formally elected its president for the first time in November that year.

Tohra continued to head the SGPC, considered the mini-parliament of the Sikh community, for a record 27 years before he was unceremoniously removed from the key post following a split in SAD in the wake of his revolt against Badal's leadership.

Tohra was arrested during the Emergency and was very popular in Punjab until Jarnail Singh Bhindranwala emerged on the scene and militancy took over Sikh politics.

Tohra's differences with then chief minister Parkash Singh Badal contributed to the fall of the Akali-Janata coalition in 1980. That began a period of crisis for Tohra as he seemed to succumb to Bhindranwala's cult and did not oppose his hardline views.

After Operation Blue Star in 1984, Tohra became an embittered man and did not endorse the Punjab accord put forward by the Rajiv Gandhi government to the Akalis for sharing political power with Harchand Singh Longowal.

He took another controversial step some time later by having militants demolish the Akal Takht which was rebuilt after Operation Blue Star by pro-government religious leaders. The Takht was rebuilt by the militants over several years.

This turned him into the 'bete noire' not only of the Centre but also of the then Akali government in Punjab headed by Surjit Singh Barnala which had opposed the move.

He was detained under the National Security Act but continued to be elected SGPC chairman for several years in absentia.

Throughout this bleak period, Tohra was supported by Badal but in 1999, the two leaders, considered the best of friends, fell out after the SGPC chief pressed for Badal's removal as SAD chief.

The origin of Tohra-Badal feud could be traced to the former's demand made in November 1998 for one-man-one-post for Akali Dal leaders, a remark seen by political observers as his pot shot at Badal who was at that time both the chief minister and SAD president.

Badal had Tohra removed as SGPC chief on March 16, 1999, a few days before the commencement of tercentenary celebrations of the birth of the Khalsa at Anandpur Sahib.

Tohra was then expelled from SAD forcing him to form a new party Sarv Hind Shiromani Akali Dal with five members of Badal's cabinet, including Manjit Singh Calcutta, Mahesh Inder Singh Grewal, Harmail Singh Tohra, Inderjit Singh Zira and Surjit Singh Koli, who all resigned in protest against the expulsion.

Badal consolidated his grip on Akal Takht, the highest temporal seat of Sikhism, by removing Bhai Ranjit Singh as its top Jathedar in February 1999 and installing his hand-picked Giani Puran Singh.

Adversity brought Tohra and Badal together again after SAD was routed in the February 2001 assembly elections in Punjab and Tohra's SSHAD failed to win even a single seat.

Badal was at the receiving end of Amarinder Singh-headed Congress government's anti-corruption campaign as vigilance personnel searched his premises as well as those of his MP son Sukhbir Singh Badal in Punjab and outside.

On June 13 last year, Badal and Tohra finally buried the hatchet after the latter welcomed the former's appearance before the Akal Takht and expressed satisfaction over the mild religious punishment ordered by the Sikh clergy to the former chief minister.

Tohra was appointed as SGPC President in July 2003 after he accepted Badal's pre-eminence in the SAD.

Tohra inherited SGPC administration that was under the influence of Master Tara Singh. Under Tohra all sorts of Marxists, Communists, Naxalites and Agnostics were ushered into Gurdwara administration. According to Spokesman bereau report, Tohra auctioned Kar Seva to Sant Babas for monetry gains. It resulted in destruction of ancient Sikh Gurdwara heritage and instead brought in Marble, sign of decayed Mughal Era. Tohra's acceptance of Rajya Sabha seat in Parliament of India from Badal, during his last days, showed where his real interest lay.

During his tenure as President of SGPC, no serious efforts were made to administer Amrit Sanskar to people and all sorts of corruption set in at Gurdwaras. He played into the hands of Anti-Sikh forces.