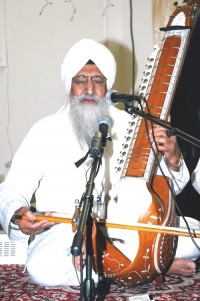 Bhai Avtar Singh (1925-2006) was always an ardent exponent of Gurmat Sangeet who practised the traditional style of Kirtan in keeping with the historic melodies of Guru's Ragis. It was with great sadness that the Sikh community acknowledged the loss of their most dedicated Gurbani Kirtania who passed away peacefully at about 10.50 PM (IST), November 24th, 2006. Bhai Avtar Singh who was 81 years old, passed away at his residence, with his whole family present.

Llineage back to our Gurus.

Bhai Sahib's family has a direct historical connection linking them back to Ragis from the times of our Gurus. Bhai Sahib was born in 1925 to a Gursikh family; his father, Bhai Sahib Jwala Singh Ji was an accomplished Ragi, who imparted his knowledge of Gurmat Sangeet to Bhai Sahib Avtar Singh Ji and his older brother Bhai Sahib Gurcharan Singh Ji, who together were the eleventh generation exponents of Gurbani Kirtan. It is from this past period during the creation of Sikhism that Bhai Sahib's family has been involved in Gurmat Sangeet. Bhai Sahib had devoted over sixty years of sharing and preserving the distinguished grace, aesthetics and spiritual heritage of this 400 year old Indian classical music tradition. Used in practising the ragas found in Gurbani and the talas of classical times.

Bhai Sahib Avtar Singh Ji and Bhai Sahib Gurcharan Singh Ji have rendered invaluable service to the Sikh Panth by preserving Gurmat Sangeet in its pristine form. They accomplished this by their unwavering commitment to the tradition over the years even when Gurmat Sangeet was being subverted by the pressures of popular culture and film music. The crowning achievement of their career was the publication of "Gurbani Sangeet Prachin Reet Ratnavali" in which they documented hundreds of traditional Gurmat Sangeet compositions handed down from generation to generation in an unbroken oral tradition. 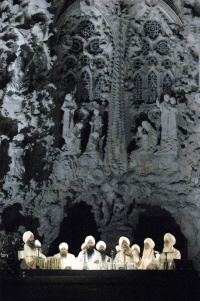 Recently, the Kirtan Jatha has been renewed upon its being joined by Bhai Kultar Singh, Bhai Avtar Singh Ji's son, who gave up his professional career to return to his roots and propagate the family's tradition as exponents of Gurmat Sangeet. He forms the twelfth generation of Ragis starting in the times of the Gurus. The jatha has continued to show its unwavering commitment and dedication to the traditional style of Kirtan and has continued the old traditions of the Gurus' Ragis.

In the summer of 2004, Bhai Sahib Ji with Bhai Swarn Singh and Bhai Kultar Singh played a wonderful role at the Interfaith meeting at Forum 2004 in Barcelona, Spain. They represented the Sikh community for a period of almost 7 days. They represented the Guru's music at its best and many recitals of Gurbani Kirtan were performed in front of a cross-section of the world community and they were the marvellous face of the Guru's music for the world.

Bhai Sahib was always very humble and had a lot of "Nimrata" which was always so moving for the Sangat. To witness such a hugely accomplished Kirtania without even a slight hint of selfishness or ego was very refreshing. A devoted Gursikh he was an inspiration to all the Sangat both at the venue in Spain and back in the UK. He was always ready to teach his art to young students and many hundreds have been inspired by him.

Although he has always followed the traditional Gurbani style, in 2005, after a hiatus of 59 years, Bhai Avtar Singh Ji picked up a Taus again, thus bringing back to the practice of Gurmat Sangeet the use of a stringed instrument. Many recordings, made during his visit to the Boston area in June 2005, feature Bhai Sahib playing Kirtan on Taus. Bhai Sahib had always been an accomplished player of many musical instruments including the Taus. 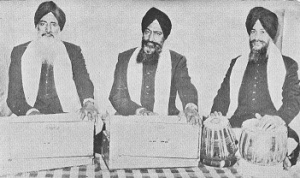 Born on 8th January 1926, in village Saidpur in the former Kapurthala State, Bhai Avtar Singh is the 11th generation singer of an illustrious family of 'Raagis' who have sucessfully preserved and practiced this original unique 'ang' (style) of religious music. He, along with his brother the Bhai Gurcharan Singh and their nephew Bhai Swaran Singh (on tabla) have been performing Kirtan since 1946.

His family's association with the Gurus dates back to the 3rd Guru, Guru Amar Das (1479-1574) who resided in Goindwal. The Kirtan tradition started in their family during the times of Guru Arjan Dev (1563-1606). His repertoire of old compositions (Reets) has the stamp of the style and structure of the singing practiced during the times of the Gurus (1690-1705). He is perhaps the sole exponent of the true style of rendering the 'Partaals' a unique variant of Dhrupad singing, originated by the 4th Guru, Guru Ram Das.

Bhai Avtar Singh started his training at the age of 10 under his illustrious father, Bhai Jawala Singh, who besides aquiring the musical heritage from his father, had the benefit of learning from two famous Ragis of the 19th century: Bhai Sarda Singh and Bhai Rangi Ram. From Bhai Rangi Ram came the music of the Udaasi (Ascetic) tradition which had its roots in the lineage of Swami Haridas, and which was passed down to Bhai Avtar Singh by his father.

Apart from rigorous Swar Saadhana and correct rendition of most intricate 'reets' (old compositions - Kirtees) Bhai Avtar Singh has also mastered the rare bow and string instrument of 'Taus', a melower version of the 'Dilruba'.

His singing is marked by an emotionally intense spiritual yearning (pukar), rooted in deep spiritual longing for the Eternal, Timeless (Akaal Purukh), having an affect of intense 'Virha' - so essential in Shabad Kirtan in Gurmat Sangeet tradition.

Bhai Avtar Singh's music is a frozen heritage of the 15/16th century's music tradition of North India. He belongs to a rare category of 'raagis' of the Sikh tradition who are fully conversant and apt in singing all the 'ragas', 'lores' and variants of the music contained in the Sikh scriptures. 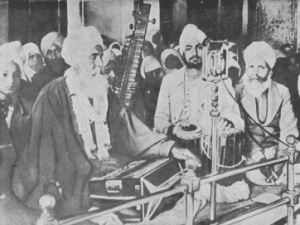 Bhai Jawala Singh Ragi's family lineage travels right back to the time of Guru Arjan Dev Ji. His family then under the instruction of Guru Hargobind Sahib ji learnt and performed kirtan according to the rules of Gurmat Sangeet.

His father Bhai Jawala Singh was born in 1892 at the village of Saidpur in the Kapurthala district of Punjab. Bhai Jawala Singh Ragi's family lineage travels right back to the time of Guru Arjan Dev Ji. His family then under the instruction of Guru Hargobind Sahib ji learnt and performed kirtan according to the rules of Gurmat Sangeet.

Bhai Jawala Singh's father Deva Singh and his grand father were also noted ragis of their era. They both were known to have been competent at the now almost extinct Saranda. Bhai Jawala Singh was particularly fond of the Taoos although in his later years (?) resulted in his playing the Harmonium. He was known to have so many puratan reets in his repertoire that he never needed to repeat a tune, even though he had been playing in the same place for weeks on end.

Bhai Jawala Singh learnt Gurbani Santhiya from the Granthi in Saidpur, Baba Pala Singh. From there he was sent to the Nirmala Dera in the village of Sekhwari in Firozpur where he was taken under the wing of Baba Sarda Singh who taught him music. He also further studied the Guru Granth Sahib throughout his time at the Dera. From here Baba Sarda Singh sent Bhai Jawala Singh to Amritsar to learn from the well respected Baba Vasava Singh (commonly known as Baba Rangi Ram).

Following his apprenticeship, Bhai Jawala Singh returned to Saidpur and gradually became famous for his musical talent. He was very much in demand to sing in large gatherings all over the Punjab.

A a key member of the Singh Sabha movement Bhai Jawala Singh was arrested while trying to recover the keys to the Golden Temple from the British Deputy Commissioner of Amritsar. He was also a member of the first and last jatha in the Jaito morcha. He was also present at the cremation of the martyrs of Nankana Sahib where, seated amongst the pools of blood beside the heaps of corpses, he sang the shabad "ਖੂਨ ਕੇ ਸੋਹਿਲੇ ਗਾਵੀਅਹਿ ਨਾਨਕ ਰਤ੝ ਕਾ ਕ੝ੰਗੂ ਪਾਇ ਵੇ ਲਾਲੋ ॥1॥" (Nanak, the eulogies of a massacare are sung, and the saffron of blood is sprinkled, O Lalo).

Bhai Jawala Singh presided over the first All India Ragis conference in 1942. He passed away on 29 May 1952 at his village in Saidpur.

Contrasted against the ever growing trend of having kirtan being blended with tunes from Bollywood, Bhai Sahib and his family have been intstrumental in the preservation of the pristine form of Gurmat Sangeet. For this the Sikh Panth is ever greatful to the hard work and preserverence that such souls underwent in order to spread the love and teachings that Guru Sahib has brought into this world.