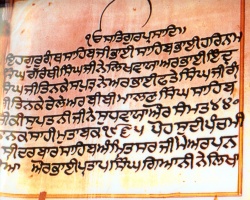 A page from the Guru Granth Sahib

Shabad is the term used by Sikhs to refer to a hymn or paragraph or sections of the Holy Text that appears in their several Holy Books. The main holy scripture of the Sikhs is the Sri Guru Granth Sahib also shortened to SGGS. The first Shabad in the SGGS is the Mool Mantar. The text used for the Shabad is in the holy book is Gurmukhi. Below is the Shabad in English transliteration and translation.

"The Mul Mantra, the Root Mantra, is the only cure for the mind; I have installed faith in God in my mind" - SGGS page 675

Index of the Holy Granth

The Shabads or hymns are also classified into chapters named as musical Raags. There is a non-Raag section at the beginning and end of the Guru Granth Sahib. Although according to the index of Ragas in Ragmala, the total number of Ragas and Raginis is 84, the Guru has used only 31 for the compositions in the Guru Granth. So the Granth is arranged firstly according to the Raga, secondly, according to the nature or metre of the poem, thirdly authorship, and fourthly the clef . The ordinary edition of Adi Granth Sahib contains 1430 pages as under :