From SikhiWiki
(Redirected from Sukhmani sahib)
Jump to navigationJump to search 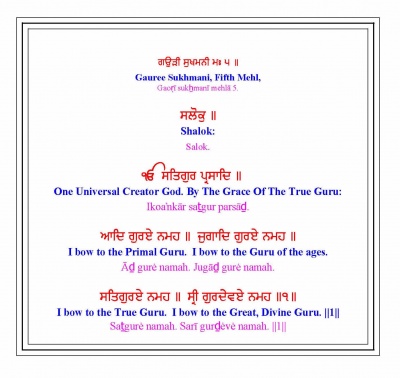 The Salok at the beginning of Sukhmani Sahib

Sukhmani or Sukhmani Sahib is the title given to the Gurbani in raga Gauri Sukhmani[1] in the Guru Granth Sahib which in turn appears in the major musical measure Raga Gauri. It is a lengthy composition, written by Guru Arjan Dev, the fifth Sikh Guru. The sacred prayer is 35 pages long from page 262 to page 296 of the Guru Granth Sahib. Surprisingly, many ardent Sikhs include the recitation of this Bani in their daily regimen of Nitnem. The physical site, where the Guru, around AD 1602-03, composed this composition was once enclosed by a dense wood. The location is still marked on the bank of the Ramsar pool in the city of Amritsar, near the famous Golden Temple, the Harimandir Sahib.

It is said that Baba Sri Chand, elder son of Guru Nanak and founder of the Udasi order, came to Amritsar to meet Guru Arjan, then engaged in composing this Bani. The Guru who had by that time completed sixteen astpadis, or cantos, requested that he continue the composition. Baba Sri Chand, out of humility, only recited the salok of Guru Nanak following the Mool Mantra in the Japji — “aaad sach, jugad sach; hai bhi sach, Nanak hosee bhi sach” — "True in the beginning, True through the ages; True even now; Nanak say, Shall remain ever True" (SGGS p285). This salok was thereupon repeated by Guru Arjan at the head of the seventeenth astpadi.

The word Sukhmani is rendered into English as “consoler of the mind.” The entire poem has been translated into English more than once under some commonly preferred titles, "Jewel of peace", “Psalm of peace” or “Song of peace”, signifying the soothing effect it has on the mind of the reader. Sukh literally means peace or comfort and mani means mind or heart. ( ਮਣੀ Sukh in Gurmukhi can also mean jewel, gem, precious stone. [2]).

The couplet, "Sukẖmanī sukẖ amriṯ parabẖ nĝm. Bẖagaṯ janĝ kai man bisrĝm. Rahĝ­o" translates to, "Sukhmani: Peace & pure ambrosial Nectar are in God's Name. The devotees' mind abide in bliss and calm peace. ||Pause||" constituting rahau, the only one in the composition, which means pause or rest and which is an equivalent of the Hebrew word selah occurring in the Psalms, sums up the most characteristic feature of this bani. According to this couplet, Sukhmani is the bringer of the bliss of the Lord’s name; it dwells in the hearts of those who love Him. 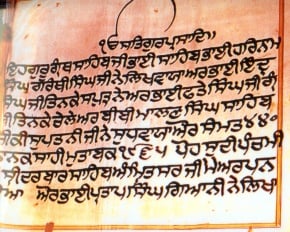 A page from the handwritten bir of Guru Granth Sahib by Pratap Singh Giani, located on the first floor of Sri Harimandir Sahib, Amritsar.

Sukhmani is a theological statement of the major tenets of Sikhism expressed in a devotional poetic form. Recited by the Sikhs as a part of their morning prayer, it is one of the easier texts to learn, in the Guru Granth Sahib. It is similar in syntax and structure, though its essential meaning will elude one not attuned to the spiritual experience and the idiom and phraseology of gurbani. The language character is close to Khari Boli, the Hindi that had evolved in the areas lying northwest of Delhi, with a distinct inclination towards Punjabi. The expression here, however, is poetic in its overtones and shares a common character with the variety of Hindi or Bhakha that was used by religious teachers all over northern India. While this language has evolved out of Braj, it is closer to Punjabi in its grammatical form. This will be substantiated by comparing it with the language of a poet writing in pure Braj, such as Surdas, who flourished around the same period as Guru Arjan. To indicate the differences of the language of Sukhmani from Braj even Bhakha, a few examples may be given:

The language of the Sukhmani can be best described as a synthesis of the Bhakha and Punjabi. In the more philosophical and meditative of their compositions, the holy Gurus are inclined to use a variety of Hindi with Punjabi overtones, while in the more deeply intimate pieces such as the chhants and pauris of Vars, [[]]Punjabi, in its dialectical variations, has been employed. This principle, by no means absolute, is only broadly applicable.

There is a great significance of Sukhmani in the Sikh way of life and also enjoys reverence among the devotees of the Sikh faith. They used to recite it in the early hours of morning. Generally it takes more than half an hour to recite it. Any one who reads it with love, faith and devotion opens the doors of the treasure of eternal bliss and the very spring of peace, the reason being that the author (Sri Guru Arjan Dev ji) has poured into this composition his very spirit which was peace itself. This peace he had got from his constant communication with God. It is a treasure of all kind of happiness and pleasure.