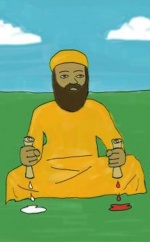 Wealth and Poverty in Sikhism The Sikh Gurus provide the learner/devotee with many examples of how to live life in a upright manner; in a style which is compatible with the "laws of nature" or which please the Lord!

Let us start by looking at the notions of wealth and poverty as perceived within the Sikh tradition. Before we proceed with this inquiry, we need to glance at the etymology of these terms in the Punjabi language.

In the Punjabi language, wealth is called maya. According to a Punjabi-English Dictionary, 'maya' is money; wealth; lakshmi (hindu goddess of wealth); illusion; magical power of a deity; or jaal; a bubble; deceit; mere show. Bhai Kahn Singh, in his Mahan Kosh (Encyclopaedia of Punjabi Literature) says: a "mayadhari" is a person who worships wealth and considers it his own property; a person who dreams, lives and speaks about money all the time!

In Sikhism, the concept of maya/ wealth is understood in two contexts: material wealth and an illusion which is applied to describe the essence of the world as real but also impermanent. It is attachment to material wealth, and greed to accumulate more and more wealth which is strongly condemned by the Sikh Gurus. For example, Guru Amar Das says: ‘mayadhari ut andha bola' ('the worshipper of maya/ wealth is utterly blind and deaf').

Reflecting on the harmful effects of attachment to wealth, Guru Amar Das further states: ‘Maya/ wealth is (a) she-serpent, it clings to the whole world. And so, he who serves her, him she eats [GGS:510].

The episode of Guru Nanak's meeting with a wealthy man called Duni Chand is very popular in Sikh tradition; clearly it demonstrates Guru Nanak's concern about hoarding wealth. It is believed that Guru Nanak once met Duni Chand who was very proud of his wealth and had the desire to become the richest man in Lahore. Guru Nanak gave a needle to Duni Chand and said, ‘Please keep it with you and give it to me in the next world'.

Duni Chand paused for a while and then said, ‘You know well enough that I cannot carry it to the next world - we cannot take anything with us to the next world!'. Guru Nanak looked at Duni Chand and remarked, ‘If you cannot take this smallest of things with you, how can you carry your millions with you?'Guru Nanak advised him to share his wealth with needy people and use it for charitable purposes. Does it then mean that Sikh teachings are against creating wealth? We will attempt to unlock this riddle by looking at the notion of poverty.

Literally, poverty, gareebi, denotes the economic state of a poor person; i.e., gareeb means a poor person. In Sikh teachings, the concept of gareebi/ poverty has been extensively applied to denote humility and the term gareeb has been used for a humble and meek person and this word is proudly used by Guru Nanak for himself. He says: 'main greeb main maskeen ... tera naam hai adhara' ('I am poor and humble, I have only the support of your Naam'). Guru Arjan also applies the term gareeb to himself. He writes, ‘For me the meek one, the only true Support art Thou, O, my true Guru.' [GGS:398].

The Concept of Social Justice in Sikhism

The notion of dharmsal (place for practising righteous deeds) is fundamental to understanding the doctrine of social justice and responsibility. The term 'dharmsal' is composed of two words: dharam which denotes religious, ethical and social obligations; while sal means a place of abode.

Guru Nanak, in his hymn, Japji, describes the earth as a dharmsal established by God in the universe and human life as the highest form in God's kingdom. In Sikh teachings the doctrine of dharmsal sets the agenda for daily conduct. It means that one must earn one's living by honest and hard work and be prepared to share it with others.

Guru Nanak says: "He who works hard honestly for what he eats, and shares it with others has found the true path...." [GGS:1245]

Story of Malik Bhago and Lalo

Interestingly, the notion of honest and hard work is beautifully depicted in the episode of Malik Bhago and Lalo. According to the Sikh tradition, Guru Nanak once stayed with Lalo who was a carpenter and belonged to the shudra / low caste. The landlord of that village was Malik Bhago. He objected to Guru Nanak's choice of residence with the low-caste Lalo.

It is said that Malik Bhago immrediately invited Guru Nanak for a meal, which he refused to accept. Malik Bhago did not approve of the attitude of Guru Nanak and sent for him again. Now, Guru Nanak went to Malik Bhago's mansion and explained the reason for his refusal:

‘Look, Malik Bhago! I am happy to stay at Lalo's house and eat his food which is earned with honest and hard work, while your food contains the blood of your workers who tirelessly work on your fields day and night.'

Moreover, Guru Nanak expressed his delight and enjoyment of the company of an honest and hardworking carpenter by declaring that:

"There are the lowest men among the low-castes, Nanak, I shall go with them. What have I got to do with the great? God's eye of mercy falls on those who take care of the lowly." [GGS:Sri Raag]

Guru Nanak most skilfully applied the doctrine of dharmsal to all domains of life by selecting terminology for justice from both Hindu and Muslim traditions. He strongly laid stress on haq halal (Islamic term for righteousness) in earnings and forbade encroachment on what rightfully belonged to others:

"Encroachment upon what rightfully belonged to others is forbidden to both Muslim and Hindu, as pork to the former and beef to the latter. The guru or pir can help a person only when he is not guilty of this act which is tantamount to the eating of carrion." [GGS: Vaar Majh]

The teachings of the Gurus are equally valid and instructive for applying the principles of dharmsal to the Sikhs of the modern period. The Sikhs are known to be a hard-working community. In Punjab, India and abroad they have earned the reputation of being successful industrialists and businessmen. In the Sikh diaspora, they have displayed an enormous capacity for rapid achievement in the economic sector of the so-called host societies. How do we explain the emergence of an ambitious class of Sikh millionaires? The answer lies in their commitment to the ethical principles of kirat karo, naam japo tey (and) wand chhako, and haq halal.

Creation of wealthy towns for the communities

The Gurus encouraged the creation of wealth by establishing the new townships of Amritsar, Taran taran and Kartarpur. They invited traders, artisans, craftsmen and shopkeepers to the new towns. As a result of this strategy Amritsar and Kartarpur emerged as flourishing trade centres.

As discussed before, in Sikhism the world is perceived as the abode of God and a sacred place in which to practice dharma; it means that every Sikh ought to engage in righteous actions and contribute towards the general welfare of the society. According to Sikh teachings, a Sikh is not a passive spectator but an active participant in the struggle for social justice. The Gurus strongly rejected the notion of the hindu concept of sannyaas (renunciation of society) and Guru Nanak particularly reprimanded the yogis who preached and practised sannyaas and sought God in the forests. He praised those who lived amongst people and contributed towards achieving the ideal of dharmsal.

Although the Gurus encouraged the creation of wealth, they categorically rejected unethical means to accumulate wealth. For example, the Rehat Maryada (Sikh code of discipline approved by the Supreme Management Committee of Gurdwaras in the Punjab) strongly disapproves of gambling as it contravenes the principle of kirat karni (earning one's living by honest work).

It is also significant to note the notion of daswandh (literally, reserving one tenth of one's earnings for charitable purposes) has become an integral part of Sikh tradition. For example, we can see its impact on the Sikh community in Britain. There are more than two hundred gurdwaras in this country which have been established through voluntary contributions. In Southall, a new purpose-built gurdwara was officially opened on the festival of Vaisakhi this year; it is claimed to be the biggest gurdwara outside India.

As centres of religious and cultural activities gurdwaras are actively engaged in nurturing ethical values among Sikh youngsters and promoting inter-faith dialogue and understanding. Moreover, a number of educational and health care projects in Punjab and India are supported by the diaspora Sikhs. This is how the notions of wealth / maya and poverty/ humility - gareebi - are perceived by Sikhs.