Sikhism has been in India for over 500 years, beginning with the birth of its founder Guru Nanak Dev. The Sikhs are predominately located in Punjab, as well as, in many other parts of India and the world.

The birth of the Sikh religion 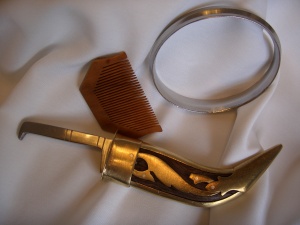 Kanga, Kara and Kirpan - three of the five articles of faith endowed to the Sikhs.

About 2% of India's population are Sikhs. Even so, the Sikhs, because of their unique appearance sometimes stand for India. Traditionally the men keep their hair and do not shave their beard or moustache. They gather their head hair in a turban. Sikhism is comparatively a new religion in India. This religion was established by Guru Nanak. Nanak was born into a Hindu family in 1469 in the Punjab region. Since childhood he loved to travel, learn and preach to humanity. In those days people who taught and preached were titled Guru meaning teacher, his followers came to be known as Sikhs - a word that means learners.

Guru Nanak's teaching, which were expanded on by the following Gurus, included beliefs from the two dominant religions in the Punjab region, Hinduism and Islam. Some claim that Guru Nanak tried to developed a new religion and included in it what he thought were the good beliefs of these two religions.[1]

Even as a child Guru Nanak had questioned ritualism in religion and spoke out for the equality of women, as he began his teaching, or spreading of what became Sikh philosophy, he sought to abolish casteism (varna), which held that even the shadow of some men could pollute men of higher castes. He found it ridiculous that people of the lower castes were not allowed access to education or even allowed into places of worship. Growing up he saw that his mother and sister were considered property (all women) and even worse, widows were often burned alive on their husband's funeral pyres - a practice known as Sati, as the wife's actions (karma) in former lives, was said to be the cause of her husband's death. Such silly superstitions have no place in Sikhism and everyone is considered to havee equal rights irrespective of caste, creed, color, race, sex or religion.

Sikhism also rejects pilgrimage (as a ritual that erases one's sins), fasting or punishing oneself (sitting in the hot sun or flailing one's skin). Such rituals have no place in Sikhism. Sikhism does not have a clergy class as it considers this as a gateway to corruption. However, they do have readers and singers in their temples and the serving of a warm vegetarian meal is a custom after Sikh religious services. Families of the local Gurdwaras often supply, prepare and serve these meals taking turns in serving their fellow men and women and any visitors. This communal meal which has since its initiation by Guru Nanak been served without cost is described further below. 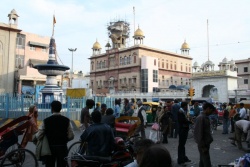 A Sikh place of worship is called Gurdwara. Sikhism does not support pilgrimage to holy sites because according to Sikhism, God is everywhere and not in any certain place. But Sikhism has a few important sites, of which, the Harmandar, also known as the 'Golden Temple' in Amritsar in Punjab is the most important site and is considered the holiest shrine of Sikhism.

Sikhism emphasizes community services and helping the needy. One of the distinct features of Sikhism is the common kitchen called Langar. In every Gurdwara has a Langar (some serve meals around the clock). Every Sikh is expected to contribute in preparing the meals in the free kitchen. The meals are served to all and are eaten sitting on the floor and this is to emphasis the point that all people are equal. Sikhism does not believe in holding fasts for the body is God's present to human beings and therefore humans must foster, maintain and preserve it in good sound condition, unless fasting is done to foster the human body like healthy diets., torture and death

Guru by the previous Guru Nanak who established Sikhism was its first Guru. He was followed by nine Gurus, each of whom was the highest religious authority for Sikhs. Each Guru was selected by the previous Guru. The Tenth Guru, Guru Gobind Singh, proclaimed that after him the Guru of the Sikhs would be the holy book of Sikhism, the Guru Granth Sahib.

The Guru Granth Sahib is written in Gurmukhi script. It includes the writings of the Sikh Gurus and the writings of Hindu and Muslims saints. Out of humility Guru Gobind Singh did not include his own writings in the book he had proclaimed as the permanent Guru of the Sikhs. His writings appear in a separate book called Dasam Granth. Guru Gobind Singh is also the Guru behind the unique appearance of Sikh men.

Sikhs combat with the Mughals

Long before the birth of Guru Nanak, the rulers of Punjab and much of India were Muslims. But Hindu Kings still controlled many areas of India. They were of the traditional warrior caste - the Kshatriyas (Khatris), but they too were defeated by Babar (who once released Guru Nanak from interment during his invasion of the Punjab and Northwestern India), who turned them into his subjects. His descendants founded the Mughal Empire. Emperor Akbar visiting a Sikh Guru was impressed by the Sikh Langar and he is said to have given the land (a jagir) that grew to become Amritsar. Akbar's son however, was ultimately responsible for the arrest, torture and death of Guru Arjan Dev - the first Silh Martyr. Guru Arjan's son - Guru Hargobind raised an army which defeated Mughal forces in several battles though he hunted with a Mughal Emperor and is said to have saved him from a tigers attack.

Guru Tegh Bahadur was the second Sikh Guru to attain Shahadat. He was sentenced to death by Aurangazeb whose fanatic followers had harassed the Hindus, seeking to convert them to Islam. Guru Teg Bahadur Sahib stood up to Aurangzeb on behalf of the Pandits of Kashmir, giving his life. Thus he is known as Hind Di Chadar.

His son, Guru Gobind trained his Sikhs in the Marshall arts, turning, as he said, sparrows into hawks. He created a community of fighters, asking for horses and arms rather than alms. He created the Khalsa, giving his followers the name of Singh (Lions) for men and Kaur (Princess) for the distaff side. All were baptised with Amrit, becoming Saint-Soldiers. "Singh" as a surname was the traditional male name for the Hindu warrior caste of the the Rajputs. Some of the first Sikhs were born as Rajputs.

Creating an Identity for the Sikhs

A Sikh man wearing a turban

In order to make it easier for his followers to recognize each other and more importantly to be easily recognized, Guru Gobind Singh, chose five marks, some of which even today symbolize Sikhs. The five signs were, uncut hair Kesh; a bracelet on the right hand wrist Kara; comb Kanga shorts Kaccha and sword or dagger Kirpan;. The religious Sikhs dress according to Guru Gobind Singh's order, carrying a sword (kirpan). Most of the Sikhs even today have uncut hair and gather it in a turban. But some Sikhs today cut their hair or they do not gather their uncut hair in a turban.

The emphasis on militant tradition and community service in Sikhism continues even today and many Sikhs serve in the Indian army or police. The Sikhs also have a reputation as experts in steering, from cars to airplanes.They were among the first communities in India who dared to drive vehicles specially lorries. India being a vast country needed drivers who could also travel at night. But many Indians believed in superstitions , such as ghosts and haunted places, because Sikhs rejected such silliness, travel at night wasn't a problem, since then they have gained the reputation as the steering masters of India."

The 1984 Anti-Sikh Massacre took place in India after the assassination of Indira Gandhi on October 31, 1984. India's Prime Minister Indira Gandhi was assassinated by two of her Sikh guards acting in the aftermath of Operation Bluestar. After the Prime Minister's death the next 4 days became one of the most brutal times for the Sikhs because they were being attacked by mobs, many even organized by Congress leaders who even supplied address lists of Sikh homes and bussinesses.

Sikh population by each Indian state 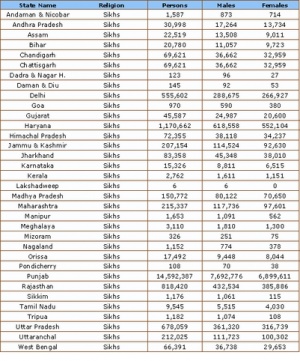 Sikh population by each Indian state