From SikhiWiki
(Redirected from Rajni)
Jump to navigationJump to search 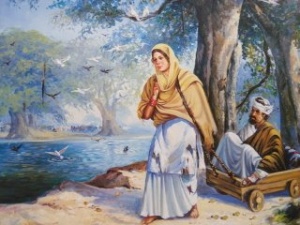 Bibi Rajni pulls her ill husband in a small cart

In the era of Guru Ram Das Ji, one cannot leave out Rajni, the youngest 7th daughter of Rai Duni Chand, a revenue collector (kardar) of Patti. Rajni was a Sikh, a disciple of the Guru. One day she was sitting with her sisters admiring some new clothing they all had received from their father. The girls were ecstatic and exclaiming how good their father was to them.

Rajni observed that all gifts are ultimately from God. Their father was merely an instrument of His greatness.

Unfortunately for her, her father overheard her comment and became very angry. It was not the first time that she incurred his wrath because of her extreme piety. The infuriated father, believing her to be an ungrateful wretch, got her married to a leper with a taunt so he would see how her God would help her lead a normal life. The leper was severely disfigured and a foul smell came from his body. The poor girl had accepted her fate unchangingly and worked hard to maintain herself and her crippled husband.

She kept repeating the name of God (Naam Simran), and was certain that God was testing her with this turn of events. She was forced to beg for a living. Still she bathed, fed, and cared lovingly for her leper husband, never losing faith.

Although the word 'husband' in Gurbani refers to the Lord and 'wife' refers to all of us; it is, however, important here as Bibi Rajni was a person who had accepted the light of the Lord in her husband as well and her service to her husband had a special meaning and a form of service to God; it was not just subversion to the male gender as was commonly practised by the general community in those times.

It is written in the Guru Granth Sahib, "Says Nanak, she who looks upon the Transcendent Lord as her Husband, is the blessed 'satee'; she is received with honor in the Court of the Lord.(4)(30)(99) " (SGGS p185)

At the time of holding the ‘pula’ the bride is promising to:

"Beloved husband if you take my hand; I shall never forsake You." (SGGSJ Ang 322)

"Husband – if you are holding my hand in marriage then I will not leave your side until the day I die." 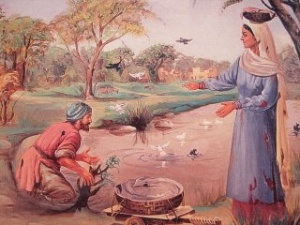 One day, she reached the site of a pool on her way to a neighboring village. Placing the basket, containing her husband by the side of the pool, she had gone off on an errand, most probably to look for food. In the meantime, her crippled husband had seen a black crow dip into the water of the pool and come out white. Amazed at this miracle, the man crawled up to the edge of the pool and managed a dip. He found himself completely cured.

When his wife returned, she was amazed to find her husband in good health. He was handsome and whole. At first, she was alarmed and suspected that he might be a different person. He had, however, kept one finger with leprosy marks, the finger that was un-dipped. He showed her the diseased finger as proof of his identity. 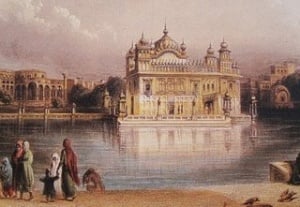 The couple thanked God, and went to the Guru to seek his blessings.

The pool was the future site of the Sri Harminder Sahib or Golden Temple in Amritsar, Punjab, India. The medicinal properties of the water were said to have come from Basil (Tulsi), which grew in abundance on its banks. Guru Amar Das Ji used to pick the herb there to make poultices for an infected toe that plagued Guru Angad Ji. The legendary importance of the site highlights the medicinal properties of the waters of the pool (Sarovar); Rajni's leper husband was cured there.

Sakhi shows us that if you keep faith in God, then one day, all the rewards are showered on us. Bibi Rajni had always kept her faith in Guru and God; she was happy with whatever she had and thus was rewarded at the end.

Bibi Rajni, was known for her unmatched dedication, and rewarded the community through the construction of the sacred pool of Sri Harminder Sahib in Amritsar.

Bibi Rajni became the mother of seven Sons, the eldest first, was named as Bhai Gurmukh, by Guru Ram Das Ji himself. Guru Ram Das Ji told her husband, Bhai Mohan to start doing trading of clothes. Duni Chand, who had a very big loss in his trade, became poor, living his last days with Bibi Rajni. Duni Chand, the link below http://www.sikhiwiki.org/index.php/Duni_Chand#Duni_Chand.27s_mind_is_awaked.21