From SikhiWiki
(Redirected from New Delhi)
Jump to navigationJump to search 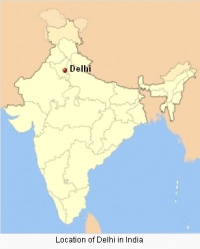 Delhi ( Punjabi: ਦਿੱਲੀ ) is the capital city of present-day India, and was the capital of many kingdoms in South Asia, in the past. Many would call it the heart of India. This is interesting since in several South Asian languages dil means heart. It has a rich and varied culture. Occupied at various times by many different empires it has been destroyed and rebuilt many times under various names. Perhaps the first city developed near current Delhi and New Delhi is the ancient city of Hastinapur (City of the Elephants). Near Delhi at Panipat and Kurukshetra many decisive battles have been fought for the control of India. Including the Epic battle depicted in the Bagavad Gita.

Historically, Delhi is very important for the Sikhs as many important Gurdwaras are located here. Many Gurus honoured the city during the period of the Sikh Gurus, including Guru Nanak Dev Ji. Guru Hargobind was lauded in this city, having stayed several times at a Gurdwara near Delhi. Guru Har Krishan died here while tending, not only his own his own plague struck followers, but the teeming masses of the plague struck city, as well.

The Great Guru of peace Guru Tegh Bahadur was executed in Delhi's Chandini Chowk, after he had publicly challenged Emperor Aurangzeb's scheme to force the Pandits of Kashmir to accept Islam, as part of his to banish Hinduism (and all religions, save Islam) from India. (To read more on the the Martyrdom of Guru Tegh Bahadur Read more here).

In Guru Tegh Bahadur, Banda Singh Bahadur, Jassa Singh Ahluwalia, Bhai Baghel Singh, Bhagat Singh and many others we find the gritty determination to root out the tyranny of injustice from this sacred land of the saints; their blood and sweat soaked into the soil of this historic city. Was it not for these determined souls of the Lord, the city would not have the independence, democracy and freedom that is enjoyed by the city dwellers today - One hopes that this fact will always be remembered by the residence as they go about their daily carefree lives now and in the future.

The mass murder of Sikhs in Delhi

The streets of Delhi were also witness, after the long siege at Gurdas Nangal, to a macabre parade, led in a mocking version of a grand Mugal's entrance to Delhi, by a huge elephant carrying a caged Banda Singh Bahadur, his young son in his lap, followed by his starved and dying companions, with their ranks swelled by thousands of hapless Sikhs gathered from their villages in the long march to Delhi. A march that included columns of Mughal soldiers, each of whose spears carried the head of a fallen sikh. The well documented event (recorded by even 'foreign hands') relates that lacking enough footmen with spears, that wagon loads of Sikh heads would bring up the rear of the gruesome display of man's inhumanity to his fellow man; one of the most gruesome bits of savagery in man's recorded history.

Delhi was also host to Guru Gobind Singh's wife Mata Jito Ji and the mother of the Khalsa Mata Sahib Kaur, who lived out their days in a local Gurdwara. It was in Delhi that Mata Sundri appointed Baba Deep Singh, the great Sikh Giani (scholar) and warrior, who had seen to the safe passage of the two women ( so elemental to Sikhi) to Delhi, during the bitter flight from Anandpur Sahib, as the first Granthi of Damdama Sahib.

In the waning years of the Mughal Empire, Delhi and its Mughal Emperor were under the control of Bhai Baghel Singh, a great general of the Karorsinghia Misl, who is still celebrated as the vanquisher of Mughal Delhi. The Karor Singhia Misl was one of the misls under the Dal Khalsa, which was headed by Sardar Jassa Singh Ahluwalia.

While in command of Delhi, Baghel Singh built many of the now famous Sikh Gurudwaras in honour of those who fell here or have an important connection to the city. These Gurdwaras include:

Sikh Refugees to Delhi In 1947 Partition

An estimated 25 million Hindus, Muslims and Sikhs (1947-present) crossed the newly drawn borders to reach their new homelands. These estimates are based on comparisons of decadal censuses from 1941 and 1951 with adjustments for normal population growth in the areas of migration. In northern India - undivided Punjab and North Western Frontier Province (NWFP) - nearly 12 million were forced to move from as early as March 1947 following the Rawalpindi violence. The Sikhs of Delhi, were mainly from the western Punjab districts of Gujranwala, Shiekhupura, Rawalpindi, Jhelum, Attock, Khushab, Mianwali, Shahpur, Multan.

Delhi received the largest number of refugees for a single city - the population of Delhi grew rapidly in 1947 from under 1 million (917.939) to a little less than 2 million (1.744.072) between the period 1941-1951.[23] The refugees were housed in various historical and military locations such as the Old Fort Purana Qila), Red Fort (Red Fort), and military barracks in Kingsway (around the present Delhi university). The latter became the site of one of the largest refugee camps in northern India with more than 35,000 refugees at any given time besides Kurukshetra camp near Panipat.

The camp sites were later converted into permanent housing through extensive building projects undertaken by the Government of India from 1948 onwards. A number of housing colonies in Delhi came up around this period like Lajpat Nagar, Rajinder Nagar, Nizamuddin, Punjabi Bagh, Rehgar Pura, Jungpura and Kingsway.

A number of schemes such as the provision of education, employment opportunities, easy loans to start businesses, were provided for the refugees at all-India level. The Delhi refugees, however, were able to make use of these facilities much better than their counterparts elsewhere.

Massacre of Delhi Sikhs In 1984

On November 1, 1984, a huge mob from the suburbs of Delhi descended on various localities where Sikh homes and bussinesses were concentrated. They were armed with iron rods, knives, clubs and some carried combustible materials, including kerosene. They had been given official lists of voters, that listed the addresses of houses and businesses belonging to Sikhs. The mobs swarmed into Sikh homes, brutally killing men, women and children.

Their houses and shops were then ransacked and burned. The regions most affected were neighborhoods in Delhi, but in and out of Delhi, crazed mobs stopped buses and trains, pulling out Sikh passengers who were lynched or doused with kerosene and burned alive.

Main article: 1984 Massacre of Sikhs for more about the state-sponsored massacre in Delhi and elsewhere.