From SikhiWiki
(Redirected from Nawanshahr)
Jump to navigationJump to search

Nawanshahr is the capital of Nawanshahr District, Punjab, India. Nawanshahr town is said to have been built during the reign of Alaudin Khilji (1295-1316) by his Afgan Military Chief Nausher Khan. Previously it was called "Nausar" but with the passage of time, the town came to be known "The Nawanshahr". Nausher Khan had constructed five forts known as Havelis, whose remains still exist.

Nawanshahr district was carved out of Hoshiarpur and Jalandhar districts of Punjab in November 7, 1995 on the auspicious occasion of birthday of Sh. Guru Nanak Dev Ji as the sixteenth district of Punjab State. District name has been derived from the head-quarter town of Nawanshahr. Nawanshahr town is said to have been built during the reign of Alaudin Khilji (1295-1316) by his Afgan Military Chief Nausher Khan. Previously it was called "Nausar" but with the passage of time, the town came to be known "The Nawanshahr". Nausher Khan had constructed five forts known as Havelis, whose remains still exist. 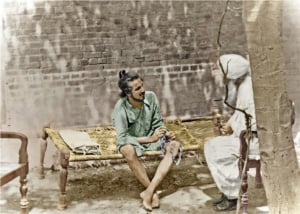 October 3rd 2008 Nawanshahr District of Panjab, was officially changed to Shaheed Bhagat Singh Nagar. A special coin was also released to commemorate Shaheed Bhagat Singh. But unlike the unveiling of the larger than life statue installed recently in Delhi, where the famous Shaheed was sculpted with a beard and dastaar, the coin has been designed with the now famous image of Bhagat Singh in his 'european disguise' which he donned on two occasions to save his life. Members of his family and no doubt many others, argued that the statue should have featured the Indiana Jones style hat with a mustache, including some of the Shaheed's on family members. Sikhs had worked to insure the sculpture showed the Bhaghat in a Turban.

According to the speakers at the event, the move by the Punjab State Government to rename Nawanshahr was a great idea to honor the life of Shaheed Bhagat Singh. Although different organizations from throughout Punjab had cherished the move to name the district in Shaheed Bhagat Singh’s name, the released of the coin raised another controversy when the attendees refused to accept the large plaque depicting the coin, because of its being imprinted with the now famous photo of Bhagat Singh with a haircut, no beard and 'the hat'.

Speakers at the event appealed to the Union Tourism Minister Ambika Soni, to make amendments to the picture on the coin. Soni was present at the event and witnessed the controversy that sparked after the coin was released. Feeling humiliated, Soni held that the Congress had also brought up the issue of the hat and it would be raised with the Union Finance Ministry as soon as possible.

From the Panthic Weekly October 3rd 2008

In the past, the many monuments in the memory of Shaheed Bhagat Singh have had pictures of him sporting a turban--the launch of the coin with Shaheed Bhagat Singh’s haircut is an erroneous move. According to historical sources, although Shaheed Bhagat Singh was an atheist, after meeting with Bhai Sahib Bhai Randhir Singh (Narangwal), he expressed his wish to become a baptized Sikh. The Arya Samaj leaders however fail to accept this well-documented fact as it hurts their philosophy.

It is also stated that Shaheed Bhagat Singh’s last desire to become a baptized Sikh was never accepted by the British but he stopped cutting his hair out of respect for the Sikh religion. By the time his execution was carried out, he had grown long hair. A picture of him taken just a few days before his execution shows him sporting a hair bun and uncut beard. If the Indian authorities want to honor Shaheed Bhagat Singh, the true honor would be to promote his image in the way he wanted: as a Sikh with uncut hair, sporting a turban.

At the event, speakers also asked the Punjab Government to safeguard different places that are associated with the lives of martyrs in various incidents including Jalian Wala Bagh, Babbar Akali Lehar, Kamagata Maru and others. With a lack of government attention, such places are being ruined as people do not understand the importance of maintaining them.

People of this district are economically sound. Large numbers of families from the district have settled in countries like Canada, UK, and USA etc. Consequently huge remittance is being received by their kith and kin back in India which contribute to the economic development and prosperity of the district.

All the towns and the villages are well connected by roads. Nawanshahr has also rail track connecting it with Jalandhar, Rahon and Jaijon. District enjoys the rare honour of being the birth place of Shahid Bhagat Singh whose ancestral village Khatkar Kalan falls in it.

This Doaba area, beautiful amalgamation of plane and hills, has several religious places. Even in today’s modern world people believe in spiritual and religious activities. This piece of land has blessings of many Saints, Guru’s, Peer’s and Faquir’s. Many Gurudwaras, Temples and Mosques had been built in different parts of the district in their memories.

Nawanshahr got district status after a long and consistent struggle by its people. The main credit goes to Late Sh. Dilbag Singh former Agricultural and Forest Minister Punjab who actualized the dream of the people of Nawanshahr. He was a known personality and was first elected as a Member of Legislative Assembly from Banga Assembly Constituency in 1962. Since 1967, he had contested election from this constituency and had raised his voice in favour of achieving district status for Nawanshahr. The district got many kinds of facilities, concessions and opportunities to develop due to great endeavour by this legendary personality. Many villages were covered under Unnat Gram Scheme in 1968. Also, the Nawanshahr Cooperative Societies Sugar Mill Ltd., came into existence in the same year. The other major tasks accomplished during his time were enormous. To mention a few such as all the villages of the district got electrified under ‘Rural Electricity Project’, construction of link roads, construction of new schools and upgradation of many schools, provision of health services in each block of the district, sanctioning from govt. an Industrial Training Institute and college for the district and promoting industrial units establishments in the district.

Beant Singh Government constituted a committee to work out the feasibility of elevating Nawanshahr District whose chief was S. Hardyal Singh, IAS. But due to departure of S. Hardyal Singh abroad, this work was handed over to Sh. A.S.Punni, IAS. In his report he strongly recommended creating Nawanshahr, a new district. With many ups and downs and regular coherent struggle at last on November 7th, 1995 S. Harcharan Singh Brar inaugurated this new district of Punjab.

The prosperity of Doaba area can be appreciated by the fact that price of land here is sky-scraping and almost far more than the rest of the districts in the state. This is merely because of the foreign currency sent by the NRI Punjabi people who have settled abroad.

This region has abundant Health facilities. Here private clinics and nursing homes not only surprise with their numbers but also some of them claim to have latest medical equipments. There are adequate number of Government Hospitals, Dispensaries and Primary Health Centers in this area. The hospitals in Nawanshahr have capacity of 64 beds and are equipped with latest medical tools. Banga and Balachaur hospitals are having capacity of 30 beds each. Also Mukandpur, Sujjon, Saroya and Muzzaffarpur are provided all kinds of health services. Even for every village of the district health services are available. Vetinary hospitals are available in Nawanshahr, Rahon, Saroya and Balachaur.

Honor of establishment of Blood Donors Council goes to Professor Hajari Lal Bansal who is a well-known social activist and father of the blood donate revolution in Punjab. Sh J.B.Goyal, the then District Magistrate and Dr. Jasvinder Singh (Raja Hospital) also helped in forming the council. Blood Donors Council is the one and only one self controllable institution for which Punjab Government has provided services of separate medical officer. This is also the single institution that has the power of a blood bank.

Nawanshahr district is situated in 31.8• N and 76.7• E part of Punjab on the right bank of mighty river Sutlej. The Distance of State capital Chandigarh (Known as the most beautiful and planned city of India) from the district is of ~92 Kms. Nawanshahr District is surrounded by four districts. The west border of the district touches Jalandhar, east border touches with RoopNagar (Ropar) district, the northern border of the district meets with district Hoshiarpur and in south it touches with Ludhiana (known as the Manchester of India) and Kapurthala District.

The Nawanshahr district is one of the smaller districts of Punjab and is having an area of 125833 hectares consisting of population of 586637 as per 2001 census (provisional). The land of District Nawanshahr is fertile due to the presence of river Sutlej and irrigated through tubewells and canals except some part of the Balachaur sub-division falling in Kandi Area.