From SikhiWiki
(Redirected from Kaam)
Jump to navigationJump to search 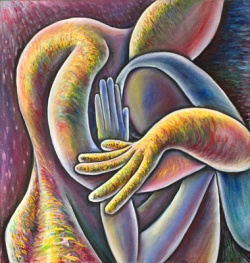 KAM (Gurmukhi: ਕਾਮ) is derived from Sanskrit: काम where it means pleasure, sensual gratification, sexual fulfillment, pleasure of the senses, desire, eros, or the aesthetic enjoyment of life. In Gurbani it has the meaning deep desire, uncontrolled longing, concupiscence, lust, sensuality or lasciviousness and is counted among the five cardinal sins or sinful propensities.

In common usage, the term stands for excessive passion for sexual pleasure; a disproportionate emphasis of ones daily life on the pleasures of a sensual nature and it is in this sense that it is considered an evil in Sikhism. The Guru states clearly "Engrossed in lust and anger, people wander through reincarnation over and over again" (SGGS p 50)

In Brahmanical literature kam is not always disdained. Kam as Kamadeva is a god in the Hindu pantheon comparable to Eros of Greek mythology and Cupid of the Romans, and is as such not contradictory to spiritual life.

The Gurus rejected Brahmanical superstition as well as self-mortifying austerities. Yet they recognized the four purusarthas, referred to in gurbani as char padaraths or the four human pursuits. However, in Sikhism, kam is not unrestricted gratification of carnal desires, but an impulse which needs to be kept under check like other impulses and passions.

Unrestrained propensity towards kam, especially sexual relationship outside the marital bond, is condemned in the strongest terms in Sikh codes of conduct as well as in the Scripture. When uncontrolled, Kam is a destructive evil and a deadly sin which needs to be recognised and controlled not suppressed and denied. Sikhi does not support the life of a recluse or Sannyasa where a person denies the existence of this natural instinct of the body. Sikhs are expected to live a life of a householder with adult members living a life as married couples engaged in a moderate but healthy sexual relationship.

Kam (gratification of desire) is in Hinduism one of the four objectives (purusarthas) of human life, the other three being artha (acquirement of wealth), dharma (discharge of duty), and moksa (final emancipation). Jainism and Buddhism, which arose as protest movements against Brahmanical ritualism and superstition, however looked upon kam with horror.

For munis and sramanas of Jainism and Buddhism and for yogis of the Sankhya school, kam was to be deliberately suppressed to achieve ultimate release. As a result, they preached celibacy and asceticism.

The five evils ones

The five evils or five thieves or panch doot (five demons) or panj vikar (five sins) as they are referred to in the Sikh Scripture, Guru Granth Sahib, are according to Sikhi, the five major weaknesses of the human personality at variance with its spiritual essence. These are the five traits that bring misery and pain the our lives; the Guru Granth Sahib asks us to overcome these internal demons and clasp the virtues of the "Super soul".

The common evils found in mankind far exceed this number, but a group of five of them came to be identified because of the major obstruction they are believed to cause to man's pursuit of the moral and spiritual path. The other four evils in the group of five are:

Together these five are the ones that need to eradicated from our persona so that we can live a life without the pain and misery that results from the company of these five vices.

To quote Guru Arjan, Nanak V: “O Kam, thou landest people in hell and makest them wander through many births, enticest all minds, swayest all the three worlds and undoest one's meditation, austerities and restraint. The pleasure is ephemeral and thou afflictest high and low alike" (GG, 1358).

Guru Tegh Bahadur Nanak IX, says: "In the sinning heart reigns kam and the fickle mind breaks out of control. Kam casts its noose even upon yogis, jangams and sannyasis. Only those imbued with God's Name (fall not a prey to it) and are able to go across the ocean of existence" (GG, 1186).

Bhai Gurdas describes an ideal Sikh as one who is loyal to his wife and "regards all other women as mothers, sisters and daughters" (Varan, XXIX. 11).

Guru Gobind Singh also said: "Love your own wedded wife ever so more, but do not go to another woman's bed even in a dream." Sikh codes of conduct strictly prohibit extramarital relations.

While prescribing self-control and restraint and not total annihilation of kam, the Gurus suggested two ways of channelizing and sublimating it. On the one hand, they pronounced grihastha or married life to be the ideal one, and, on the other laid down love of God and absorption in His Name as the essential principle of spiritual discipline.

Says Guru Gobind Singh "Hear ye all, I proclaim here the truth: only they who love God find Him." The image of a devotee most common in Sikh Scripture is one of a wife deeply in love with her "kant" or husband presently separated from him, and waiting, craving, praying for a reunion with him. Such fervent devotion cannot but bridle the wayward passion in man. According to Guru Arjan, a person who has cultivated the love of the Lord’s feet would desire neither kingship, nor worldly power, nor even mukti or liberation (GG 534).

In the following Shabad, the Guru explains in very clear terms that lust and wrath will eat away the body away just as borax dissolves and eats away pure gold. So the pure God-given body will be wasted away if one allows the mind to be overcome by rage, anger or lust. One is given a very clear warning to guard oneself from these negative emotions.

Above adapted from article By L. M. Joshi