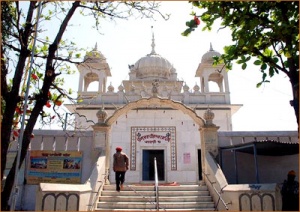 Gurdwara Hira Ghat Sahib is about nine kilometers downstream from Nanded where Guru Gobind Singh first pitched his tents right on the bank of River Godavari. This Gurdwara stands on the northern bank of the river. A small but beautiful Gurdwara has been erected at this historic location. It is on a high platform approached by over a dozen steps. The building is surrounded by tress and greenery and situated in a pleasant and comfortable location. It was here that the tale is told about Guru Gobind Singh and Bahadur Shah.

A legend similar to the one associated with Gurudwara Nagina Ghat Sahib is also related to this shrine. Here it was the emperor Bahadur Shah who presented to the Guru a bira (diamond) which the Guru flung into the river, and asked the offended emperor to look into the river, where the latter saw heaps of diamonds. The emperor was deeply impressed and he bowed to the Guru with humility. The only difference is that at Nagina Ghat Sahib, a devotee had come with present of Nagina, whereas at Heera Ghat Sahib, the visiting person was Emperor Bahadur Shah, who had come from Golkonda side and presented a very beautiful ‘Hira' i.e. diamond to the Guru.

Again Guru Sahib didn't take a serious notice of the so-called precious present and threw it into the Godavari River passing side by. The king was also surprised at the Guru's fete and when on latter's instructions tried to fetch out his diamond from the river, he also found the river full of so many diamonds, even more precious than his offering. The emperor realized that at Guru Nanak's Darbar there was no shortage of any kind and the glittering wealth does not tempt the Sikhs and in other words it serves at the doors of Sikhs community.