From SikhiWiki
(Redirected from River Godavari)
Jump to navigationJump to search 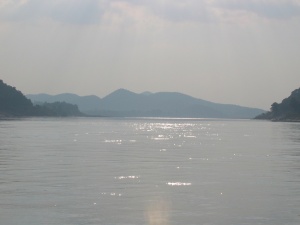 A major waterway of central India, the Godavari originates in the Western Ghats and flows eastward across the Deccan Plateau between the states of Maharashtra and Andhra Pradesh. Leaving Andhra Pradesh the river turns, flowing to the southeast until it empties into the Bay of Bengal through two mouths. Its tributaries include the Manjira, Indravati, Bindusara and Sabari Rivers. Although the river arises only 80 kilometres from the Arabian Sea, on the West side of India, it flows 1,465 km to empty into the Bay of Bengal.

Just above Rajahmundry the mighty river has been damed to provide water for both irrigation and the generation of hydro-electricity. Most of the river’s water is drawn for irrigation purposes. Below Rajahmundry, the river divides into two streams that widen into a large river delta which has an extensive navigable irrigation-canal system. Called the Dowleswaram Barrage this canal system links the region to the Krishna River delta to the southwest.

The Godavari River has a drainage area of 4,405 sq.km that includes more that one state. The Manjra river is its major tributary.

Major Towns and Cities along the river

Like any other of the major rivers in India, the banks of this river have many pilgrimage sites.

It is believed that the sage Vyasa wrote the Mahabharata on the banks of Godavari at this location, and thus the place came to be known as Vyasara.