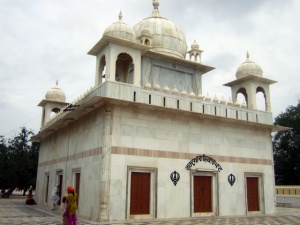 Gurdwara Shikar Ghat Sahib, is a beautiful piece of architecture perched on a low hill about 300 metres from the river bank with higher wooded hills in the background. Its distance from Takhat Hazoor Sahib by road across a bridge built over the Godavari though kar-seva is about six kilometres.

A legend is associated with this shrine, too. It is said that Guru Gobind Singh came here following the chase (shikar) and killed a rabbit which in a former birth had been Bhai Mula, a Sikh contemporary of Guru Nanak Dev. Bhai Mula belonged to Sialkot (now in Pakistan). He had once accompanied Guru Nanak Dev during his travels, but when Guru Nanak Dev went to see him on another occasion, Mula avoided the Guru and hid himself for fear that the Guru might again take him away on a long journey. Guru Nanak Dev went away, but Mula died soon after of snakebite. His repentent soul had since been wandering in different sub-human bodies until, so goes the legend, Guru Gobind Singh emancipated it by the touch of his arrow.

The present building complex of Gurudwara Shikar Ghat Sahib was re-laid by Baba Jiwan Singh and Baba Dalip Singh Kar sevawale during the 1960s and early 1970s. The square sanctum, where Guru Granth Sahib is seated on a canopied throne of white marble, is in the middle of a square hall with walls covered with white marble slabs and ceiling with white glazed tiles. Above the hall, there is a dome over the sanctum, domed kiosks at the corners, and decorative domelets along the length of the walls. The entire exterior from the base upto the top of the dome is covered with white marble slabs. Even the pinnacle is of white marble. This Gurdwara at top of a small hill leaves a very healthy and ever lasting impression on the pilgrims visiting this holy spot.