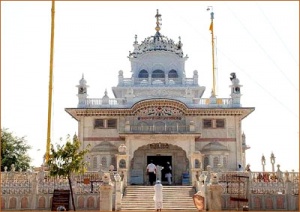 Gurdwara Nagina Ghat Sahib, is on the river bank, about 400 metres southwest of Takhat Hazoor Sahib. According to tradition Guru Gobind Singh attended by some Sikhs was standing here watching the river flow when a rich merchant, proud of his wealth, came and presented a costly nagina (precious stone usually for inset work ingold) to the Guru.

The present building standing on a high plinth comprises a square hall in which Guru Granth Sahib is seated on a canopied palaki of white marble, and a smaller square room topped by a dome on the first floor. It was constructed by Raja Gulab Singh Sethi of Delhi and was completed by his widow in 1968. 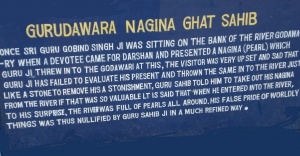 The Guru having received the precious jewel from Bahadur Shah, the son of the then Mughal Emperor, Aurangzeb, casually threw it in the river. bahadur Shah bore a look as if pitying the Guru who, thought he, despite his princely style was after all a sadhu who did not know the value of his present.

Guru Gobind Singh ji read his thought and bade him to carefully look down into the slow flowing current. What he saw, filled Bahadur Shah both with wonder as well as remorse at his evil thoughts about the Guru. He saw millions of jewels lying at the river bed. Purged of pride, he fell at the Guru's feet.