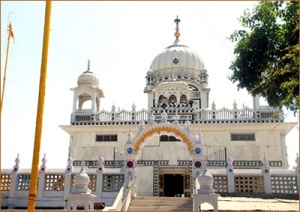 Gurudwara Banda Ghat Sahib, at Nanded, located about 400 metres upstream from Nagina Ghat, is the spot where Madho Das, a hot headed and headstrong Bairagi Sadhu, had his abode. Guru Gobind Singh had heard about him from Mahant Jait Ram of Singh Dadu Dwara. His original name was Lachhman Das. He was a native of Rajauri in Jammu and Kashmir.

Lachhman Das was born in a Minhas Rajput family on October 16, 1670 at Rajouri in the Jammu region of Jammu and Kashmir, Northern India. Wrestling, horseback riding, and hunting were his major hobbies. He was a very active and energetic child. A chance killing of a pregnant doe at his hands transformed him first into a remorseful sinner in search of redemption, and later, after having acquired some occult powers through austerities and single minded devotion to learning of such arts, into an arrogant recluse impatient with lesser mortals, Guru Gobind Singh, within a few days of his arrival at Nanded came to see him here, according to Bhatt Vahi sources on 3rd September 1708. Madho Das was not in his hermitage then, and the Guru decided to wait for him.

Meeting with the Guru

It is said that in order to test the Bairagi’s mettle, the Guru deliberatly provoked him by having two of Madhu’s goats slaughtered and cooked. This naturally put Madho Das beside himself with anger, as he returned to his hermitage and found trespassers and the sacrillege (Madhu was a lifelong vegitarian. His goats were both companions and providers of milk), and he at once attempted to better the Guru and bring him to his knees, but finding he could not mentally overpower the Guru, he took little time to realise and acknowledge the spiritual superiority of the Guru, at whose feet he at once surrendered. 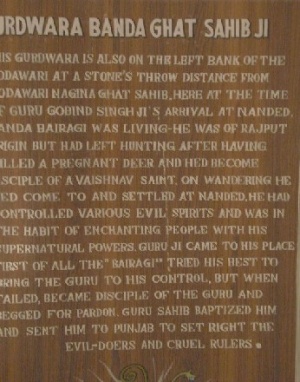 After this their first words to each other have been related thus:

The guru blessed him and raised him to his feet. He later administered Khande di pahul to Madho Das and renamed him Banda Singh (Gurbakhsh Singh--according to some sources), but the name Banda stuck and he is most remembered by his popular name--Banda Bahadur or Banda Singh Bahadur. During the next four weeks, the Guru instructed him in the essentials of Sikh faith, assessed his potential as a leader and briefed him about his impending mission. A few days before the attack on Guruji, Banda Singh was on his way to Punjab accompanied by five Singhs whose counsel, the Guru commanded he was to heed, although he would be the supreme commander in the impending campaign. Gurdwara Banda Ghat for short, was housed in a single square room with a covered circumambulatory passage around its exterior. Recently the Gurdwara has been reconstructed and modified.