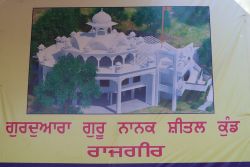 Rajgir (historically known as Rājagṛiha), meaning "the City of Kings", is an ancient city and a municipal council in Nalanda district of Magadh region in the Indian state of Bihar. Rajgir was known for its natural springs and it is said that it used to have 22 hot springs which in around 1500 all contained high sulphur content due to the local geology and chemical content of the soil in the region. As both weather and water were incredibly hot during summer, the residents of Rajgir desperate searched for some respite.

The tale of Sikh faith in Rajgir is woven around Guru Nanak's arrival in the town, on one of his pilgrimages. His first stop was the town's central attraction, the Brahma Kund, and upon interacting with the residents, he was earnestly requested to do something about the hot sulphurous water everywhere. It is said he calmly pointed at one of the 22 hot springs, declaring that the water there would now flow cold and pure. Ever since then, the water at the Guru Nanak Sheetal Kund has flowed cold, and while Rajgir does not host even a modest Sikh population, the up-and-coming gurudwara gets a steady flow of worshippers who pass through Rajgir on their way to other towns.

Another account states that Guru Nanak is believed to have a discourse with Buddhist and Jain monks and impressed upon the importance of devotion to God without renunciation: like a lotus. The city was surrounded by springs of hot water and cool drinking water was not available to the people. On the pointing out of the Guru, people dug a place and cool water gushed out. The historical spring is known as Nanak Kund.

Patna Gazetteer (1991) page 101 refers to Sikh Gurudwara at the Kund. Kund is recorded in revenue records at Khata No. 332 and Khatauni No. 7690 of Mauza - Rajgir, District - Patna (now district Nalanda). During the last forty years, mainly with the untiring efforts of Bhai Ajaib Singh, the Gurudwara has been maintained and developed. Another complex of about ten residential rooms has also been constructed with the funds provided by the Prabandhak Committee, the transporters and the Sangat of Gaya. Rajgir is fast developing as a socio-cultural center and Rajgir Mahotsav is organized every year. A large number of Sikh families from Mumbai and other parts of the country, which visit Patna for celebrating the birthday of Guru Gobind Singh every year congregate at Rajgir Gurudwara the next day. Here a special Diwan is held which is participated by local people also.

The absence of any mention of Nanak Sheetal Kund or the visit of Guru Nanak at Rajgir, in the original Biographies of the Guru (Janam Sakhis) has created doubts in the mind of some scholars about the veracity of traditional account of this historic place. On his way from Rajauli to Bhagalpur, Guru Nanak stayed at Rajgir, the old Rajgraha, said to be one of the oldest cities of India and had been the capital of Jarasandh. It is considered sacred because it had long association with Lord Buddha and Lord Mahavira. According to Surinder Singh Kohli, the place is famous in the history of Buddhism because five hundred Buddhist monks met here to fix the Buddhist canon. 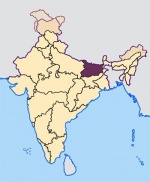 Bihar is located in the eastern part of India (between 83°-30' to 88°-00' longitude). It is an entirely land–locked state, although the outlet to the sea, through the port of Kolkata, is not far away. Bihar lies mid-way between the humid West Bengal in the east and the sub humid Uttar Pradesh in the west which provides it with a transitional position in respect to climate, economy and culture. It is bounded by Nepal in the north and by Jharkhand in the south. The Bihar plain is divided into two unequal halves by the river Ganga which flows through the middle of the state from west to east.

Patna Sahib is situated in Patna, the capital of Bihar. It was here that Guru Gobind Singh ji, was born in 1666 and spent his early years before moving to Anandpur. Patna is further honored by Sikhs as both Guru Nanak and Guru Tegh Bahadur visited the city.

As, Guru Gobind Singh ji, the last living guru of the Sikhs was born in Patna, the city is the second of the four great thrones of the Sikhs. There is also a museum here that exhibits photos, holy scriptures, and the personal possessions of the Guru.

The Gurudwara Harimandir Sahib (The Golden Temple) located in Amritsar is the most sacred shrine of Sikhism. 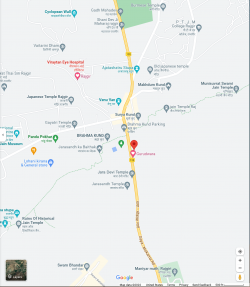