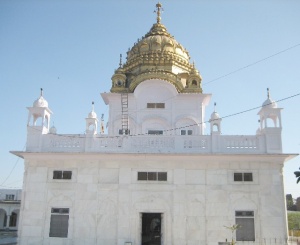 As its name implies, this shrine is connected with Guru Nanak, the founder of Sikhi. The Guru used to meditate on God by the well called "Ajita Randhawa da khooh" after his first udasi in 1506 . On the stage situated in the Gurdwara sahib, Guru Ji had discussion with Ajita Randhawa.

On the right (or west) bank of river Ravi Guru Nanak Dev founded the city of Kartarpur. At the age of seventy, Guru Nanak Dev Ji left for his heavenly abode from here. The Gurdwara is in the territory of Pakistan, but you can see it standing ashore the East bank of River Ravi or from the town Dera Baba Nanak at a distance of about 4 Kms. Kartarpur Corridor is now open for India Citizens. 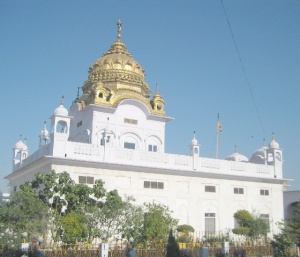 During the late 1800's, Maharaja Ranjit Singh provided a copper gilded throne to the Gurdwara and got its canopy covered with marble. The shrine is in the centre of the town and comprises three separate memorials. The well which originally belonged to Bhai Ajitta Randhava still exists and is reverently called Sarji Sahib. Pilgrims take its water home in the belief that it possesses curative properties.

The second memorial is the "Kirtan Asthan", a rectangular hall, which marks the site where Guru Arjan had sat rapt in Kirtan when visiting Dera Baba Nanak for condolence on the death of Baba Dharam Das. The Guru Granth Sahib is seated in the hall.

The final memorial is the central shrine, called Thara sahib. This marks the 'thara' or platform, on which Guru Nanak had sat when he first came to Ajitta's well and where, later, Baba Sri Chand buried his father's ashes. The Guru Granth Sahib is seated here in a small square pavilion with a pinnacled lotus dome under an overhanging gilded canopy. The whole pavilion is covered with gold-plated metal sheets with some of the hymns of Guru Nanak embossed on them.

The 'Thara sahib' is at one end of a recently constructed spacious hall, above which, over the sanctum, is a square domed room with an ornamental arched coping and domed kiosks at the corners. The entire exterior above the roof level of this room is covered with gold-plated metal sheets. The goldwork on top as well as on the sanctum was got executed in 1827 by Maharaja Ranjit Singh, who also made endowments in cash and land for the maintenance of the shrine.

Dera Baba Nanak being situated only 1 km from India-Pakistan border, Gurdwara Kartarpur Sahib can be seen from the Border with naked eyes at a distance of about 4-5 kms..

Administration of the shrine

The Gurdwara is administered by the Shiromani Gurdwara Parbandhak Committee through a local committee. Special divans take place on every amavasya, the last day of the dark half of the lunar month, and all major anniversaries, especially the one marking the death of Guru Nanak, are observed. But the most important annual event is the fair celebrating the Baisakhi festival.

A handwritten copy of the Guru Granth Sahib is preserved in this Gurdwara. It has 1660 pages, each page having a handsomely illuminated border.