From SikhiWiki
(Redirected from Bhai Lalo)
Jump to navigationJump to search 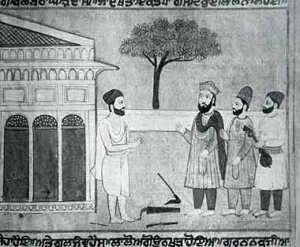 After teaching people in Lahore to live honestly Guru ji returned to Talwandi to see his parents. Then after a short stay, he proceeded with Mardana his companion on a long journey to visit the sacred places of pilgrimage of the Hindus. On the way they reached Bhai Lalo’s workshop at Saidpur presently known as Eminabad in Pakistan.

Bhai Lalo earned his living by honest work. He was born in 1452 at the village of Saidpur (Pakistan). His father's name was Bhai Jagat Ram of the 'Ghataura' surname pertaining to the carpenter clan, now known as Ramgarhia. Bhai Lalo was nearly seventeen years older than Guru Nanak. When Lalo saw two holy men coming towards him, he put aside his work and spread a bed for them and went to get some lunch for them.

Kitchen regarded most pure and clean 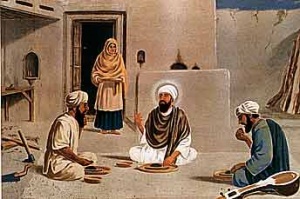 As the kitchen was supposed to be the most pure and clean place in a house, Bhai Lalo asked Guru Nanak to come there and have his meal. Guru ji said “Bhai Lalo, every place is clean and pure for us. Please bring the meal here.” So the meal was brought out and Mardana then divided it into three parts and they all ate it together. “This meal tastes like nectar. What has been put in it?” asked Bhai Mardana.

Guru Nanak replied “That was the sweet flavour of truthfulness and honesty that you tasted. This taste is above the tepid experience of worldly delicacies.” Guru Nanak taught the message of honest hard work as an essential part of ones duty to God. The other two important messages taught by the Guru were the remembering and reciting of God's name and also the sharing of ones worldly wealth with others who are less well off.

One day Malik Bhago, a high government official of the city, gave a general feast. He invited Guru Nanak too. Guru ji declined the invitation saying, "We are fakirs, what have we to do with your feast?" On being asked a second time, Guru Nanak took Bhai Lalo with him and went to Malik Bhago’s house. With great anger Malik Bhago said to Guru ji, “You are dishonoring Kshatriyas by eating dry chapaties in the house of a low caste carpenter. My feast will offer you delicious food. Why do you refuse to eat it?” 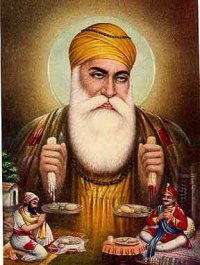 Guru Nanak took Bhai Lalo’s dry chapati in his right hand and Malik Bhago’s fried sweet pancake in his left hand. When he squeezed the right hand the people present there saw drops of milk dripping from it. And when he pressed the left hand with the Malik Bhago's fried pancakes, everyone saw blood trickling from it.

“Look Malik Bhago, wealth gathered by cruelty and corruption towards the poor is like sucking their blood which you have done. You had invited me to partake of blood, leaving food pure as milk. How could I accept it?” said Guru ji. Malik Bhago was silent then. Bhai Lalo on the other hand was the symbol of honesty and hard work. So according to Guru ji it’s better to earn little money with honesty than to amass a huge wealth by devious and crooked means.

The news spread that a Guru, who could challenge caste and authority, with such courage unknown before, travelled the countryside. More and more people came to listen to the enlightening words of Guru Nanak. Bhai Lalo was blessed by Guru Nanak Dev ji to spread the message of the Divine Name. He became a devout Sikh and preached the Guru's gospel to the people of Saidpur.

Guru teaches humility to the Sultan

Once the Sultan of Eminabad's son fell ill and could not be cured by any "vaid" or doctor. After a lot of search and trials by 'Faqirs', somebody suggested that Bhai Lalo, who also dealt in herbal medicine (Vedic), should be summoned. Coincidentally Guru Nanak was also present, when the Sultan ordered Bhai Lalo to tend to his son. Guru Nanak told the Sultan that to ask somebody to do something for one required humility and not stubborn commands. The Sultan's wife caught hold of Guru Nanak's feet and asked for forgiveness.

Guru Nanak asked Bhai Lalo to bring a piece of bread (roti) and herbs from his house. Having brought the bread and herbs, Guru Ji asked the boy to eat them. And soon the boy having eaten the "medicine" was cured of his illness. To the local people this was a miracle and this deed made the name of Bhai Lalo famous as a pious and saintly man. The Guru's singing self-composed hymns in praise of God, with the accompaniment of rabab by Mardana, attracted many people in Eminabad .

It was here that the Mughal Emperor Babar first met Guru Nanak, and Guru Ji blessed him with seven generations of rule (Suraj Parkash).It was also here that Guru Ji uttered the Gurbani Shabad of "Jaisi Mein Aavey Khasam Ki Bani, Tesra kari gyan vey Lalo. - As the Word of the Forgiving Lord comes to me, so do I express it, O Lalo" (SGGS p722). 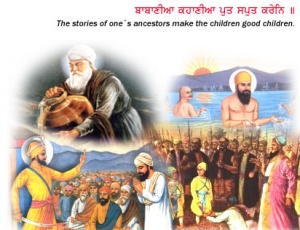