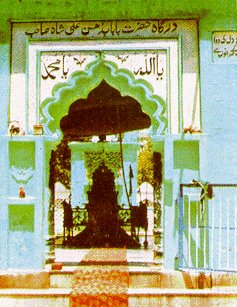 Peer Budhan Ali Shah, who some claim was born an Arab named Shams-ud-din, (Sun of the faith) was a Sufi Muslim Saint (some claim he lived to be more than 200 years old) He is also said to have been born in Talwandi (now known as Nankana sahib), the birth place of Guru Nanak sahib. He lived in the area of today's Kiratpur, long before the township was established.

Many myths have been written about him and two cities have shrines that claim to hold his remains. In Jammu City planes are said to dip in deference to his memory on landing and taking off. On each Thursday, his grave near the city's airport becomes the site of a huge Langar as people bring pots of Biryani, to the tomb of the beloved Sant who was a vegetarian his whole life.

Others say he was the model for Gandhi ji's diet his last years, as he subsisted only on milk from his goats that were milked by lions the Pir kept that were there shepherds and milkers as well. Such are the tales of this legend grown larger than life.

An old record mentions that on a black hill on Kehloor Mountain, there lived Pir Buddhan Shah, who had some goats. It is said that he also kept a lion, which would daily take the goats into the forest to graze. One day Guru Nanak visited to discuss spiritual matters with the Pir.

Noting it was about time for the lion to return with the goats, the Pir told the Guru he was worried his lion might attack him. Guru Nanak dev is said to have replied, "If your lion does not eat you why would he bother me." The Guru was not bothered and to the utter surprise of the Pir, as the lion returned, it bowed to the Guru and touched his feet.

Guru is offered a full glass of milk 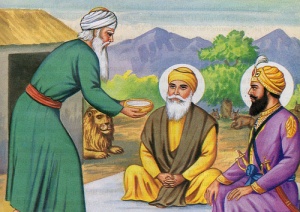 Seeing this the Pir realized the greatness of the personality of Guru Nanak. His host then offered Guru Nanak a full glass of fresh milk of which Guru sahib took only half of the milk and told Pir Budhan to save the other half of the same that he would ask for it in his future incarnation during the period of the sixth Padshahi, Guru Hargobind Sahib more than 60 years later. Another version of this story mentions that the future visitor being a Sikh by the name of Gurditta.

Guru Nanak also said that he would establish a town at the site one day. Years and years passed in waiting. The Pir grew very old. One day Guru Hargobind deputed his son Baba Gurditta to visit the Pir and accept the milk. Baba Gurditta reached him, and asked for milk.

The Pir who had been longing for the time felt very happy and asked him to establish a town at that very site. The town was developed and was named as 'Kirat Pur.' As the ancient Pir was praying for the Darshan of Guru Sahib, Guru Hargobind appeared. Pir Buddan Shah then expressed his gratefulness and left his body for his journey to eternity.

This lies at a distance of about 400 metres east of Gurdwara Baba Gurditta. Baba Buddan Shah was held in great reverence by Baba Gurditta. The legend is that Baba Buddhan Shah lived for as many as 800 years.

His tomb was built by Baba Gurditta, who is said to have remarked that whosoever visited his place would certainly pay homage at the tomb of Baba Buddan Shah. It is also said when Baba Buddan Shah was 500 years of age, Guru Nanak Dev met him at the place, where now Gurdwara Charan Kamal stands.

Visitors believe that a visit to the tomb has the power to heal skin diseases. People offer salt, mustard oil, jharu (broom) at the tomb of the Saint. A fair is held there in the month of October every year. 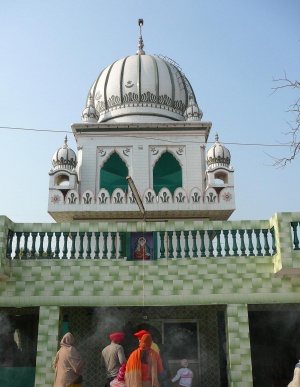 His real name was Shamsuddin. He lived a long life, presumably 500 years, so came to be known as Budhan Shah or Pir Baba Budhan Shah.

Tradition has it that he was born at Talwandi, the place of birth of Guru Nanak Dev Ji, now in Pakistan.

His early life is lost in the oblivion of History. Even traditions have nothing to say. Khawaja Abdul Ghani Goni writes, "Baba Budhan Shah was pious and given to prayer from the very childhood and a man of high character. He prayed for most of the time." We think, the virtues mentioned about him are similar to all the saints. He has written the characteristics simply by approbation. More may be added in the vein, for instance, he was truthful, absorbed in deep thoughts, achieved spiritual powers through painstakingly accomplished intrinsic practices, and exhibited miracles even as a child. Tradition has it that he took nothing except milk.

Folks retold in Jammu and Kashmir can be relied upon that the two holy- men were intimate, respected each other, and maintained closeness because of a common place of birth. They met often at different places. There is evidence to say that they might have discussed spiritual matters and exchanged their views. Once Pir Baba went to Anandpur Sahib to see Guru Nanak who invited him to stay there.

Pir Budhan Shah said, "How can two swords be kept in a scabbard?" Guru Nanak replied, "Whoever comes to Anandpur Sahib shall visit Kiratpur Sahib before." Arrival in Jammu

It is not exactly known when Pir Budhan Shah came to Jammu. But it can be said for certain that he arrived here after Pir Roshan Ali Shah and Pir Mitha in the fifteenth century and is one of the Muslim holy men who reached Jammu prior to the Muslim invaders. Disclosures

Khawaja Abdul Ghani Goni discloses that Pir Budhan Shah was an Arab and refers to the Tarikh-e-Decan for his arrival in the eleventh century and says that he brought coffee seeds with him. He further refers to Budhan Shah hills in Mysore to make his opinion. Further researches may open newer vistas in this matter.

Durgah Peer Budhan Ali Shah is the place where lakhs of people visit every year.