From SikhiWiki
Jump to navigationJump to search
Pir Buddan Shah 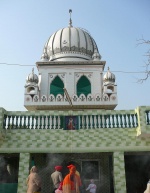 It is mentioned that on a black hill on Kehloor Mountain, there lived Pir Buddhan Shah, who had some goats. It is also said that he also kept a lion which daily took the goats grazing into the forest. One day Guru Nanak visited him and discussed spiritual matter with the Pir.

As the time for the return of the lion was approaching, he asked the Guru to leave, as the lion might attack the Guru. But to his utter surprise, as the lion returned it touched the feet of Guru Nanak.

The Pir realized the greatness of the personality of Guru Nanak and offered him some fresh milk. Guru sahib took half of the milk and told him to preserve half of the same that would be taken by his Sikh Gurditta by name, who might visit him one day. .....More