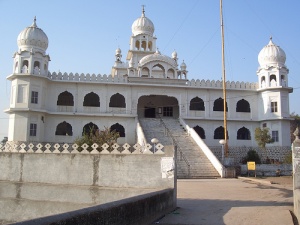 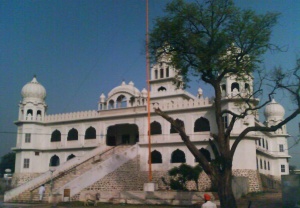 Gurdwara Charan Kamal is a Gurdwara in Kiratpur Sahib which is situated on a mound overlooking the canal from Nangal barrage. It commemorates Guru Nanak Dev’s meeting with a Muslim saint, Pir Buddan Shah, during his fourth round of world tours called Udasis.

Pir Buddan Shah was a great noble Muslim saint who was a resident of the area of Kiratpur before the township was established. The Janamsakhis mention that on a black hill on Kehloor Mountain, there lived Pir Buddhan Shah, who had some goats. One day Guru Nanak visited him and discussed spiritual matters with the Pir.

The Pir offered the Guru some milk. The Guru drank some and left the rest saying that the remaining milk would be drank by a Sikh named Gurditta. The Gurdwara honours the visit of Guru Nanak in the 16th century to this locality.