From SikhiWiki
(Redirected from Wali Kandhari)
Jump to navigationJump to search 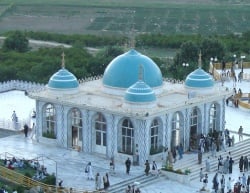 Shrine of Baba Wali in Kandahar
photo by Ghousuddin Frotan

Baba Wali Kandhari was a Sufi saint or pir who is believed to have been born in about 1476 in Kandahar in Afghanistan. In about 1498 he moved to Hasan Abdal near present-day Rawalpindi in Pakistan. This town is about fifty kilometres from Rawalpindi to the west side of the mountains. A very hilly area, in some places natural fountains or springs flow from the ground.

On a nearby hill, at an altitude of 714 meters, Wali Kandhari settled and built a small house near a natural fountain. The water here was very clear and so the town people used to come to fetch drinking water from this fountain. There was no other source of fresh drinking water nearby. The water from the fountain then progressed down the hill to the small town. Kandhari would preach to the simple people who came there. Soon he had enlarged his house into a small community building or "dera".

The meeting with Guru Nanak 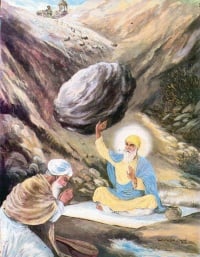 But as time progressed, he became arrogant and began to discriminate against those who had not accepted Islam. He used this dera to assist people who followed his faith and to punish the "non-believers". After travelling through Arabia and many other countries, in 1521 A.D during the summer season, Guru Nanak reached this town and set-up camp near the base of the foothill where the Wali had commandeered the only spring.

When he saw people gathering around Guru Nanak instead of coming to his place, he became very angry. So, he stopped the spring water from flowing down to the town. The people became frustrated. How could they and their cattle live without water! A group of them went to Baba Wali Qandhari. They begged him to let the water flow down as before.

But Baba Wali Qandhari said angrily, "Go to your Guru, the one you visit everyday now and ask him for water." The people went to the Guru and told him the whole story. The Guru said, "Don't lose your heart. Trust in God. He will not let you die of thirst". The Guru then said to Bhai Mardana, "Go and appeal to Bawa Wali Qandhari and request him to let the water flow down to the town." Bhai Mardana went to Wali several times as instructed by the Guru but he could not win the heart of the pir.

Each time Mardana return and narrated the story to the Guru. The Guru said, "Don't lose your heart. God is great and merciful. He can make springs flow from wherever He likes. Let us all pray to Him." They all prayed. Then Guru Nanak Dev lifted a stone. At once, a stream of cool, clean water began to flow from the place where the Guru lifted the stone. Read this sakhi in more details at Guru Nanak at Hassan Abdal. 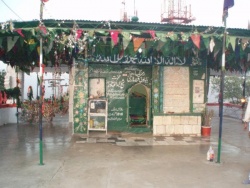 Now there is a meditation chamber related to this 15th century Muslim saint, Baba Wali Qandhari, also known as Baba Hasan Abdal at the top of the hill leading from the Gurdwara Panja Sahib. Many devotees make the trip from the Gurdwara to the hill top shrine to also pay homage to this Sufi saint. The saint stayed in Hasan Abdal from 1498 but died in about 1529 and is buried in village Baba Wali near Qandhar (Afghanistan). The devotees and visitors climb over the steps leading to the hill, to make an offerings and also to get a panoramic view of Hasan Abdal.

The shrine of Baba Wali, its terraces shaded by pomegranate groves beside the Arghandab River, is also very popular for picnics and afternoon outings.

Sitting on the banks of the Arghandab River is the Baba Wali Shrine, also known as Baba Sahib by Kandaharis. Gul Agha Sherzai, the twice-former Governor of Kandahar, fierce warlord and former Mujahideen commander constructed the shrine at a cost of millions of dollars to honour one of his revered tribesmen.

It provides a great view to the verdant Arghandab Valley, which is in stark contrast to the rest of the dusty province. The multi-level shrine, marble and mirror-clad, set into a hillside is a popular picnic place for the Kandaharis, with kebabs, hand made ice cream and local fruit juices available from cart vendors.