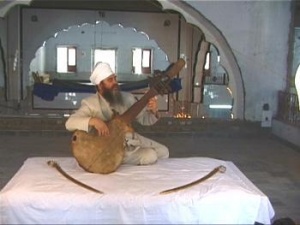 In the Sikh tradition of sangeet (music) there are three main type of performers of kirtanias. These are: Rababis, Ragis and Dhadhis

The three types of Sikh musicians - rababis, ragis, and dhadhis continued to flourish during the period of the Gurus. Guru Nanak started the rababi tradition by engaging Bhai Mardana as his accompanist-musician. Formerly the Muslim singers were called mirasis, but Guru Nanak gave them a new name - rababis, because they played on the rabab (rebec) and adopted the Sikh way of life in food, dress and manners. Some of the notable rababis after Mardana were his son Shahjada. Balwand and Satta, Babak - son of Satta, Chatra - the son of Babak, and Saddu and Baddu - the rababis used to perform kirtan regularly at Amritsar before the Partition in 1947. The last of the line of rababis was Bhai Chand whose kirtan the author had the privilege of listening to, before 1947. After the Partition of India, the rababis migrated to Pakistan, the line of rababis is almost dying out without Sikh patronage.

The second type of musicians-ragis were the amateur singers whom Guru Arjan encouraged to perform kirtan in order to avoid dependence on professional rababis. Some of the bards (bhatts) at the Court of Guru Arjan, whose compositions are included in the Scripture, became ragis and did kirtan before the congregations at different centres. Early in the eighteenth century, Bhai Jassa Singh Ahluwalia - the great warrior-performed kirtan at Mata Sundri’s residence at Delhi, after the passing away of Guru Gobind Singh. Kirtan at the Golden Temple, Amritsar, was discontinued (on account of the persecution and atrocities of Muslim rulers) for many years in the eighteenth century. When the Sikh missals (confederacies) obtained control of Amritsar, kirtan was restarted at the Golden Temple. Bhai Mansa Singh ragi performed kirtan at the Golden Temple during the regime of Maharaja Ranjit Singh. Bhai Sham Singh Adanshabi did kirtan at the Golden Temple for more than seventy years. Outside Amritsar, Sant Attar Singh, Bhai Sujan Singh, Bhai Randhir Singh and his groups proved to be devoted kirtaniyas who did commendable missionary work.

The ragi group generally consists of three persons: one plays the tabla or jori (pair of drums) and he seldom participates in the singing; the other plays the harmonium, and the third plays a stringed instrument or harmonium or cymbals. The leader of the group sits in the centre and the group is known by his name. Even today, ragi-groups are employed by the Shromani Gurdwara Parbandhak Committee to perform kirtan in relays at the Golden Temple and at some historic Gurdwaras in the Punjab. Some of the travelling ragi-parties continue to perform kirtan in different parts of the world where there is a concentration of Sikh residents. Some groups of American Sikhs are particularly devoted to kirtan and sing hymns every morning in their Ashrams or in the local Gurdwara on holidays.

Guru Hargobind first employed the third types of musicians called dhadhis early in the seventeenth century. He instructed them to sing heroic ballads (vaars) in his court to inspire the Sikhs at acts of valour and heroism. Bhai Abdulla - expert in playing the Sarangi, and Bhai Natha - player of dhadh (a small hand-drum) were quite popular. The clash with the tyrannical Muslim rulers appeared imminent. The dhadhi-groups performed before the sangat and groups of Sikh soldiers. These groups subsequently became very popular all over the Punjab on account of the use of folk tunes and their zealous and emotional style of singing. These folk singers had hardly any knowledge of Hindustani classical music, but their appeal to the masses was irresistible. A dhadhi group consists of two or three singers, one playing on the sarangi, another playing on the dhadh, and the third may be their leader, discoursing on the contents of their songs. Though they are expected to sing vars of the Scripture, they usually sing their own poetic compositions on the daring exploits of Sikh warriors and martyrs. One of the famous dhadhi-jathass was that of Bhai Kishen Singh Kartor. Sohan Singh Seetal is also a well-known dhadhi.