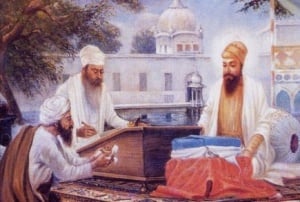 The word Sukhmani is rendered into English as “consoler of the mind.” The entire poem has been translated into English more than once under the commonly preferred title, "Jewel of peace", “Psalm of peace” or “Song of peace”, signifying the soothing effect it has on the mind of the reader. Sukh literally means peace or comfort and mani means mind or heart also jewel ( ਮਣੀ in Gurmukhi can mean jewel, gem, precious stone

The Sukhmani opens with a manglacharan or invocation to the Supreme Being. In this four-line salok, the Supreme Being is remembered as adi gure (Primal Preceptor), jugadi gure (Preceptor from the beginning of time existing), sati gure (the Truth Preceptor) and sri gurdeve (Preceptor Divine). The following six astpadis dwell on the advantages of remembrance, in a spirit of love, devotion and surrender, of the Holy Name which results in linking up one’s consciousness with the divine. This brings bliss, peace and approval at the Divine Court.

Name Divine is man’s true helper and friend, the true conferrer of joy and bliss as against the trust in yogic austerities, ascetic practices and ritual worship which are of no avail in liberating him from the cycle of birth and death. Ineffective in the same way are intellectual feats and membership of religious orders. Remembrance of the Divine Name is the most exalted of all religious practices and the purest of all ritual actions. Ungrateful to God and indifferent to devotion, humanity is in bondage to lust, wrath, avarice, attachment and pride — the five evils. Forgetful of God, man remains attached to maya which is compared to rejecting a jewel and chasing a cowrie. Man is warned of those drawbacks and is exhorted constantly to meditate on the Divine Name which becomes possible only when he overcomes his ego and cultivates humility which, in turn, is attained only through the Lord’s grace.

Astpadis seven to eleven deal with the concept of perfect man, and ideal man, a man of God. He is jivanmukta, i.e. one who has become liberated while still living in the mortal body. Such a person is detached from grief and joy. To him gold and dust, amrit (nectar) and poison, pauper and prince, worldly honour and dishonour are alike. The company of the holy — sadh sangat — which confers on the disciple manifold spiritual benefits is a necessary prerequisite to achieving this ideal, though access to this association is also dependent upon Divine grace. People so sanctified have a wisdom even greater than that imparted by the Vedas and live beyond the triguna, i.e. the three attributes of maya. Remembrance of God’s Name in the company of these saintly people is preferable to all rituals and creeds.

These verses also endorse access of all humanity, irrespective of colour, caste and creed, to divine knowledge, and to emancipation through meditation on His Name. Anyone who, with the Divine favour, keeps the company of the holy and repeats the Name becomes God-enlightened, the Brahm-giani. He is free from all dubiety and worldly entanglements, and his mind is always at peace. In the spirit of the God-enlightened may be beheld God who is otherwise nirankar, the formless Supreme Being. God’s hukam is the sole source of the vast and variegated creation. Far from being indifferent to the infinitude of creation, He responds to the love of the devout who are the crown of His creation. Such persons are always blessed with joy and spontaneous bliss and they transcend the pleasures and passions of this material world.

Astpadis twelve to twenty stress the significance of sadhna, or discipline, for the spiritual progress of man. Self-conceit and slander against the saints are deadly sins which must be totally avoided. The one who slanders the saints is considered to be the worst evil-doer, bereft of all spiritual blessing. He perishes, writhing like a fish out of water; hopeless and unfulfilled, he leaves the world.

However, this kind of evil-doing is traced to the consequences of deeds in a previous birth. This endless cycle of coming and going can be broken only with the help of the Divine Preceptor who is like a lamp in the darkness, a guide in the pathless forest. His word helps man as a pillar supports an edifice. Like a boat carrying a stone across the water, he enables his disciple to pass over the worldly ocean and end the torments of transmigration. However, such a Preceptor one meets only by God’s grace. The eradication of pride and inculcation of humility are two other stepping-stones which lead to the Divine portal. Pride in such things as royal authority, beauty, ritual acts, austere practices, wealth and estates is condemned. Besides being humble and contented, one must repose life’s hope solely in God. Man is exhorted to recite the glory of God which will bring him true blessing.

The last four astpadis, i.e. from twenty-one to twenty-four, contain an exposition of God’s absolute powers. He is the sole creator of this world and none can fathom His greatness. He is the creator of, but free from, triguna maya and is infinite and eternal. There was utter emptiness before the creation which is the result of His Will. Here the monist aspect of the Lord as the Sole Existence is emphasized. He is the Supreme comforter, compassionate, controller of the inner faculties and cherisher of all. He is without rancour and it is through His hukam and grace that man acquires true wisdom. The path to this ideal is shown by the Preceptor, who applies the collyrium of enlightenment by banishing the darkness of ignorance. By such enlightenment, man seeks company of the saintly and sees the Lord within himself and in all the external creation as well. God abides within all yet remains unattached. The last astpadi sums up the teachings of the earlier cantos. The one who wants to find God is exhorted to dwell on the Divine Name, as taught by the Guru, in the company of the saints which alone will help him shed ego and inculcate humility. Thus will he discard worldly desire and cross the ocean of fire (i.e. of sin and suffering).