The Sukhmani sahib is probably the greatest single composition of the fifth Sikh Guru, Guru Arjan. This Gurbani in raga Gauri Sukhmani in the Guru Granth Sahib is a lengthy composition which spans a total of 35 pages from page 262 to page 296 of the sacred Granth (holy Book) of the Sikhs. Its lyrical beauty apart, Sukhmani is a profoundly significant scriptural text for all devotees of the Sikh faith and indeed for all of humanity.

The composition is written in fairly simple Punjabi for a formal religious text and most native readers will be able to understand it to a large extent; a few passages are a little challenging but these have many valuable translations in various languages. Further the verses are divided into neat small coherent packages which are a delight for the reader. the reader is able to clearly savour the love of the writer and the love expressed by the fifth Guru. 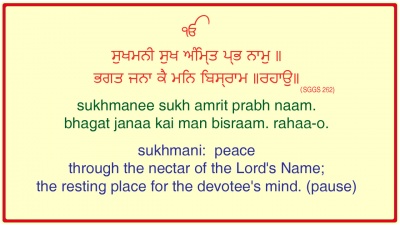 "Jewel of bliss," a spiritual delight

It is said that the Guru wrote it in response to request from a devotee who was suffering from physical pain and mental anguish; unsurprisingly, the devotional recital of Sukhmani restored him to good health and a calm and peaceful state of mind. The word 'Sukhmani' means the "psalm of equipoise" (balanced state) or "jewel of bliss". This holy bani (hymn) is a treasure of the rarest kind and will bring pure happiness and true bliss for whoever recites it with dedication.

This unique prayer which, not only can be read just as any other bani but can also be sung with music accompaniment has only one focus - to bring "Sukh" or peace to the person’s mind. In whatever form it is recited, it will bring everlasting peace, calmness and comfort to the mind. Its sound is tranquillising and soothing and removes stress from the mind; it opens your heart to live in gratitude, steadies your spiritual discipline, and connects you with your inner strength, endurance, courage and the infinite consciousness to overcome every obstacle.

It is a long prayer which can take a skilled Gurmukhi reader about 90 minutes to read the whole of the bani. However, many devotees read the bani in several sittings to start with and as their fluency and familiarity with the words increases, they can slowly complete the whole of the “paath” in one go. It is said by many that listening to or reciting Sukhmani Sahib once a day can change your destiny from misery to prosperity and give you inner balance, grace, radiance, energy and the power to sacrifice.

The Sukhmani Sahib has structural unity. It has 24 staves (Saloks), one of which begins each canto. The number 24 may symbolically represent each hour of the day. There are 24 cantos, each containing 8 stanzas. Each stanza has ten lines that is, five couplets per stanza. There is also the unity of theme: the perfection of man’s mentally, morally and spiritually. The stave of each canto gives the gist of the 8 stanzas that follow it.

In the Indian time system, the day is divided into 8 "kharee" literally "clock" meaning a 3 hour time sector and the hour is also divided into 8 sections of 7.5 minutes each. So the day has 4 parts and the night has 4 parts.

The following are videos of the text of Sukhmani sahib in original Gurmukhi with transliteration and translation in English.

Please watch both videos - read and listen to the words and also read and understand the meaning of this Gurbani.

Snippets from this bani

The Guru tells us in the first Ashtapadi (stanza) that by meditating on God, one finds peace and your worries and anguishes will disappear. The Guru repeats the word "simar" three times. Only by doing simran (meditating on God) can one obtain real Sukh (peace).

What is ‘Sukh’ (peace)?: We mistakenly accept worldly comforts as ‘peace’. We think that if we collect wealth then we will get peace; lots of money will give us peace; if we make houses we will get peace; if we get a new car, we will obtain peace. We try all this and soon we realise that money does not bring peace or happiness. Then we think that our friends and relationships will bring us peace; if I have lots of friends, I will get happy and joyous. We try this but no long lasting peace is attained.

If you are a man, you think if I get into a relationship with a woman then I will get peace and real happiness; if we procreate sons we will get peace... We try all these options .... by having lots of friends, a big family and a flourishing business does not bring us happiness or peace of mind. Can anyone say that they got peace from all this? The true and honest answer is - No. By doing all these things; by collecting wealth; by making lots of friends; by having a large family; by running a successful business... one does not get long lasting peace. Peace and happiness will only come when you walk on the path of the Lord; when you listen to your inner Guru and tread on the road to the True Lord.

This verse and the following verses of the second stanza of the first canto tells us in plain, simple and easy to understand language what one achieves by meditating on the Lord and on his message of truth. The many the fruits of Naam Simran are listed.

In this section the Guru begins with the statement that by meditating on the Lord, one does not enter the womb again. The highest level of sorrow of life is the continuous cycle of birth and death. Our soul has been involved in this cycle or re-incarnation for a infinite length of time; we don't know how many times we have been through the pain of birth and death but the Guru tells us that we may have to go through 8,400,000 life forms ("84 lakh juns"). Naam Simran is the only way which can take us out of the cycle of life and death. |- |

The rest of the second stanza lists all the other fruits of doing simran ... death is eliminated; ... one's enemies are repelled; ... no obstacles are found; ...one remains awake and aware, night and day; ....one is not touched by fear; ...one does not suffer sorrow; and the Guru ends with ...The meditative remembrance of God, in the Company of the Holy, brings all treasures just by instilling in ourselves the Love of the Lord.

In the remembrance of God...
.... are wealth, miraculous spiritual powers and the nine treasures.
.... are knowledge, meditation and the essence of wisdom.
.... are chanting, intense meditation and devotional worship.
.... duality is removed.
.... are purifying baths at sacred shrines of pilgrimage.
.... one attains honor in the Court of the Lord.
.... one becomes good.
.... one flowers in fruition.
They alone remember Him in meditation, whom He inspires to meditate. Nanak grasps the feet of those humble beings. ||3||

The remembrance of God is the highest and most exalted of all.
In the remembrance of God ....
.... many are saved.
.... thirst is quenched.
.... all things are known.
.... there is no fear of death.
.... hopes are fulfilled.
.... the filth of the mind is removed.
The Ambrosial Naam, the Name of the Lord, is absorbed into the heart. God abides upon the tongues of His Saints. Nanak is the servant of the slave of His slaves. ||4||

Those who remember God: ..are wealthy; ..are honorable; ..are approved; ..are the most distinguished people; ..are not lacking in anyway; ..are the rulers of all; ..dwell in peace; ..are immortal and eternal. They alone hold to the remembrance of Him, unto whom He Himself shows His Mercy. Nanak begs for the dust of their feet. ||5||

Those who remember God: .. generously help others; .. to them, I am forever a sacrifice; .. their faces are beautiful; .. abide in peace; .. conquer their souls; .. have a pure and spotless lifestyle; .. experience all sorts of joys; .. abide near the Lord. By the Grace of the Saints, one remains awake and aware, night and day. O Nanak, this meditative remembrance comes only by perfect destiny. ||6||

Remembering God, ... one's works are accomplished; .. one never grieves; .. one speaks the Glorious Praises of the Lord; .. one is absorbed into the state of intuitive ease; .. one attains the unchanging position; .. the heart-lotus blossoms forth; .. the unstruck melody vibrates. The peace of the meditative remembrance of God has no end or limitation. They alone remember Him, upon whom God bestows His Grace. Nanak seeks the Sanctuary of those humble beings. ||7||

Remembering the Lord, ... His devotees are famous and radiant; .. the Vedas were composed; .. we become Siddhas, celibates and givers; .. the lowly become known in all four directions.

For the remembrance of the Lord, the whole world was established. Remember, remember in meditation the Lord, the Creator, the Cause of causes.

By His Grace, He Himself bestows understanding. O Nanak, the Gurmukh attains the remembrance of the Lord. ||8||1||

Law minister of Pakistan Syed Afzal Haider, a descendant of Baba Farid, has transliterated Sukhmani Sahib in five scripts, including those in Persian, Roman, Shahmukhi and Gurmukhi.

Sukhmani Sahib is the name given to the set of hymns divided into 24 sections appearing in Guru Granth Sahib.

President of the American Gurdwara Parbandhak Committee (AGPC) Pritpal Singh told The Tribune about the scriptures after a meeting with caretaker Prime Minister of Pakistan Mohammedmian Soomro at his office in Islamabad. He said it was the sole efforts of Haider to complete this gigantic task, which had been praised by the Sikhs currently on a pilgrimage in Pakistan in connection with the birth anniversary of Guru Nanak Dev.

Meanwhile, the AGPC chief said Soomro assured the Sikh delegation, comprising Manmohan Singh, Avtar Singh Sanghera, Amrik Singh Vochhoa, Kuldip Singh Chaheru and Harbhajan Singh Matharoo, that his government would make efforts to open a visa centre in Lahore. However, Soomro asked the Sikh delegates to take up with the Indian government the issue of opening a visa centre in Amritsar. 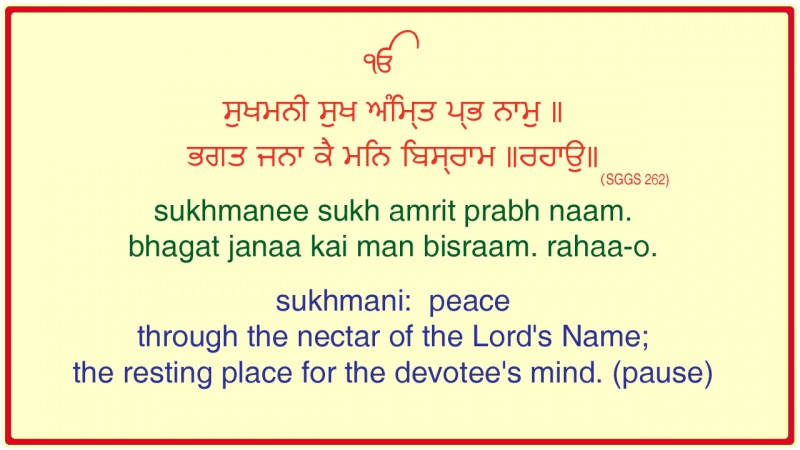