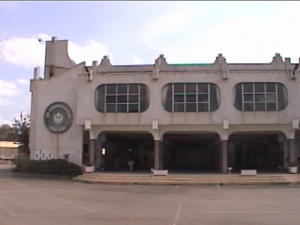 Nairobi /naɪˈroʊbi/ is the capital and largest city of Kenya. The city and its surrounding area also form the Nairobi County. The name "Nairobi" comes from the Maasai phrase Enkare Nyrobi, which translates to "cold water". The phrase is also the Maasai name of the Nairobi river, which in turn lent its name to the city. However, it is popularly known as the "Green City in the Sun" and is surrounded by several expanding villa suburbs. Inhabitants of Nairobi are called Nairobians. Founded by the British in 1899 as a simple rail depot on the railway linking Mombasa to Uganda, the town quickly grew to become the capital of British East Africa in 1907, and eventually the capital of the newly independent Kenyan republic in 1963. During Kenya's colonial period, the city became a centre for the colony's coffee, tea and sisal industry. Nairobi city is also a county in itself. The city lies on the Nairobi River, in the south of the country and has an elevation of 1795 m above sea-level.

Sikhs have been migrating to East Africa since 1890's. They established themselves as a very hard working, honest, religious and skilled community reaching the site on which Nairobi now stands along with the then Uganda Railway, i.e. about the year 1896. They came in considerable strength, forming part of the railway construction labour force recruited from India for specific periods. These Sikh workmen were in the main hereditary car­penters, masons and blacksmiths. With the exigencies of the local demands however, many of them readily adapted themselves to other skills, such as fitters, turners, boiler-makers, mechanics, engine drivers etc. Practically all of them were illiterate. They were of course, with­out their families in the initial phase.

The Juja Road branch of Siri Gurudwara Bazaar was started in 1962 consisting of Main prayer Hall, Langar, Guru Nanak Nursery School and Secondary School and dispensary. The foundation stone of the new building at Juja Road was laid by Sardar Gurmeet Singh Kandola of M/s. Kishan Singh & Sons Nakuru in 1987.

The building was completed in 1989, with the dining Hall on the ground floor and the prayers Hall on top, which can accommodate 1000 worshippers. The official opening ceremony of Guru Darbar was performed by Sardarni Amar Kaur, mother of Sardar Pakhar of Kakamega in July 1989.