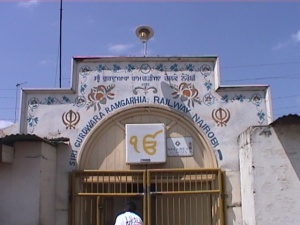 This is the oldest Sikh Temples in Nairobi which was built by the Sikh employees of Kenya Railways in 1903. The site on Factory Street, was allocated by Railway Authorities. The construction was done voluntarily by these employees during their free time. The Gurudwara which consisted of single hall had walls and roof made of corrugated iron sheets. As the number of employees increased it became necessary to expand the Gurudwara. This was done by building stone walls around the verandah which surrounded the walls of corrugated sheets. These sheets were then removed. In the course of expansion a kitchen and some residential facilities were constructed.

Sikh Temple Landia was the first Gurdwara established in Nairobi, Kenya in 1903. The Gurdwara is built in the vicinty of the main train station in Nairobi. It was built by the pioneering Sikhs who had worked on the East-African Railway Line during Kenya's colonization by the British. At that time the entire area around the Gurdwara was occupied by Sikh rail workers and their families. As times changed the Sikhs moved to other parts of the growing city but the Gurdwara Sahib remained. As the Sikh community grew in Nairobi, the Gurdwaras location and space prompted the community to build a new Gurdwara which today is known as Gurdwara Ramgharia South C, Nairobi. Landia Gurdwara was still there but divans were only held once a week and on Punia di raat.

Recently in 2002/2003 the Gurdwara was told to shut down by the Railway commision since it was built on their land. They're primary reason for asking the Sikh community to shut down the Gurdwara was its limited use. In simple terms, the railway commission asked the Sikhs to use the Gurdwara more frequently or shut it down so they could develop the land. Amazingly, in a city where 6 other massive Gurdwara's had already been established, the community came together to save the first Gurdwara in the country. The community in order to have more frequent use of the Gurdwara planned 101 Akhand Paths to celebrate the 100th anniversary of the Gurdwara Sahib. With Guru Ji's kirpa even after the 101 Akhand Paths finished, continous Akhand Paths have been going on to this day and more are planned. The Sikh community of Kenya has saved the Gurdwara from shutting down ensuring a bright future for the Gurdwara Sahib and preserving the roots of Sikhs in Kenya. - article by Jasmeet Singh Bansal User: Bansalj

Sikh Temple Landia is now pin pointed to its exact location on the Gurdwara's Map application. Check it out here - Gurdwaras East Africa