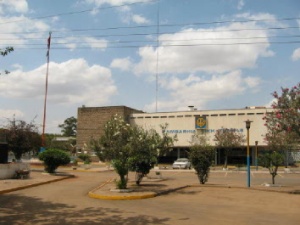 The present Ramgarhias are indebted to the pioneers, skilled artisans and technicians working on the Kenya Uganda Railways in the early nineteen’s. The Yatta Road Ramgarhia Hall came into existence when Sardar Hem Singh Sehmi laid the foundation stone in the year 1933. The construction of the hall was done in harambee spirit by members of the community who worked tirelessly in the evenings, on week ends and on holidays. After four years of toiling Seva the opening ceremony was performed on 26th March 1937 by Sardar Kehar Singh Kalsi. The Ramgarhia Hall consisted of a prayer hall with a balcony, where on one side Sahib Siri Guru Granth Sahib was enthroned on a fourposter bed and the other three sides of the balcony could accommodate limited Saadh Sangat. The remaining Saadh Sangat could comfortably be seated in the main hall. The kitchen adjacent to the hall as a split level was designed to cater for communal meals. Residential rooms, dining hall and guest wing were a part of this three storey building.

As the community increased in number with the lapse of time a need for a larger premises was felt and in 1946 a plot was acquired. On this plot Ramgarhia Mansion consisting of three storeys with shops, dispensary, dental clinic and flats was built. In mid 1960 a very modern Social Hall was constructed next to Ramgarhia mansion to meet further requirements of the community.

The construction of the Ramgarhia Sikh Temple at its present Pangani site was started by Sod cutting ceremony on 15th March 1970 by Sardar Hardial Singh Bhachu. The foundation stone of this prestigious complex was laid by was laid 29th November 1970 by Tara Singh Chana and Avtar Singh Channa. The official opening ceremony was performed by Sardar Gurdial Singh Sian on 30th April 1972.

This complex consists of a double storey edifice in the centre with the Social Hall (Dashmesh Hall) on the ground floor and the congregation hall (Nanak Darbar) on the first floor. The office block, residential flats for Gianis, old committee room and another hall called Jassa Singh Hall are situated adjacent to Nanak Darbar. On the 2nd floor additional administrative offices and a spacious committee room were built for conferences and meetings.

The ground floor of this complex compromises fully equipped large kitchen, ration store, dining area, dish washing area, crockery stores, open courtyard and large tarmac parking area for over 250 cars. Within this complex, a double storey Ramgarhia Youth Centre was built in 1984/1985 to cater for the welfare of the youths.

The Temple accommodates and operates a library with a wide selection of informative books, magazines, literature, video and audio tapes on religious and social subjects.

Recently, after the magnificent Vaisakhi 300 celebrations in 1999, a commemorative monument and fountain was opened adjacent to the Nishan Sahib of the Gurdwara Sahib.

Sikh Temple Pangani is now pin pointed to its exact location on the Gurdwara's Map application. Check it out here - Gurdwaras East Africa