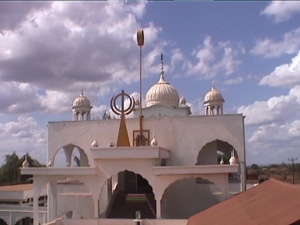 Today, all types of people visit this Gurdwara everyday and it is a 'must-see' Gurdwara for any Sikh or any other spiritually aware person travelling to Kenya and East Africa. It provides a peaceful atmosphere where one can meditate and calm ones mind before proceeding to join the "rat-race" again. The Gurdwara complex is very large and has facilities for langar around the clock and living accommodation for travellers.

The name Makindu is borrowed from the palms that grow along the crystal clear streams from the volcanic hills of the nearby Chyulu’s and Kilimanjaro. But the fame of this tiny roadside town, on the Nairobi - Mombasa Highway, has spread amongst the Sikhs worldwide - and yet its story started so simply in the 1920s.

In the News/Other articles

The open temple of Makindu 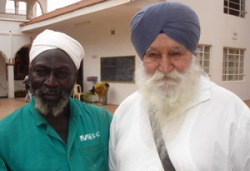 In the dusty plains of Makindu, a rural outpost along Nairobi-Mombasa highway, stands a landmark that has shaped the history of an otherwise forlorn and obscure settlement.

Located about 170km from Nairobi, Makindu Sikh Temple is a conflation of historical and religious events that date back 100 years.

And it is because of the temple that many know Makindu as a pilgrims’ sojourn.

The temple’s mast, a trademark for all Sikh temples worldwide, stands out from a far. Draped in yellow cloth, the 151ft mast can be spotted by motorists on the highway from a distance.

Makindu Temple is revered by the Sikhs world over. Amristar Golden Temple — the shrine on the border of India and Pakistan — is the holiest.

The temple is half bedecked with pure gold. Just like Amristar, there is a mystical ambience about Makindu Gurdwara (temple in Punjabi). About 10 priests, spotting white kaftans, run the temple. They move in rhythmic motion and maintain a studious silence only broken when they are consulting workers, who are about 60.

The presence of two peacocks parading their majestic feathers adds a mystical denouement to the Gurdwara. It is only in this temple that priests carry kirpan, the Sikh sword. Ideally, the kirpan should be carried by all Sikhs, a people considered to have a warrior heritage.

Mr Man Mohan Singh, 65, is the longest-serving priest at the temple, having arrived there in 1974.

"Makindu holds a special place in the spiritual world of the Sikhs. We believe Guru Gobind Singh Ji resides in Makindu and that is why Sikhs from all over the world come to seek his indulgence, guidance, wisdom and offer prayer requests," says Mohan.

When The Standard on Saturday visited the temple, Mr Boaz Oyoyo, 60, welcomed the team.

Oyoyo is from Vihiga District and has worked in the temple since 1979. Over time, he acquired the name Black Kalasinga (the black Sikh). He spots a white turban and keeps a greying beard.

"When I first came to work at the temple, all these buildings were not there. We used to eat there (points at a Malindi palm tree) because that is where the kitchen was. Today, the dining hall and the kitchen have capacity for more than 100 people a sitting," he explains.

He speaks Punjabi fluently and can recite Sikh prayers like a master. Yet, it is his mastery of Kikamba and Sikh culture that has set him aside.

"The Kalasingas (Kiswahili for Sikhs) have been good to me. In the many years I have worked with them, we have forged a lasting friendship and a deeper understanding of each other," he says.

Although his long stay in Makindu has made him sort of a celebrity in the area, he still travels to his rural home in Vihiga.

He is currently overseeing the construction of a prayer hall, which will be spruced up by a water fountain. Also under construction are cottages for invalids and old pilgrims. A one-stop lift to ferry the pilgrims to the upper shrine will also be built.

From a makeshift structure that was the temple in the early years of its existence, it now has more than 200 hotel-class rooms that host guests for free.

And one does not have to be an adherent of Sikhism to stay at the temple. From local and foreign tourists to children on a school trip, all are welcome.

"The Sikh encourage travellers to stop by to relax, eat and enjoy the serenity and if they are too tired, they can sleep the night over," says Oyoyo.

The temple can host up to 4,000 people. "When we have such a large number, it is the very old and children who sleep in the rooms. Others sleep in their cars or pitch tent in the compound," he says. Mr Augustino Mwange, the chief chef, has worked at the temple for the past 10 years and has become a Sikh cuisine expert. "There are travellers who stop by at midnight, and when they come to the dining hall, they will always find something hot," says Mwange, who hails from Machakos.

When The Standard on Saturday met Kosgey, who was on his way to Taita Hills, he was accompanied by his nine-year-old son. "It is a tradition that runs through my family and I want my son also to experience and keep it."

Mr Amin Premji, 52, has also kept the tradition. "The philosophy of Makindu Temple is that all races come together to experience the sanctity of humanity in a holy sanctuary. Over time, that is what I have learnt from my coming here".

Yet others come to the temple for thanksgiving after a milestone in their life. For instance, Harjeet Singh Manku is at the temple because his daughter’s wedding has been a success. "When I arrive at Makindu, I experience sublime peace and calmness," he says.

Mr Vic Tyson, a tourist from Vancouver, Canada, says a visit to Kenya would be incomplete without stopping by the temple.

Across the road, the management has put up a hospital to serve locals. "The hospital charges Sh50 for any treatment, but we have never chased anybody away due to lack of money," says Dr David Kimani, an ophthalmologist at the hospital.

Among personalities who would never miss a chance to pass by the temple was founding President Jomo Kenyatta, says Makindu Temple Committee chairman Mohinder Singh Vohra.