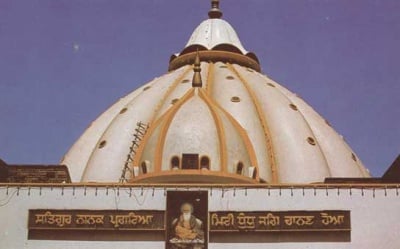 The main aim of the Singh Sabha was to restore the purity of the Sikh culture, to do away with non-Sikh practices and inculcate love for Sikhism. It also encouraged publications of books and periodicals on Sikh history and prompted the Punjabi language as a medium of teaching.

In addition they also tried to influence prominent Englishmen and sought their support for educational programmes and other matters. It must also be remembered that the British had much respect for the Sikhs, for their character, bravery on the battlefield and the religious traditions they followed. So much so, that they encouraged Sikhs to join the army and expected them to wear their five Ks. Anyone trimming his beard was thrown out of the army. 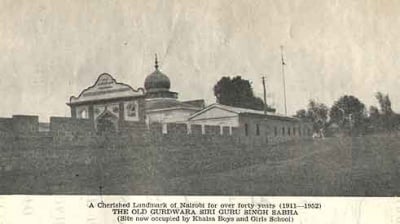 The foundation stone of the Gurdwara was laid by Sardar Kishen Singh in the year 1909. The building took more than a year to complete and the opening ceremony was performed by Baba Bishen Singh in 1911. There were only about one hundred Sikhs in Nairobi in those days, but what a magnificent Gurdwara did they build! The main hall was 36ft. long by 32ft. broad with a ten feet wide verandah all around it. About ten rooms were also built to cater for the traveler’s and the granthi (priest). The interior of the Gurdwara was artistically decorated. There was a massive entrance gate surmounted by a lion sculpture in stone. The glory of the Gurdwara was a huge bronze central dome which for many years was a landmark and showpiece in Nairobi. The opening was a day of rejoicing and the Sikhs traveled from Mombasa, Nakuru, Kisumu and other towns for this historic occasion.

In September 1956, a deputation approached the Government for grant of a piece of Crown Land at Byramjee Street, later renamed Uyoma Street. The application succeeded and plans were started around this time. 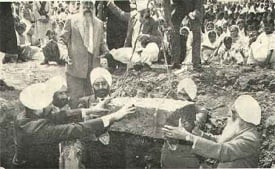 Laying of the foundation stone of Sri Guru Singh Sabha, Nairobi (circa 1959)[2]

When the first plans of the new Gurdwara were discussed, the historical Golden Temple at Amritsar was very much in mind of the management. The element on the tradition was strong and compromise solution was found by the Architect Mr. Vamos. The present Dome was designed to reduce echo. The advice of the structural Engineers Messrs. Gilbert A. Dean & Partners for structural safety was accepted. 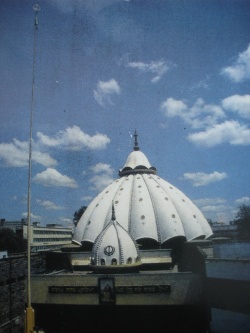 The construction took five years and this was not plain sailing for the people concerned with construction. Unfortunatley, Mr. Gilbert Dean died in May, 1959. Capitol Construction Company started the works in 1960 and Messrs. Bansal Brothers Limited completed the works. Sardar Santa Singh, the Road Contractor tarmacked the open space inside the Gurdwara.

The building was completed in 1963 and officially opened by Sardar Inder Singh Gill on November 1963. The flag of the ‘Panth’ was hoisted by Sardar Jodh Singh, retired Chief Inspector of Police. The Gurdwara Sahib opened days before Kenya gained its independence from the British on December 12, 1963.

Siri Guru Singh Sabha has right through held its weekly diwans on Sundays, Istri Sabha, the ladies wing on Racecourse Road on Fridays and Istri Sabha, South ‘C’ on Thursday’s. The Istri Sabha’s always been stout pillars of the Sabha. They have always assisted in the organisation of Guru Ka Langar.

Improvements to the Gurdwara

Since 1982 further improvements have been carried out on the Temple buildings and facilities enhanced. The tiling of the domes was done under the supervision of Sardar Tarlochan Singh Sagoo. The terrazzo paving of the court yard was laid by Sardar Phuman Singh Sahota. Apart from improving the aesthetic look of the complex, the domes have been rendered waterproof and the flooring comfortable.

The installation of the extractor fans in the kitchen and the extensions to the utility area adjoining it have greatly effected the working conditions in the kitchen complex. The construction and erection of the Nishan Sahib (flag staff) by late Sardar Perminder Singh Sagoo, Chairman of Siri Guru Singh Sabha, has greatly given an uplift to the image of the temple.

Messrs. Khusal Singh Laundry Limited have always provided the services of cleaning sheets and carpets. Various other people have rendered free and voluntary services to the community. 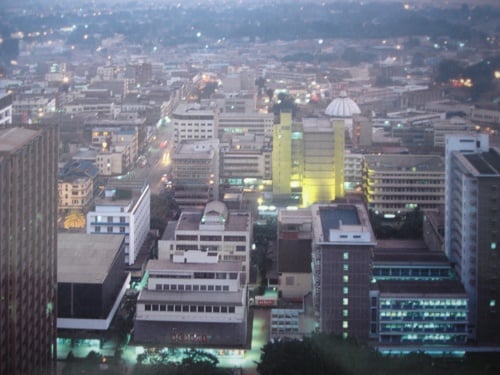 The 80ft Dome of Siri Guru Singh Sabha majestically standing out in the contemporary skyline of Nairobi City. (circa 1998)

Sri Guru Singh Sabha is now pin pointed to its exact location on the Gurdwara's Map application. It is easy to spot the 80ft white dome in hussle and bussle of Nairobi city. Check it out here - Gurdwaras East Africa