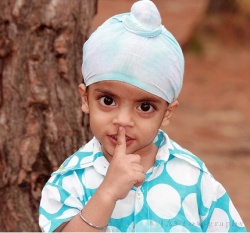 The Sikh Guru tells us very clearly that speaking lies is wrong and will lead the person away from God; he or she will not find peace or solace and the result will only be continuous misery and sadness. The motivation of telling lies is greed; the person speaking lies has some gain at the back of their mind; it may just be done for a laugh but whatever the motivation, the Guru says that greed is the spark that leads one to lie. The Guru says, "What can anyone do, with greed within? O Siblings of Destiny, by telling lies, they eat poison.(4)" (SGGS p 635) The greed within results in the person succumbing to the temptation to lie and satisfy this inner need.

The Guru compares the telling of lies to the "...eating of poison". This is repeated many times. On page 948 of the holy Granth, the Guru tells us "Speaking lies, one eats poison; the self-willed manmukh departs, crying out in pain" (SGGS p 948). Again "speaking lies one eats poison" is repeated. According to Gurbani, telling lies is just like taking poison - it leads to a slow killing of the inner spirit - the person moves away from purity and from the God within; also when you do final depart, you will go away crying - not a very pretty prospect for the future.

The dictionary says that to tell a lie is to purposely say something that is not true because you want to make the other people believe it; it is an attempt to deceive or mislead someone normally for a personal gain of some sort, however small.

A lie (also called prevarication, falsehood) is a type of deception in the form of an untruthful statement, especially with the intention to deceive others, often with the further intention to maintain a secret or reputation, protect someone's feelings or to avoid a punishment or repercussion for one's actions. To lie is to state something that one knows to be false or that one does not honestly believe to be true with the intention that a person will take it for the truth. A liar is a person who is lying, who has previously lied, or who tends by nature to lie repeatedly - even when not necessary.

Lying is typically used to refer to deceptions in oral or written communication. Other forms of deception, such as disguises or forgeries, are generally not considered lies, but their influence, according to Gurbani, is the same as the underlying intent and is in general the same as a lie. However, even a true statement can be used to deceive. In this situation, it is the intent of being overall untruthful rather than the truthfulness of any individual statement that is considered the lie.

What Gurbani tells us

When is a lie not a lie?

A lie is not a lie when one:

1. Does not disclose everything - that is only gives the briefest of answer which is still true and
2. There is No personal gain as a consequence of the statement made.

With ID (identity) theft being the fastest growing crime in the West, telling the truth and giving away your personal information to random people may not be the most sensible way to run your life. So where does one stand here. Should we lie to these random people and tell the truth to others; or should we just plain lie here. In which case where do we draw the line? Who is random and who is not; who is there to steal your ID and who is not?

So there is a little more to the definition of a lie? Is there such a thing as a white lie?

During the time of the tenth Guru, Guru Gobind Singh there were only small number of Sikhs left surviving due to the constant persecution by the Mughals. To bolster the image of the Sikhs and to provide a boost to the Sikh moral, the Guru put forward the concept of one Sikh being able to fight 125,000 others. Accordingly, when the Sikhs communicated numbers of their soldiers going from one place to another, they would, for example use a figure of 625,000 when only 5 Sikh soldiers were travelling; if this message was intercepted, it would give an inflated size of the Sikh army to the Mughals. Was this a white lie? The short answer is NO, but it is up to the reader to come to their own conclusion.

Pray for a chance to make it right

I lied to the people that meant the most to me in this world. My mother and the person that I am in love with. I told one person one thing and the other person something totally different. Everyday I had to think about every word that came out of my mouth because I told a lie to cover up for a lie to cover up for another lie.

My mother still holds me at arms length. My love I don’t know. I will never be looked at the same way again. It’s hard knowing that something so small could destroy everything.

I lied because I didn’t have enough faith in the people around me loving me for who I am and not what I am and what I have. Now I don’t have anything. I have material things but I’ve lost my loved ones trust. That can make you feel hollow at times.

Pain is progress. I can now look at what I’ve done and never do it again.

PRAY FOR A CHANCE TO MAKE IT RIGHT!!!!

Be honest and be strong

I admit i’m a liar, I honestly think I’ve been this way for a long time too, but it’s going to stop.

I lie about stupid, petty things and for no reason, it’s beyond ridiculous.

I have plenty of things that I want to change about myself this year but this is the first one, I think that if I continue to lie to myself and others, my friends and family are not going to trust me and eventually I won’t even trust myself.

I need to remind myself: If you want to implement change in your life the first thing you need to be is HONEST, to yourself first. To be honest about the fact you have a problem and to be HONEST about what it will take to change.

I promise myself to make this a year that counts in shaping who I am; to be honest and to be strong.