The 'family' is the basic 'atomic' structure and essential social unit in Sikhism; it is the common unit which collectively forms communities. The family is the strong and noble Sikh core institution which has been promoted since the time of Guru Nanak. It was this social unit which was most important for all the Sikh Gurus who preached the 'life of a house-holder' rather than the 'life of renunciation' which was prevalent in other cultures of the time. All the Sikh Gurus were members of the 'family unit'; all adult Sikh Gurus were married while the eighth Sikh Guru, Guru Harkrishan was a 'bala' or "child Guru".

The Gurus believed that the family unit through procreation ensures the continuation and existence of healthy societies; without the 'family unit' there is risk to the future of secure societies. In addition, the family has economic and educational functions to perform; so when family life runs in a smooth and happy manner, it creates a strong engine where societies and communities can prosper and flourish in a safe and secure environment. A strong 'family unit system' ensures a successful biological, economical and spiritual future of human societies!

Sikhism recommends an active life in which family has a great role to play. Life of a householder is the best institution to fulfil the Sikh ideal of contributing to the development of human society. Guru Nanak, the founder of Sikhism stressed the importance of the "way of the householder" as the ideal pattern of life for the seeker of liberation, rejecting the ascetic alternative. He himself lead a family life, was married and went onto have children and an extended family who performed very well the tasks expected of them in society.

All his successors upheld the same ideal of normal family life, expressing it in their own lives as well as in their teachings. The third Guru, Amar Das (1479–1574) proclaimed: "Family life is superior to ascetic life in sectarian garb because it is from householders that ascetics meet their needs by begging" (AG, p. 586). To understand the family relationships, caste and gender issues need to be addressed from the Sikh perspective.

Importance of family in society 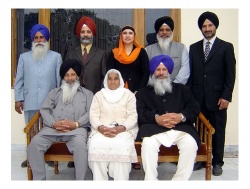 Mother with her 6 sons and 1 daughter

The family in Sikhism is a training school for social, cultural, political and spiritual makeup. It is a training school for Seva and charity. From the family of birth, the religious and ethnic ideas are implanted in the child. It is worth it to mention here that Bhai Mani Singh ji took his traits from his forefathers. Guru Arjun Dev ji implanted the spirit of sacrifice in the wider family by offering his life to uphold righteousness.

Sikhs believe in monogamy. Marriages are normally arranged by the parents with consent of the children. Pre marital sexual relationships are not condoned in Sikhi and sex with anyone other than ones marriage partner is forbidden as well. Discipline and righteousness are the cornerstones of Sikh principles. The family unit living in a loving environment is regards in Sikhi as the right place to raise and educate children in the higher values of human life as taught by the Sikh Gurus.

Marriage is channel to Liberation

Marriage, called Anand Karaj in Sikhi is considered to be a sacrament. Anand Karaj (Punjabi: ਅਨੰਦ ਕਾਰਜ, anand kĝraj) is the name given to the Sikh wedding ceremony, literally translated as "Blissful Event or Occasion". Sikhs regard marriage as a sacred bond of mutual dependence between a man and a woman. A true partnership in marriage is made between those who are united in spirit as well as in mind and body. Marriage is regarded as a strong bond between the bride and groom and the relatives of both families - it is accepted as a joining of the two families into one as well.

According to the concept of Lavan (name of the marriage hymns in Sikhism), divorce is not allowed under normal circumstances in Sikhism. It is expected of the couple to help and support each other in the family to attain a comprehensive understanding of the Almighty Waheguru through their union, responsible attitude and mutual support.

According to Sikhism, the concept of family values is the only way to attain prosperity and world peace. Family values in the broadened sense are needed to save a suffering world which is living under pain and frustration.

Each family member is expected to play their role in the family to help nurture and flourish the family; mothers are traditionally given an important role in the bring up of the young within the family. After the Sikh mother gives birth to a child, she with the other female members play a dominate role in the bringing up of the child for the first few years. Duties and chores are shared in an equal manner so as to make sure that the family's work load both physical and mental are spread evenly.

The father is the number two in this situation and will share in all the background needs of the child and mother (wife) while the child is young; he is required to share in all the chores so as to make sure the mother can provide all the front line services to the baby. The father and other adults (grand parents, etc) will also provide support to the mother in the early days of the baby's life and also as and when required by the mother.

Soon after both mother and child are fit, the first religious ceremony is held for the baby. The Child Naming or Naam Karan Ceremony usually takes place in a Gurdwara after the baby and mother are medically and physically fit to attend the Gurdwara. There is no limit or threshold to this timing and the family should not feel undue pressure of any kind as to the timing. The only matters that need to be taken into account is the well being of the mother and child.

On the day of this happy occasion, the family should with all invited guests, the mother and baby go to attend the normal weekly [[]]kirtan gathering of the Saadh Sangat, the holy congregation. The family should make arrangements to have Karah Prasad made for the occasion. Various Shabads of thanks, joy and support should be sung in the congregation followed by the short Anand Sahib (6 pauris). Then if a Sahaj Paath has been arranged, the Bhog of this reading should take place.

Shared and Even work load

Khalsa (baptised Sikh) parents respect the hair of the child and always keep it intact. It is the duty and responsibility of every Sikh mother and father to have their child educated and raised with a reasonable knowledge of Sikhism. Both parents play a role in teaching the child about the values and principles that have been established by the Sikh Gurus.

Traditionally, it has been the role of the Sikh father to "go to work" and earn a living by physical or mental skills - this function called Kirit Karni is now, due to the economic need and necessity performed by both parents. Both parents have to have skills to be employed in some way "to make a living" so that the family can be catered for. All members of the family have to undertake a daily routine of Nitnem (reciting of Gurbani) which will depend on their ability and convenience. Adults are expected to recite the Five Banis starting with the Japji sahib.

The child also has a duty and responsibility to play a useful and meaningful role in the family. As the child grows up, more and more will be done by the child for the family. This is the pattern established by the Sikh Gurus.