The Udasis of Guru Nanak 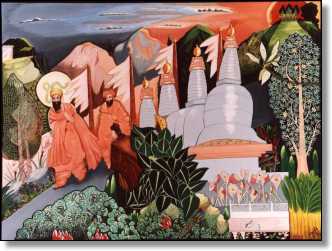 Guru Nanak was moved by the plight of the people of world and wanted to tell them about the "real message of God". The peoples of the world were confused by the conflicting message given by priests, pundits, qazis, mullahs, etc. He was determined to bring his message to the masses; so in 1499, he decided to set out on his sacred mission to spread the holy message of peace and compassion to all of mankind.

Guru Nanak saw the world suffering out of hatred, fanaticism, falsehood and hypocrisy. The world had sunk in wickedness and sin. So he decided that he had to travel and educate and press home the message of Almighty Lord. So he set out in 1499 on his mission for the regeneration of humanity on this earth. He carried the torch of truth, heavenly love, peace and joy for mankind. For 1 year he spread his message of peace, compassion, righteousness and truth to the people in and around his home.

Then in 1500, he embarked on his Divine Mission and went towards east, west, north and south and visited various centers of Hindus, Muslims, Buddhists, Jainis, Sufis, Yogis and Sidhas. He met people of different religions, tribes, cultures and races. He travelled on foot with his Muslim companion named Bhai Mardana, a minstrel. His travels are called Udasis. In his first Udasi (travel), Guru Nanak covered east of India and returned home after spending about 6 years. He started from Sultanpur in 1500 and went to his village Talwandi to meet and inform his parents about his long journey. His parents wanted their young son to provide comfort and protection for them in their old age and so they told him they would prefer it if he did not go. But he told them that the world was burning in the fire of Kalyug and that thousands and thousands were waiting for the Divine message of the Almighty for comfort, love and salvation. The Guru, therefore, told his parents, "There is a call from Heaven, I must go whither He directs me to go." Upon hearing these words, his parents agreed and gave their blessings. So Guru Nanak started his mission and the roots of Sikhism were laid down first towards the east of India. 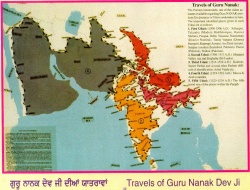 Below is a brief summary of the confirmed places where Guru Nanak visited:

To spread his gospel, Gur Nanak ji traveled widely throughout Asia . To this end he undertook four Udasis (Tours). The first udasi (1500-1505) was to the central and eastern parts of India. Second udasi (1506-1509) took him to important towns and religious centers of south India, including Sri Lanka. During the third Udasi (1514-1516) Guru Nanak traveled to the Gangetic plains, Bihar, Nepal, Lahsa, Leh, as far as Tashkand and then back to Punjab via the Kashmir valley. The fourth Udasi (1518-1521) took him to various Arab countries. 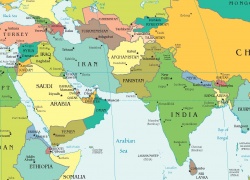 "A significant factor in the survival of the Hindu religion in Sindh during the Muslim period, in reasonably good shape, was the rise of the Sikh religion in the Punjab. With Sanatan Dharma having gone, more or less, moribund under prolonged Muslim rule, Sikhism came as a fresh breeze in the stale Sindhi atmosphere. The fact that the two provinces were neighbours, their people, kin and their languages allied, made Sikhism tick very well in Sindh.

It is believed that Guru Nanak Dev visited Shikarpur in his wide-ranging travels. One Kanayalal of Sindh joined Guru Govind Singh, who made it his duty to serve water to the wounded on the battle-field. Kanayalal gave water not only to the Hindu wounded but also to thc Muslim wounded. Some Sikhs thought it wrong to revive enemy soldiers. They took Kanayalal to the Guru, who appre- ciated his action and asked him to go and preach Sikh Dharma in Sindh. He came to be known as ``Khat Waro Bao (Khaat wala Bawa) because he gave his sermon while sitting on a cot."

2) Janam Sakhi or The Biography of Guru Nanak, Founder of The Sikh Religion