From SikhiWiki
(Redirected from Sain)
Jump to navigationJump to search

Bhagat Sain was an Indian saint and was influenced by the Bhagti Movement. He was one of the 12 main disciples of Bhagat Ramanand Ji. Bhagat Sain Ji promoted Ram Naam (The name of God) and promoted the idea of abolishing the caste system. He was a barber at the court of King Raja Ram of Rewa, then called Bandhavgarh.

In Guru Granth Sahib Ji, his hymn is included and kept aside with the Gurus’ bani, which means that he was a great and blessed soul and believed in one god. That is why he was recoginzed by the Sikh Gurus. His Janamsakhi is called Sri Sain Granth.

Bhagar Sain was born in vill. Sohal Thati(Amritsar) in Samat 1400. His father name was Mukand Rai and Mothers Name was Mata Jivni. Mata Jivni got the son like Bhagat sain after blessing of a Faqir Guriya who came to their home for food. Sain means Sayian, a person which is born for God(Sayin).

Bhagat Sain was not interested in study so his father sent him to Aunt Sobhi at Lahore. He learnt work of Barber at lahore from Ustad Azeem(Barber). Their he got married with Sahib devi and returned home. He had a son name was Baba Nayi.

The tendency of the age was towards devotion and religious composition, and Sain found leisure in the midst of duties to study the hymns of Ramanand, shape his life on the principles inculcated in them, and successfully imitate their spirit and devotional fervour.

Bhai Gurdas View
According to Bhai Gurdas, Sain is a disciple of Ramanand:
Hearing of the glory of Kabir, Sain also turned to become a disciple [of Ramanand].
At night he would be busy with acts of loving devotion, and by day he would visit the door of the king.
One night, some sadhus arrived as guests and the night was spend on discussions and contemplation on the Lord's name.
Sain found he could not part with the sadhus and so he failed to reach the door of the king.
God, took the form of Sain reached there and upon serving the king made him happy.
Bidding farewell to the sadhus, Sain nervously rushed off to the king's door.
From a distance, the king called to Sain, and discarding his robes offered them to Sain to wear.
"You have empowered me" spoke the king, who's words were heard by all.
The Almighty manifests the glory and greatness of this devotee.
Bhai Gurdas Ji, Vaar 10, Verse 16

Other sources from Sri Sain Temple, Batala also says so that Bhagat Ramanand was Guru of Bhagat Sain. who guided him the true way to lord. 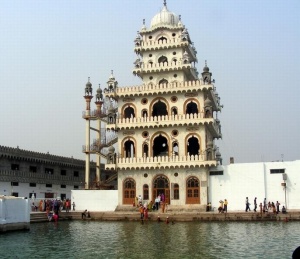 Once there was draught in punjab area so Bhagat Sain ji came to Delhi with His family to Diwan Sohan lal. From there he was send to serve a king who was suffering from disease.

The accomplishments and duties of an Indian court barber at the time of Sain were and are still of a miscellaneous character. He is something of a surgeon and ordinarily a marriage or match-maker, he oils the king’s body, shampoos his limbs, pares his nails, shaves his face and head, if he be a Hindu, and clips his moustaches, if he be a Musalman; amuses him with gossip and tales; often plays the rebeck and sings his own compositions, which deftly combine flattery of his master with social satire or pleasentry.

God is said by the Hindu chronicler to have cherished Sian as a cow her calf. He frequented the society of holy men and was very happy in their company. He performed for them all menial officies, for he believed that serving saints was equivalent to serving God himself.

There is a legend which at once illustrates Satgur Sain Maharaj Ji's devotion to saints and the estimation in which he was held for his piety. When going one day to perform his usual ministrations for King Raja Ram, he met some holy men on the way. He thought it was his first duty to attend to them, He took them with him, and began to render them with the customary services. With the greatest mental satisfaction to himself he gave them consecrated and secular food to relieve their souls and bodies. In thus acting Satgur Sain Maharaj Ji disregarded his duty to the king and braved his displeasure.

The legend states that a holy man, by God’s favour, in order to avert the king’s wrath and save Bhagat Sain Maharaj Ji from punishment, assumed his appearance, and having gone and performed the customary duties for the king, took his departure. Soon after Sain arrived and began to apologise for the delay. The king said, “Thou hast only just gone after the usual services to me; why apologise?” Sain replied, “ I have not been here. Perhaps thy majesty sayest so to excuse my absence.” The Raja then knew that a special providence had intervened and performed for him the usual tonsorial duties. He was at once converted, fell at Sain’s feet, worshipped him as his guru, and thus sought an asylum in God. It had at any rate at the time of the composition of the Bhagat Mal become an established custom that the successive kings of the house of Bandhavgarh should always be disciples of the descendants of Bhagat Sain Maharaj Ji. They are now said to be followers of Bhagat Kabir Maharaj Ji.

Bhagat Sain have any disciples from low caste to upper caste. One of famous disciple was Brahmin Kordass. Bhagat Sain gave him namdan and explained the true way of life. He contributed well in ending the false systems like Caste system, untouchibility

During last days of his life he spend with his friends Dhanna, sadhna,pipa. During his end time he called his son Bhagat nai to kashi and tell him to stay here for last time, to which he replied that he could not stay their for life time as he is worldly person. Bhagat Sain died in Samat 1490 at Kashi. Bhai Nai lived in Kashi for a year and returned to Punjab. 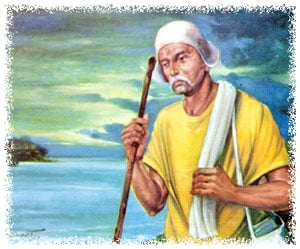 Bhagat Sain's bani can be found in the following ANG (page) of Guru Granth Sahib: