From SikhiWiki
(Redirected from Ramanand)
Jump to navigationJump to search

Bhagat Ramanand(Adi Granth: ਰਾਮਾਨੰਦ ਜੀ), also known as Swami Ramanand, was a Gurmukh, Poet, Saint, and Devotee, whose bani is present in the Adi Granth Sahib, the Holy book of Sikhs, now known as the Sri Guru Granth Saahib Ji. [2] He is popularly known as Vaishnav Saint and is considered as the reviver of the Bairagi Sect (popularly Ramanandi Sect[3]). He was born to an upper-caste Brahmin family, around the mid 14th Century, and preached that Hari (God) was available to people of all castes, which reflected in the teachings of the bhagats following him: Bhagat Dhanna Ji, Bhagat Kabir Ji, and other Bhagats.

In the hymn, Bhagat Ramanand tells his spiritual state.

ੴ ਸਤਿਗੁਰ ਪ੍ਰਸਾਦਿ ॥
One Universal Creator God. By The Grace Of The True Guru:

The above shabad is against some facts which are here under: 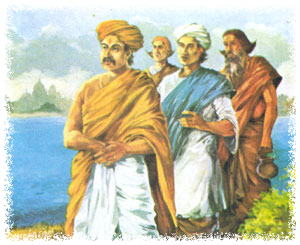 He was spiritually inclined from his early childhood.

There is not much written about Ramanand literary contribution since some of bullet points are: