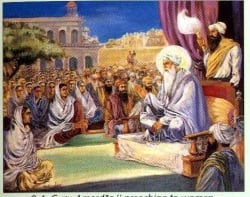 Purdah is a discriminatory system of dress use which was prevalent in India and other surrounding countries where the women had to cover their face (and the rest of their bodies) from men by using a veil or other clothing. The women were forced to wear a veil or "Burkah" whenever there was a likelihood of meeting a man.

The Sikh Gurus preached and banned this custom and Sikhs are strictly prohibited from practising this custom. Guru Nanak, the founder of the Sikh religion instructed all devotees to only approach him without "Purdah" or veil. When the Raja (king) of Haripur came to see Guru Amar Das, the Guru insisted that the king first partake a common meal from the community kitchen, called langar, irrespective of his caste and high social status. The Raja obliged and had an audience with the Guru.

However, one of his queens refused to lift the veil from her face, so Guru Amar Das refused to meet her and asked her to remove the veil. Guru Amar Das not only preached the equality of people irrespective of their caste and race but he also foster the ideal of equality of women. He preached the liberation of women from the practices of purdah (wearing a veil) as well as preaching strongly against the practice of sati (Hindu wife burning on her husband's funeral pyre). Guru Amar Das also disapproved of a widow remaining unmarried for the rest of her life. 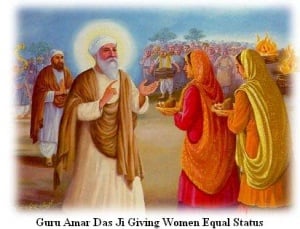 Women who had many equal privileges with the menfolk in Vedic India were reduced to a position of utter subordination before the time of the Mughals. In the codes and institutes laid down in the dharmasastras (holy shrines) they were given the status of sudras (the low caste). They were declared to be intrinsically impure and unfit, hence ineligible, even for listening to the recital of sacred texts and receiving religious instruction or initiation. The inherent attraction of the female was considered to be a temptation to sin, and man had to remain on guard all the time. Woman was maya, illusion; “nature had designed her for the enjoyment of man” and she had “no other function than to serve him.”

With the Muslims came purdah, the veil, and zananah, confinement of womenfolk to the interior apartments. The female became a greater liability for the male of the invaded populace who, weakened economically, had not only to feed his female dependants but also to be ready to protect their honour and chastity in those troubled times. This, among other causes, social as well as cultural, led to the practice of female infanticide, as also of child marriage. The state of a widow was the most pitiable. Polygamy was permissible for man, but a woman could not remarry even after the death of her husband. The smrtis enjoined upon the widow to practise sahamarana, lit. simultaneous death, commonly known as sati, by burning herself on the funeral pyre of her husband. Where concession was made and the widow allowed to live on, being pregnant or having infant children, for instance, she remained ostracized from society, submitting herself to rigorous discipline of self-denial.

With the advent of Sikhism appeared a liberating force in Indian society. Affirmation of the dignity of the human being, male as well as female, was central to Guru Nanak’s teaching. His mystical vision of the immanence of the Creator in all of His creation was concretized in a forceful enunciation of the gospel of equality. Guru Nanak said that all creatures were equal before God and that to make distinctions among them on the grounds of birth or sex was sinful. For women especially, he had many bold and sympathetic words to say. Quoted most often in this respect are verses from Asa ki Var, a long composition sung in sangat in the morning service.

“Of woman are we born, of woman conceived; to woman engaged, to woman married. Women are befriended, by woman is the civilization continued. When woman dies, woman is sought for. It is by woman that the entire social order is maintained. Then why call her evil of whom are great men born?”