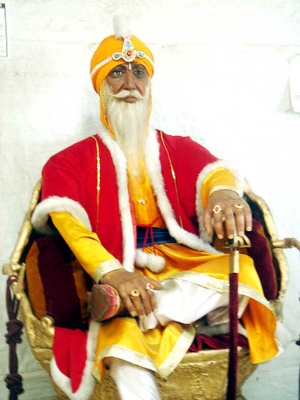 The early years of the 19th century witnessed the power of the Durrani declining. Maharaja Ranjit Singh was encroaching the Afghan Kingdom and the Maharaja was eager to avail himself of any opportunity to snatch the rich province from the Durranis, the rulers of Afghanistan.

An opportunity came to Maharaja Ranjit Singh, when he annexed Attock in 1813 from the Afghans. But his initial attempts of 1814 and 1815 to seize Kashmir failed miserably. But then another opportunity arrived in 1819 when a Kashmiri Pandit, Birbal Dhar, a revenue collector of the Valley under the Afghans, escaped first to Jammu and then to Lahore and urged the Sikh ruler to free the Kashmiris from Afghan oppression.

Sikh forces under the command of Missar Diwan Chand, properly guided by Birbal Dhar and Mian Gulab Singh, invaded the Valley in 1819. Jabbar Khan the acting Governor of Kashmir collected his troops and faced the Sikh army but he failed to stop the onslaught of the Sikh forces. After Khan's defeat, his remaining forces returned to Srinagar, where in the darkness of night, the Afghan Governor and his forces left Kashmir by the Baramulla Muzaffarabad route heading for Kabul. After their victory, the Sikh forces under the command of Missar Devan Chand and Phula Singh Akali halted at Shopian.

On 15 July, 1819, the victorious Sikh army entered Srinagar. The commanders of the victorious army were personally ordered by the Sikh ruler that they should take special care for the safety and the security of the inhabitants of Kashmir and also see that no harm or injury be made to any individual.

Contrary to the victorious forces of the previous rulers the Sikh forces on entering the city of Srinagar did not harm any civilian, spoil their honour nor loot the property of the wealthy shopkeepers. This was a new experience for the Kashmiris, as previously their property was looted and their honour despoiled on every occasion at the hand of the invading Afghan forces.

The conquest of Kashmir was a significant addition to the Sikh kingdom because of the strategic position of the Kashmir valley which could give protection to the kingdom of Punjab from the North. It was also the richest province second only to Multan. Maharaja Ranjit Singh desired to visit the Kashmir valley but could not enjoy the beauties of the charming Valley because he remained too busy overseeing the administration of his rapidly expanding kingdom.

However, in 1822 he visited Purmandal and Jammu even making lavish offerings at Purmandal to the Hindu temples and persons connected with their up-keep. He also took a holy bath at Purmandal. In Jammu he donated money to the keepers of the most beautiful garden in Jammu, the Garden of Muglani Begum. He also visited a Thakurdwara in Mubarak Mandi, the palaces of the Dogra rulers, a Dharamshalla in Panjtirthi and a Muslim Fakir named Ali Shah. His respect and his generous offerings to the Hindu and Muslim people and their sacred places, settled the minds and worries of the local people who had long suffered under previous invading armies.

The Maharaja ruled Kashmir through his Nazims (Governors) and revenue farmers, however many of the Governors (whose tenure of office was about two years) were either recalled for mal-administration or for non fulfilment of their engagements.

Maharaja Ranjit Singh was secular and liberal in his political and religious affairs. “His visits to the shrines of Muslims, saints and Hindu temples were as much acts of faith as those to Harminder Sahib or to Taran Taran”. He not only paid visits to those shrines but also he gave liberal donations and assigned Jagirs for their maintenance and to support free kitchens.

This was his policy which enabled each community to observe their religious practices with freedom, but there were exceptions when he acted contrary to his liberal and secular attitude because of political compulsions. To make his subjects happy, he and the members of the royal family used to take part alike in Hindu, Muslim and Sikh religious festivals.

It is said that the Maharaja, on a few occasions, was even present at Id-ul-Fitr and during Muharram. In this way, he gained the goodwill of his subjects and their support on important occasions, especially when he had to launch campaigns against contemporary rulers of other faiths. As such, all the communities looked upon him not only as their well wisher and protector but as one of themselves.

Another reason for the great popularity he enjoyed, was that after conquering new territories he didn't replace the vanquished rulers, whether Hindus, Muslims or Sikhs, with the disgrace; dishonor; and public contempt that other conquering rulers had exhibited, rather the Maharaja granted them Jagirs and considerable provisions for their maintenance.

The public welfare and secular attitude of Maharaja Ranjit Singh towards his subjects, irrespective of caste and creed, resulted in a communal harmony among all the various religious communities.

The Maharaja, perceiving his death was near, donated many pieces of Gold and many lakhs of coins among his subjects and his Kingdom's institutions. As a Sikh most of the Hindu rites connected with an approaching death were not performed for the Maharaja, but his hair, however, was washed with curd and water from the Ganga. Being a devout and true Sikh, his last desire was to donate the world famous Koh-i-Noor diamond, the Maharaja had worn on his left arm in a golden band, to the temple of Lord Jagannath (or the Jawalamukhi Temple in the valley of Beas, to which his son, Sikh Raja Kharak Singh donated a beautiful folding door of silver plates), but his desire was not fulfilled due to his sudden departure from this world. Raja Dhian Singh his Prime Minister, himself a Hindu, opposed this lavish gift to the Hindu Temple. (The diamond was worn by each of the Maharaja's sons, during their sucessive rule, before being siezed by the British and taken to London, where it is now mounted in the Queen Mum's crown.)

Maharaja Ranjit Singh's religious policy towards his subjects, his treatment towards vanished Rajas and rulers, his compassion for the poor, for widows and needy persons and his encouragement and support to education and teaching indicates that, inspite of his being an autocratic ruler, his policies towards his subjects were, never the less, foresighted and ahead of his time and in keeping with the tenets set by the Sikh Gurus.

One should be cautious when comparing his liberal and secular policies towards his subjects with the conditions of the people which preceded the establishment of his rule over Punjab and Kashmir with those which prevailed during his rule.