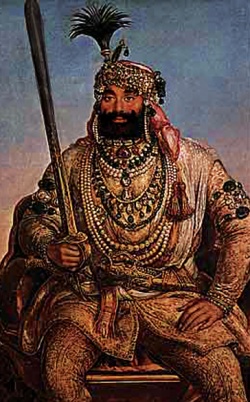 Portrait of Sher Singh Seated on his father's Golden Gaddi, which is still on display in London

Maharaja Sher Singh (4 December 1807 - 15 September 1843), was the Sikh sovereign of Punjab from January 1841 until his assassination in September 1843. He was the son of Maharaja Ranjit Singh, born on 4 December 1807 to Mahitab Kaur, Maharaja's first wife. Sher Singh grew up to be a handsome, broad-chested young man given to fashionable dress and lavish jewellery. His soldierly mien made him popular with the army. He loved hunting and hawking, and devoted attention to cultivating European interests and hobbies in the company of foreigners serving at the Sikh court.

In 1829, Maharaja Ranjit Singh conferred upon him civil and military honours and the privilege of being seated on a chair in his Darbar. Sher Singh took part in many of the campaigns undertaken by the Maharaja for the expansion of his kingdom. In May 1831 he defeated, at Balakot in Hazara district, the turbulent Sayyid Ahmad Barelavi who had started a jihad against Sikh rule. From 1831 to 1834 he acted as governor of the province of Kashmir. In 1834 he was one of the army commanders who led forces in Peshawar and who finally seized the city from the Afghans.

Stakes his claim to the throne

In the political vacuum created by the successive deaths in November 1840 of Maharaja Kharak Singh and his son Kanvar Nau Nihal Singh, Sher Singh staked his claim to the throne of the Punjab. Another major contestant was Rani Chand Kaur, Kharak Singh's widow, who sent for Gulab Singh Dogra from Jammu to counteract the influence of his brother, Raja Dhian Singh, who had declared support for Sher Singh. Dhian Singh suggested several compromises. Chand Kaur could marry Sher Singh or, being childless could adopt Sher Singh's son Pratap Singh as her son. However, Chand Kaur asserted that Nau Nihal Singh's widow was pregnant and might give birth to a rightful successor.

Ultimately an arrangement was arrived at under which Chand Kaur was to act as regent for her expected grandson, while Sher Singh would function as vice-regent and head of the council of regency, and Dhian Singh as the principal minister. But the triumvirate failed to work in unison. A few days later, two powerful Sandhanvalia Sardars, Atar Singh and Ajit Singh, collaterals of the royal contenders for the throne, arrived in Lahore and took over control. On 2 December 1840, Chand Kaur was proclaimed the Maharani of the Punjab, with the title of Malika Muqaddasa (immaculate queen). The next day Sher Singh left Lahore for his estate in Batala. A month later, Dhian Singh Dogra was compelled to quit the capital, and Chand Kaur and the Sadhanvalias gained complete control of the administration.

Sher Singh still had the support of the army and most of the crack regiments had gone over to his side. The European officers were with him too. In January, 1841, he arrived in Lahore at the head of a considerable force. Chand Kaur had appointed Gulab Singh Dogra as commander-in-chief and charged him with defending the city. She cleared the soldiers arrears of pay for four months, and lavished presents of gold bangles, necklaces and shawls on the officers. She issued orders to the city bankers forbidding them to lend money to Sher singh. But the situation turned decisively in favour of Sher Singh, when regiments stationed outside the city-walls joined him in a body. He finally had with him 26,000 infantry, 8,000 horses, and 45 guns, whereas Chand Kaur was left with only 5,000 men, a few guns and a limited quantity of gunpowder.

Sher Singh forced his way into the city, and made a proclamation assuring safety of life and property to the citizens and offering pardon to those who would come over to him. The leading courtiers made their submission and forwarded a joint appeal to Chand Kaur and Gulab Singh Dogra to lay down arms. The Maharani, however chose to fight. For two days, Sher Singh's artillery shelled the fort, but with little effect. On the evening of 17 January 1841, Dhian Singh Dogra arrived and secured a ceasefire. Chand Kaur was persuaded to accept a jagir and relinquish her claim to the throne. At midnight Gulab Singh Dogra and his soldiers evacuated the Fort, taking with them all the State's hoard of gold and jewels. From among the Sandhanvalia supporters of Chand Kaur, Ajit Singh fled to seek help from Mr. Cler, British political agent in Ludhiana, and, on his refusal to receive him, he proceeded to calcutta to see the Governor-General. Ajit Singh's uncle, Atar Singh, also sought asylum in the British territory.

Sher Singh ascended to the throne

Sher Singh occupied the fort and ascended the throne on 20 January 1841, though the formal tilak (anointment) ceremony was performed a week later on 27 January by Baba Bikrama Singh Bedi of Una. His son Kanvar Pratap Singh, received a Khillat as heir apparent and Dhian Singh Dogra was appointed as Wazir (minister). In the second half of July, Sher Sigh married the daughter of the Raja of Suket. Known in the palace as Rani Dukno, she was famed as one of the most beautiful women of her time. The match was made on the recommendation of Lahina Singh Majithia woh conducted the preparatory negotiations.

Sher Singh forbore from taking any reprisals and treated generously even those who had opposed him. Through a proclamation by the beat of drum, he assured the people of Lahore peace and security. The army was warned not to molest the citizens in any manner, and the commanders were cautioned to exercise maximum vigilance to this end. But since the Maharaja was not able to redeem his promises of rewards to the troops (as Gulab Singh Dogra had stolen and carried away the state treasury to Jammu), they went berserk, killing regimental accountants and officers, who they suspected of having embezzled their wages or of having dealings with the English, and plundering the city.

As the prestige of the Darbar declined, the men of the army began to have their voice heard in matter of state. The one institution with which they were familiar was the Panchayat, the council of elders which regulated the affairs in their villages. The system was imported into the army, and each regiment began to elect its own panches whose duty was to deliberate on the orders of the commanding officer and then to make their recommendations to the men. This seriously affected discipline in the army.

The British engaged in Afganistan

The British from across the border might have intervened in the affairs of Maharaja Sher Singh's administration, but they were prevented from doing so by a sudden turn of events in Afghanistan which the British had occupied earlier with the active help of the Sikhs under the Tripartite Treaty of 1938, placing Shah Shuja on the throne of Kabul. In a bloody rising in Kabul in the autumn of 1841,

Shah Shuja was murdered and the British army of occupation was annihilated, only one man of the thousand+ made it out of Afghanistan. For the recovery of Afghanistan, Lord Ellenborough, the governor-general, sought (spring 1842) the cooperation of the Sikhs. Reassured that the Sandhanvalia refugees in the British territory would not be allowed to disturb his reign, Sher Singh was persuaded to assist.

The purchase of grain and hire of carriage and cattle in the Punjab were facilitated, and a division of 5,000 Sikhs helped force the Khyber pass. Sher Singh allowed Dost Mohammad Khan, with whom the Sikhs crossed swords in many battle and whom the British were escorting to Kabul for the installation as the new king. The Lahore Darbar signed a separate treaty with Dost Muhammad Khan as the Amir of Afghanistan.

A notable event during Sher Singh's reign was the conquest of the Ladakh valley which was strategically very important and which made the frontier secure against the expanding influence of China. A Sikh expedition under the Dogra General Zorawar Singh, marched towards Tibet. Garo and Rudok wre occupied and Lhasa armies attacked. Although the expedition did not make much headway owing to premature snowfall and difficult and unfamiliar terrain, a treaty of peace was signed on 17 September 1842 between the representative of the Khalsa darbar and the representative of the Chinese emperor. It was agreed that the traditional boundaries of Ladakh and Tibet would be considered inviolable by both parties and that trade, particularly of tea and Pashmina wool would, as in the past, travel through Ladakh.

In March 1842, Mr Clerk of the Ludhiana political agency had led a diplomatic mission to Amritsar to condole with Maharaja Sher Singh on the death of his predecessor and congratulate him upon his accession. He also took the opportunity of interceding on behalf of the Sandhanvalias, Atar Singh and Ajit Singh, who had formally sought the Maharaja's permission for returning to the Punjab.

In September 1842 a letter was received from Ajit Singh announcing "his intention to come to Lahore for presenting himself before the Shahzada (Sher Singh)." Sher Singh gave his approval for the return of the fugitives. Baba Bikram Singh of Una placed them under solemn oaths. On his standing surety for them, Sher singh pardoned them. Ajit Singh arrived in Lahore on 17 November 1842, followed by Atar Singh. Amnesty was also extended to Lahina Singh Sandhanvalia and Kehar Singh Sandhanvalia who were released from confinement in the Mukerian Fort.

Although Sher Singh had shown magnamity in allowing Atar Singh and Ajit Singh to return to the Punjab and to resume their accustomed positions at the court, they were not reconciled to him. Their original nominee for the throne of the Punjab, Mai Chand Kaur, whose cause they had persistently espoused even after crossing over to the British territory, was now dead (9 June 1842), yet they continued to nurture a feeling of hostility towards Sher Singh. This culminated in a murderous plot. On 15 September 1843, the Maharaja rode out of the city early in the morning, that being a sankrant the first day of the Bikrami month, there was no darbar for him to attend. He alighted near Tej Singh's garden where tents were put up for his son, Kanvar Partap Singh.

To fulfil the morning's engagement, he moved on the Shah Balaval where sitting in the baradari or pleasure house, he witnessed wrestling-bouts, with Diwan Dina Nath and Buddh Singh, his armour-bearer, in attendance. After he had dismissed the wrestlers with due charity, the Sandhanvalia Sardars, who had followed him with 150 horse and 300 foot, requested him to inspect their troops.

Totally without suspicion, Sher Singh agreed and came out of the room. After the parade, Ajit Singh sought his permission to show him a carbine he had obtained from an Englishman in Calcutta. As the Maharaja who was a great lover of weapons put forth his hands to take hold of the rifle, Ajit Singh pressed the triggers and emptied the loaded barrels into his chest. "Oh, Sardar, What deception?" was all the Maharaja could say as he dropped to the ground dead. Ajit Singh rushed forward and cut off his head with a single blow of the sword. The shots that killed Sher Singh were a signal for the elder Sandhanvalia, Lahina Singh, to pounce upon the 12-year old son of Maharaja Sher Singh, in the nearby Tej Singh garden, and hack off his head. Dhian Singh was also killed shortly after that. The Sandhanvalia sardars were hunted down and killed shortly after this.

Sher Singh was survived by his son Sahdev Singh, born to Rani Dukno in 1843, who, after the annexation of the Punjab in 1849, accompanied the deported king, Duleep Singh, to Fatehgarh in Uttar Pardesh. Descendants of Sahdev Singh, his son Basdev Singh and daughter Harbans Kaur (later married to the Rana of Dhaulpur), lived at Rae Bareli.