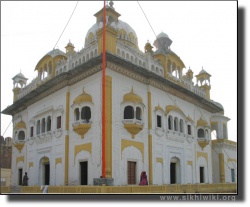 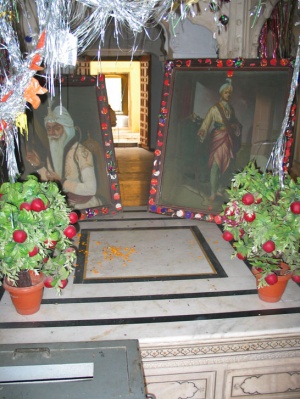 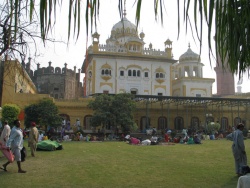 A domed building is adjacent to the southern corner of eastern wall of Badshahi Mosque outside Roshanai Gate. This building is the Samadh of Sher-e-Punjab Maharaja Ranjit Singh, One of the many great Sikh rulers of the Sikh Empire, from 1799-1839. He died of paralysis on 15th Har Samvat 1896 (27th June 1839) and was cremated at this spot on the next day i.e., on 16th Har Samvat 1896 where the beautiful samadh has been built. It is a very big double storey building. The samadh of Maharaja, Ranjit Singh at its centre is surrounded by the samadhs of his eleven queens who were burnt alive (sati) with the dead body of their husband. The Samadhs of two pigeons burnt while flying over the flames of cremation fire are also there.

This domed building was built on eight pillars, but after a few years these pillars cracked and the building was about to collapse. Then at the orders of the British Government, Kanhaya Lal Hindi (Executive Engineer, Buildings Lahore Division) put thick iron rings around the old pillars, eight additional pillars were also erected and now the whole building is standing on 16 pillars. The building is very beautiful. The wood panels of the ceiling are decorated with tinted glass work. The interior walls have skillfully executed floral designs that are extremely beautiful.

A fair is organised in the month of June and a large number of local and foreign sangats assemble. The main gate done in red stone has floral patterns engraved in them. The Samadh's control is in the hands of the Evacuee Trust Board these days.

Video of site at Google [1]