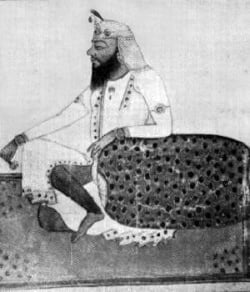 Maharaj Kharak Singh, possibly wearing the Koh-i-noor, as had his father and brothers each in his turn as Maharaj.

Maharaja Kharak Singh (9 February 1801 - 5 November 1840) was the eldest son of Maharaja Ranjit Singh. Raised in the Sikh martial tradition he was , even as a child barely six years old, given the 'nominal' command of the Sheikhupura expedition (1807); was placed in charge of the kanhaiya estates in 1811 at the age of 10; and deputed in 1812 to punish the recalcitrant chiefs of Bhimbar and Rajauri. He was given the command of the Multan expedition (1818) as well as of Kashmir (1819). He was also sent on a similar campaigns undertaken by Ranjit Singh for the conquest of Peshawar and against the Mazaris of Shikarpur.

In 1812 at age 11 his was married to Chand Kaur, daughter of Jaimal Singh Kanhaiya.

Frail in both mental and physical constitution, he was given to using wine and opium, he ascended the throne in June 1839 on the death of his father. His father's powerful Wazir (chief minister), Dhian singh Dogra was an and ambitious man who immediately resented the sudden ascendancy of Kharak Singh's friend, his former tutor, Chet Singh Bajwa, a trusted Sikh courtier. The Dogra brothers, Dhian and Gulab Singh Dogra were Rajputs, Hindus who had cast their fortunes in Maharaja Ranjit Singh's court. They had worked hard to earn their positions of power and influence and had no intentions of seeing that power slip away. Dhian singh's brother had been made Raja of Jammu and intended to see his son one day occupy Ranjit Sing's Golden Gaddi.

So the brothers, masters of deception, spread rumors against the Maharaja and Chet Singh. It was wispered that both the Maharaja and Chet Singh were secretly planning to sell out the Punjab to the British, pay them six annas in every rupee of state revenue and, worse of all, disband the Sikh army. To fan their fire the Dogras had letters forged with their interception being discreetly arranged. Gulab Singh Dogra, Dhian Singh's elder brother, was charged to work upon Kharak Singh's son, Kanvar Nau Nihal Singh, then travelling in his company from Peshawar to Lahore. Misled by these fictitious tales, the young prince became estranged from his father.

With a majority of the Sikh court now turned against the new Maharaja, a plot to assassinate Chet Singh Bajwa was sent in motion on Oct. 9, 1839. Early that morning the conspirators entered the Maharaja's residence in the Fort and assassinated Chet Singh in the presence of their royal master, who vainly implored them to spare the life of his friend.

Maharaja Kharak singh was removed from the Fort and held in a Haveli, a prisoner in the hands of Dhian Singh. Kanvar Nau Nihal Singh was seemingly put in charge, but the Dogra vazir was once again in control. The Dogra Brothers enjoyed a moment of popularity having, it seemed, just saved the Sikh kingdom from the British. Dhian Singh rationalized Kharak Singh confinement, explaining the measures were neccessary to prevent his escaping to the British territory, joining several powerful Sikh Sardars who had recently crossed the Sutlej, fearing for their own lives, and returning with British help to regain his rightful throne.

Doses of mercury and another poison were administered to the Maharaja concealed in his food. The already sickly Karak Singh quickly grew sicker. He died November 5, 1840 with his son, who had never returned to visit his father, returning 'one last time' to light his father's funeral pyre.

Nau Nihal Sing now the inheritor of his grandfather's kingdom, was never officialy installed as Maharaja. That day as he set fire to his father's pyre he had no way to know that in just a few days another relative would be lighting his own, (his own child was yet to be born). So Kanvar (intended Heir/Prince) — Nau Nihal (The New Branch) of the Singh (Lion) was one more of the 'Lion of the Punjab's' scions cleared out of the Dogra path in their march to rule the Punjab.

The story continues with:

1.The encyclopedia of Sikhism, Harbans Singh