From SikhiWiki
(Redirected from Machhivara forest)
Jump to navigationJump to search

Machhiwara (30.55°N 76.12°E) (Punjabi: ਮਾਛੀਵਾੜਾ) is now a small town in Ludhiana district in the Indian state of Punjab. It figures prominently in the last phase of Guru Gobind Singh's life. As the Guru arrived here after leaving Chamkaur on the night of 7 December 1705, he stopped first to rest in a garden outside the village. Here Bhai Mani Singh, Bhai Daya Singh and Bhai Dharam Singh, who had separated from him when he had left Chamkaur, rejoined him as per the Guru's plan. He later moved to the house of Gulaba, the masand, inside the village. From here the brothers Ghani Khan and Nabi Khan, two Ruhila Pathans, who as horse dealers had previously visited Guru Gobind Singh at Anandpur, assisted him to travel further west disguised as Muslim divines. There are three gurdwaras to commemorate these events. 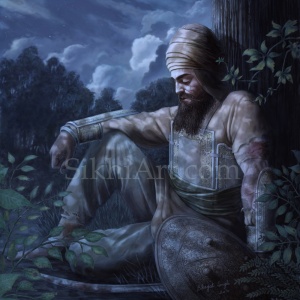 When Aurangzeb's army attacked the fortress of Chamkaur Sahib, Guru Gobind Singhji successfully resisted their onslaught and slipped away into the forests of Machhiwara. The Mughal forces got wind of his whereabouts and Guru Gobind Singh was saved by two of his Muslim devotees who disguised the Guru as their Muslim prophet.

Machhiwara is famous for Gurudwara Charan Kanwal Sahib named after the Guru's feet that are compared to the lotus flower. The place where the Guru rested is where the Gurudwara stands today.

Gurudwara Charan Kanwal Sahib marks the site of the garden where Guru Gobind Singh stopped first and where Bhai Mani Singh, Bhai Daya Singh and Bhai Dharam Singh found him asleep after an arduous journey through the thorny forest. The central building of this shrine has a square hall on the ground floor with a square sanctum in the centre where Guru Granth Sahib is seated.

The domed pavilion over the sanctum on the second floor contains a large portrait of Guru Gobind Singh in a sleeping posture. There are also decorative domed pavilions on this floor, square at the corners and rectangular at midpoints of the walls. A rectangular sarovar, west of the Gurdwara, was constructed during the 1970's. It receives its water supply from an old well believed to be the same as watered the garden at the beginning of the eighteenth century. The Gurdwara is controlled by the Shiromani Gurdwara Parbandhak Committee through a local committee which also manages Gurdwara Chubara Sahib inside the town.

A big fair is held in the third week of December every year to commemorate Guru Gobind Singh's stay in Machhivara.

Gurdwara Chubara Sahib is inside the town on the site where the house of Gulaba Masand once stood. The word chubara means a room on the first floor. It was in a first floor room in Gulaba's house that Guru Gobind Singh had put up. The present building comprises a square hall with the sanctum in the centre. The hall is in a square walled compound. For administration, the shrine is affiliated to Gurdwara Charan Kaval.

Gurdwara Uchch da pir is where Guru Gobind Singh had left Machhivara disguised as a Muslim pir, carried in a palanquin and declared by Ghani Khan and Nabi Khan to be the Pir of Uchch, an old seat of Muslim saints in south-west Punjab. Gurdwara Uchch da Pir was established after 1947 in the private house formerly belonging to the descendants of Ghani Khan and Nabi Khan. The Guru Granth Sahib is seated in a small rectangular room. A double-storey cell in this house is also being maintained in memory of Guru Gobind Singh. It is believed that he stayed here for a short while after shifting from Gulaba's house.

The town is located 35 km away from Ludhiana, 9Km from Samrala, 40 km from Chamkaur Sahib, 25 KM from Rahon. The river Satluj is towards its north and Sirhind Canal is towards its west.

Approach Roads : The town is approachable by roads from Samrala, Ludhiana, Ropar, Chamkaur Sahib, Nawan Shahr (Satluj bridge).The Satluj Bridge is under construction. On its completion the access to the inhabitants of Doaba & Malwa regions would become easy. Now people from both sides cross by boat. By road, it is about 50 Km farther.

Nagar Panchayat was formed in Nov,1977 in place of Gram Panchayat through a notification by Punjab Government. Presently,it is working under the presidentship of Sh.Anil Sood. The income of the Nagar Panchayat for the financial Year 2004–2005 is Rs. 2.06 crores. It spent on development an amount of Rs. 1.16 crores. The town is a Sub-tehsil. It has the offices of Naib – tehsildar, Nagar Panchayat. Block development of Panchayat officer, Child development Project officer, Post Office, Market Committee, Police Station, FCI, Punsup, Food & Civil Suplies, Punjab State Electricity Board, Telephone Exchange, Markfed etc. Water Supply About 80% of the population is served by the two tube wells.More shall be installed shortly to cover 100% population of the town.

The population of the area is served by a team of doctors and Para medical Staff of the civil hospital. Also a homeopathy dispensary exists in the civil hospital that attracts a large crowd of patients, besides the town has many private Clinics / nursing homes. Prominent among them are – Gill Nursing Home. A government veterinary hospital is also there to serve the ailing animals of the area.

There are three parks in the town. They are Indira Colony, Dashmesh Nagar, Bus Stand

The town caters to the business needs of inhabitants of a large no. of villages. It has a good whole sale/retail market, four petrol pumps & an LPG gas agency. The volume of business has attracted many banks namely State Bank of India, Oriental Bank of Commerce Bank of India, central Bank of India, The Land Mortgage Bank and the Ludhiana central co-operatine Bank. Also the grain market has approximately 250 commission agents. The town has more than 10 rice–shellars, a coldstorage of a ice factory. The town is surrounded by a number of factories owned by reputed business houses like oswals, shreyans etc.

Seven persons of the town battled for the freedom of the country from British rulers. They are : 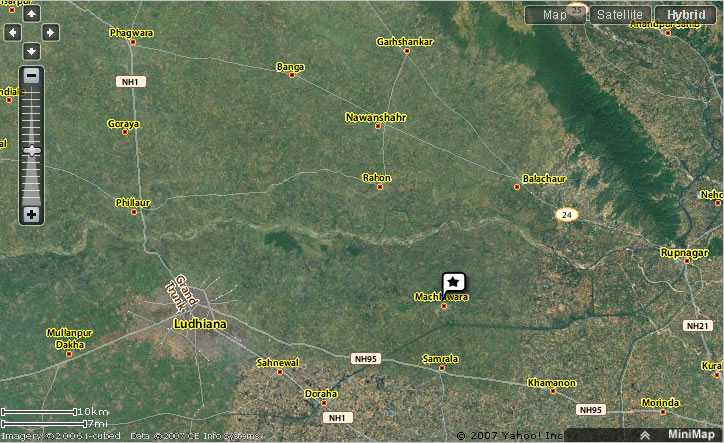