The Komagata Maru (also spelled Kamagata) was a Japanese steam liner, chartered in 1914 by Gurdit Singh, an affluent Sikh businessman, to carry 376 Indians, all Punjabis to Canada. The Ship embarked from Hong Kong, stopping in Shanghai, China; Yokohama, Japan; Vancouver, British Columbia before arriving in Canada. 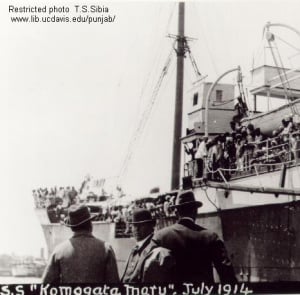 During the period before 1920's the whole of North America has a policy of discrimination against coloured races which was thinly disguised to appear as something else. The dominate white governments of USA and Canada were determined not to allow the flow of Asians, whether so called 'yellow', 'brown' or 'black' immigrants.

The 1900 census reported only 2050 people from India living in Canada and the USA.

The majority of these were Punjabis men who had settled in Canada in the hope of finding work to improve their economic situation, many had left wives and children at home and as many Asians continue to do today, hoped to send money home to their extended families in Punjab. On arrival in Canada they encountered discrimination and were not welcomed by the white Canadians people who saw their employers all to willing to exploit hard working men who were willing to work for less money, they wanted this 'invasion' to stop. British Columbian politicians were soon pressured into passing stringent laws discouraging the immigration of Indians to Canada.

Indians coming across the pacific ocean, were required to have at least $200 on their person to enter British Columbia, this at a time when the average Indian worker earned only about ten cents a day. Additionally they had to have come by non stop passage from India. Few ships, if any, could carry enough coal, or wood at the time to make this possible. The Canadian government was also pressuring steamship companies to stop selling tickets to Indians.

In 1907 a bill was passed denying all Indians the right to vote that also restricted other rights they had previously enjoyed. All this was done to stop what was referred to as the "brown Invasion."

So when the the Komagata Maru docked at Vancouver, the passengers were not allowed to land in Canada. Eventually, the ship was forced to return to India. The passengers consisting of 340 Sikhs, 24 Muslims, and 12 Hindus, who were all were British subjects had to suffer the hardship of many weeks sailing back. This was the most notorious "incident" in the history of Canada's attempt to limit British Citizens of Indian decent from entering Canada.

Gurdit Singh, from Sarhali, Amritsar, was a well-to-do businessman in Singapore who was aware of the problems that Punjabis were having in getting to Canada due to exclusion laws. He initially wanted to circumvent these laws by hiring a boat to sail from Calcutta to Vancouver. His aim was to help his compatriots whose journeys to Canada had been blocked.

In chartering the Komagata Maru, Gurdit Singh's goal was to challenge the continuous journey regulation and open the door for immigration from British India to Canada.

Hong Kong became the point of departure. The ship was scheduled to leave in March, but Singh was arrested for selling tickets for an illegal voyage. He was later released on bail and given permission by the Governor of Hong Kong to set sail, and the ship left Hong Kong on April 4 with 165 passengers. More passengers joined at Shanghai (April 8), and the ship arrived at Yokohama on April 14. It departed from Yokohama on May 3 with its complement of 376 passengers, and arrived in Burrard Inlet, near Vancouver, on May 23. "This ship belongs to the whole of India, this is a symbol of the honour of India and if this was detained, there would be mutiny in the armies" a passenger told a British officer. The Indian Nationalist revolutionaries Bhagwan Singh, Barkatullah and Balwant Singh joined the ship en route. Balwant Singh was head priest of the Gurdwara in Vancouver and had been one of three delegates sent to London and India to represent the case of Indians in Canada. Ghadarite literature was disseminated on board and political meetings took place on board.

When the Komagata Maru arrived in Canadian waters, it was not allowed to dock. The Conservative Premier of British Columbia, Richard McBride, gave a categorical statement that the passengers would not be allowed to disembark.

Meanwhile a "Shore Committee" had been formed with Hussain Rahim and Sohan Lal Pathak involved. Protest meetings were held in Canada and the USA. At one, held in Dominion Hall, Vancouver, it was resolved that if the passengers were not allowed off, Indo-Canadians should follow them back to India to start a rebellion (or Ghadar). The shore Committee raised $22,000 dollars as an instalment on chartering the ship. They also launched a test case legal battle in the name of Munshi Singh, one of the passengers. On July 7, the full bench of the Supreme Court gave a unanimous judgement that under new Orders-In-Council, it had no authority to interfere with the decisions of the Department of Immigration and Colonization. The Japanese Captain was relieved of duty by the angry passengers, but the Canadian government ordered the harbour tug, Sea Lion to push the ship out on its homeward journey. On July 19, the angry passengers mounted an attack. Next day the Vancouver newspaper The Sun reported: "Howling masses of Hindus showered policemen with lumps of coal and bricks... it was like standing underneath a coal chute".

The government also mobilised the HMCS Rainbow, a former Royal Navy ship standing idle in Esquimalt. Under the command of Commander Hose, with troops from the Irish Fusiliers, 72nd Highlanders, and the 6th DCOR regiments. In the end, only 24 passengers were admitted to Canada, since the ship had violated the exclusion laws, the passengers did not have the required funds, and they had not sailed directly from India, another requirement to make entry more difficult. The ship was turned around and forced to sail back to Asia, departing on July 23.

The Komagata Maru arrived in Calcutta, India on September 26. Upon entry into the harbour, the ship was forced to stop by a British gunboat, and the passengers were placed under guard. The ship was then diverted approximately 17 miles to Budge Budge, where the British intended to put them on a train bound for Punjab. The passengers wanted to stay in Calcutta, and marched on the city, but were forced to return to Budge Budge and reboard the ship. The passengers protested, some refusing to re-board, and the police opened fire, killing 20 and wounding nine others. This incident became known as the Budge Budge Riot.

Gurdit Singh managed to escape and lived in hiding till 1922. He was urged by Gandhi to give himself up as a true patriot. He was imprisoned for five years.

During the first two decades of the 20th century, Canada had recently passed several bills limiting the civil rights of Indians, including the right to vote, to hold public office, to serve on juries, or practice as pharmacists, lawyers, and accountants. However, because India, like Canada, was part of the British Empire, Canadian authorities did not pass exclusion laws explicitly targeting those of Indian origin. The Imperial authorities in London had noted Indian resentment when the White Australia policy was put in place in 1905; this policy was in turn adopted by New Zealand.

When Canada started making provisions to block immigration from India, it was warned by London to be cautious in its approach, and to be aware that its actions might inflame nationalist fervour in India. With this in mind, Canadian immigration authorities devised an ingenious plan to indirectly halt Indian immigration to the country. To be admitted to Canada, immigrants had to come by "continuous journey" from their country of birth and enter with at least $200 cash on their persons. The continuous journey regulation did not mention race or nationality and on the surface seemed fair and applicable to all immigrants. It was, however, an open secret that the regulation was to apply only to people from British India. Canadian Pacific did run a very lucrative shipping line between Vancouver and Calcutta. However, the Canadian government forced the company to stop this service. It was now impossible to come via continuous journey to Canada.

This was one of many hidden measures that Canada undertook to enforce a hidden "White Canada" policy. To put these measures in context, restrictions on Asian immigration were being enacted at a time when Canada was accepting massive numbers of European immigrants (over 400,000 in 1913 alone - a figure that remains unsurpassed to this day).