From SikhiWiki
(Redirected from Gurdit Singh)
Jump to navigationJump to search 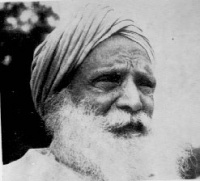 Gurdit Singh (1860-1954), was born in 1860 at Sarhali Kalan, district Amritsar of the Punjab. To Sardar Hukam Singh, a Dhillon Jatt. His grandfather, Sardar Rattan Singh Dhillon, was a high-ranking military officer in the Sikh Khalsa Army and had fought against the British during the first and second Anglo-Sikh Wars and he declined the British offer of a jagir after the British annexation of the Punjab Sikh Kingdom in 1849.

Later on, His father Hukam Singh went to Malaya where he settled down as a contractor. Left behind by his father in the Punjab Gurdit Singh received little education in his childhood, due to his being treated harshly by his teacher he left the school. However, at the age of 13 he managed to acquired enough private elementary education to allow him to correspond with his father in Malaya.

Gurdit Singh visited Malaya in about 1885 and like his father he too conducted business in Singapore and Malaya as a contractor, becoming very successful. He returned from there in 1909. In 1911 he raised his voice against forced labour. He wrote to the Government complaining against officials who forced poor villagers to work for them without remuneration, and when he received no response, he exhorted the people of his village to refuse to be subjected to begar (forced labour).

He chartered a Japanese ship, the Kamagata Maru in 1914 to go to Canada where the government had put restrictions on the entry of Indians. The ship, renamed Guru Nanak Jahaj by its predominately Sikh passengers, had a total of 372 passengers out of whom 351 were Punjabi Sikhs and 21 were Punjabi Muslims. The ship sailed from Hong Kong to Vancouver on April 3, 1914 as a direct challenge to the obstructions put up by Government of Canada meant to prevent Indian citizens who were sons of the British Empire from immigrating to Canada. The hardships faced by its passengers during their trip and their treatment after arriving in Vancouver, BC's port turned them into staunch nationalists. The ship reached Vancouver on May 22, 1914 where it was not allowed to dock. Attacked by the police once during the night, the attack was repulsed by the passengers. The spectacle raised major headlines across the newspapers across Canada and created a great stir among the predominantly 'so called white sellers of European decent' and the Indians who had previously established themselves in Canada.

An agreement was finally reached, the ship’s tanks were reloaded with fresh water, food, fuel for the boilers (coal apparently) and other supplies, paid for by the Canadian Government who had been warned to not let the affair get out of hand, less it cause trouble in India where a growing cry for freedom had the British fearing a revolution. Once the ship was loaded it was pushed out of the harbour by a Canadian warship, and started its long voyage back to China. With war breaking out during their return the ship was forced to head for India.

It reached Calcutta on September 29, 1914. However, the passengers were not allowed to enter Calcutta, they were allowed to land about 15 miles up the Hooghly and allowed to dock at Budge Budge where a train was waiting to take all the passengers to the punjab. They refused to board the train and in a 'mela' many of the passengers were shot dead with nearly forty evading capture including Gurdit Singh. who remained ‘underground’ for may years, until in 1920 on the advice of Mahatma Gandhi he made surrendered voluntarily at Nankana Sahib and was imprisoned by the British Government for five years. After his release he settled down at Calcutta where he died on 24 July, 1954.