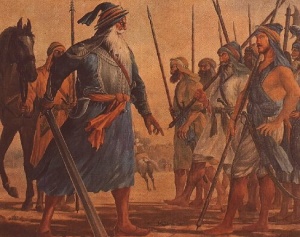 
Khalsa is God's army. Khalsa is sustained by the Will of the Almighty

Khalsa Akaal Purakh Ki Fauj is the Line of Saint-Soldiery, common among sikhs. These are words of Guru Gobind Singh. The purpose of the Khalsa as defined by the tenth Sikh Guru, Guru Gobind Singh who established the order of Sant Sipahi (Saintly warriors) was to act as "the army of God" to guard and protect everyone (not just Sikhs) and who always act according to their Gurus' teachings, rules and ethics were at act with charity, love and service to all human beings. The commandments of the Khalsa being enshrined in the Sri Guru Granth Sahib.

This brings unprecedented responsibilities and duties that need to be fulfilled by the Khalsa. If the Khalsa is truly Kaal Purakh's or Akal Purakh's fauj or "God's army" then the duties of the Khalsa is to serve the Almighty and the entire people of the world. This concept is all encompassing and cannot be used in a narrow sense to refer to the duties of the Khalsa to a small sect or elite group of men/women who share similar beliefs; the Khalsa must serve the wider world community as that is the goal set by the Gurus. If the Khalsa fails to serve this wider goal, it will be lacking in its duties to their Guru and will not fulfil the key requirement set out by the Sikh Gurus in Gurbani.

Guru Gobind Singh has very clearly set the mission for the Sikhs to tread this unique path. The Khalsa is to serve all the peoples of the World – only then can it be Akal Purakh ki Fauj. When the Khalsa starts serving the needs of a few, or starts being concerned only with itself, it will fail in its duties as set out by Guru Gobind Singh.

The above Shabad is by Guru Gobind Singh KHALSA... Read on..>>

Khalsa Kaal Purakh Ki Fauj is the Line of Saint-Soldiery present in Sarabloh Granth, written by Guru Gobind Singh. The text is present under title Bisanupad Dhanuaki Dev Plasi on line number 459. This has been misinterpreted/misprinted by ignorant people and the line Khalsa Akal Purakh di Fauj became more popular but in reality it's Kaal Purakh. Even Ragis, kirtanis used to Sing Akal Purakh without caring for the truth. Among common people 'Akal Purakh ki fauj' is more popular.

Kaal is destroyer and it's Hukam or Command of God(Akaal) and Khalsa = Sikh are strict followers of Hukam of God (in Japuji Hukam Rajai Chalna). The person who runs away from Hukam is not Khalsa and is not part of his army. This Army protects themselves and other from evil, works on command of lord.