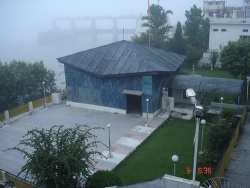 Kavi Darbar is the name given to an event or gathering where poets ("Kavi") assemble to engage in recitation of their poetry. Guru Gobind Singh, the tenth Sikh Guru is famous for his love of poetry. Every month on a full moon night, he used to arrange such a "gathering of poets" near the Gurdwara Paonta Sahib in Himachal Pradesh state, India. The place where he arranged these gathering is also called "Kavi Darbar". It is an open air location adjacent of the River Yamuna

Guru Gobind Singh established his fort at the selected place. He also set up a cantonment where his "fauj" stayed. With the support of Guru Gobind Singh, the ruler of Nahan was able to save his territory from being wrested by Raja Fateh Shah of Gharwal.

Guru Gobind Singh, launched his armed crusade from Paonta Sahib where he stayed more than four years from 1685 to 1689. He fought the first war against hill chiefs in the battlefield of Bhangani, at a short distance from Paonta Sahib. When he emerged victorious in the war word spread around that he was the most skilled warrior who could win battles with a small number of soldiers.

Situated at about 125 km from Chandigarh via Nahan, 105 km from Ambala via Jagadhri, 80 km from Mussoorie via Dehra Dun, 178 km from Shimla and 65 km from Saharanpur, Paonta Sahib has now emerged as a big tourist centre of Himachal Pradesh. Sikhs from all over the country and even abroad visit this place.

Guru Gobind Singh produced his best literature during his stay at Paonta Sahib. He wrote Bachittar Natak, Jaap Sahib, Sawayyas and Chandi-di-war. He sent his five disciples to Kashi to learn Sanskrit. He held a Kavi Sammelan every purnima in which poets of different languages participated. Even now on every full moon night Kavi sammelanis organised by the management of the gurdwara.

Without fail every morning before starting holy proceedings, obeisance is paid to Rishi Kalpi, Medni Parkash, Pir Budhu Shah and others associated with the place. Hola Mohalla, Baisakhi, birth anniversary of Sahibzada Ajit Singh, the eldest son of Guru Gobind Singh, who was born here and birth anniversary of Guru Nanak Dev are some of the major events that are marked by functions organised by the gurdwara management.

Vidya Sar, built in the complex, can be used by any writer, poet or scholar for carrying out research with regard to Sikhism. Free boarding and lodging is provided to scholars by the management of the gurdwara. A library and a museum has also been set up adjacent to Vidya Sar. There are a number of other shrines like gurdwara Tir Garhi Sahib, Gurdwara Bhangani Sahib and Gurdwara Shergarh Sahib (a man-eating tiger was killed by the Guru at this place) near Paonta Sahib.