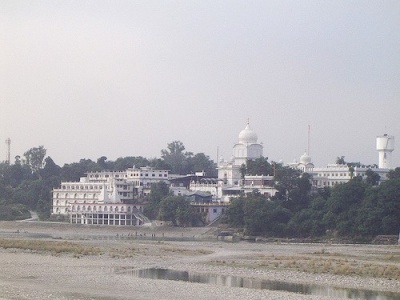 Gurdwara Paonta Sahib is situated in the city of the same name which grew up around Paonta Sahib. It is part of the district of Sirmour, in the state of Himachal Pradesh, India.

Gurdwara Paonta Sahib is situated at the place where 16 year old Guru Gobind Singh dismounted his horse to first touch foot in the Kingdom of Sirmour. The Guru had been invited by Raja Medini Prakash the ruler of Sirmour to visit his kingdom. The Raja, as many other stories relate, was very hopeful of establishing a strong relationship with the powerful Sikh Guru. As a special gesture of respect, the Raja, members of his court and his city's leading merchants had left the security of his palace in the Kingdom's capital - Nahan to greet his guest and his large party of Sikhs, the Sangat (congregation) and soldiers as well.

It was much safer in such dangerous times; the Raja of Srinagar, Garhwal Phatshah had recently taken over some villages (part of his Kingdom) and then there were the roving bands of Mughal soldiers to worry about, as well. It would have been easier to just stay in the safety of one's own Palace or fort waiting for guests to arrive, but the special greeting was meant to make sure that the Guru and his Sikhs felt especially welcomed. The warm welcome apparently had the desired effect for Guru Gobind Singh would spend the next four years at Poanta and leave a written account in which he described his time at Poanta Sahib as the happiest years of his life. The Guru wrote:

"I enjoyed myself on the banks of Yamuna and saw amusements of different kinds."

Poanta Sahib was built on the bank of the Yamuna River and began its life as a fortlike home built for the Guru and his family and ended up being a fortress with a Gurdwara in its interior. The fort was built in record time with the Raja's men aiding the Guru's Sikhs. Some have suggested that the builders were filled with extra energy as they wanted to finish the Guru's new home before his approaching birthday. At the time the forests that surrounded the site abounded in wildlife of every kind. Here the beloved Guru was able to escape the intrigue, envy and down right hostility of the Rajas of the Kingdoms around Chakk Nanaki, the city his father Guru Tegh Bahadur had founded (the same city that grew to become Anandpur Sahib)

Guru settles down at Paonta sahib 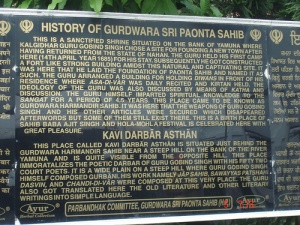 In these beautiful surroundings the Guru engaged himself not only in hunting and training his warrior Sikhs in the martial arts, but he also spent a great deal of his time in literary activities, composing many works of religious, as well as heroic poetry including Jap Sahib, Sawayyas Patshahi Dasvin the and Chandi-di-Var. He filled his Darbar (court) with as many as 52 of India's most talented poets and writers, many of them came from the ancient city of Benares. He put most of them to work translating the ancient classics of India's literature from the Sanskrit of the Priests and Khatris scholars into the then common languages of Braj or Punjabi, the vernacular languages of the people. The Guru also took many steps to beautify Paonta.

Before leaving the area, the Guru and his Sikh army defeated some of the neighboring Hill Chiefs who had, in his own words, 'attacked him for no cause'. This battle, known as the Battle of Bhangani was the Guru's first battle and the first of his victories. Later he assisted some of the same hill chiefs in the Battle of Nadaun in which his Sikhs helped route the Mughal force of Alif Khan who had been sent to collect funds 'owed' to the Mughal Emperor Aurangzeb. That historic battle was fought at the site where Gurdwara Sri Kavi Darbar, the very same site once used for the Guru's famed Kavi Darbars where the noise of the nearby Yamuna River had once caused the poets to complain to the Guru. It is said that in response to their complaints, with the blessing of Guru Gobind Singh the once roaring Yamuna fell silent as it passed the Gurdwara Sahib.

Before he left to return to the city now known as Anandpur Sahib, he appointed Bhai Bishan Singh to look after the fortress-like complex and the Gurdwara within it.

Secure in the shadows of the Himalayas Gurudwara Paonta Sahib stands dedicated to the memory of Guru Gobind Singh. Paonta (also spelled Paunta) means foot. Some credit the name to this being the site where the Guru first set foot on arriving in the area, others tell the story of the Guru losing an ornament worn on his foot or ankle (also called a Paunta) in the Yamuna's waters while taking his morning bath.

Getting to Paonta Sahib 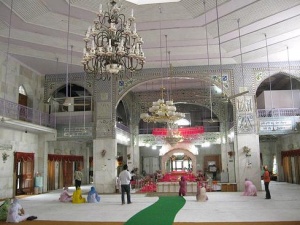 Paonta Sahib is connected by road with Yamunanagar (at 65 kilimetres), Nahan (at 42 kilometers), Ambala (120 km) and can also be reached from Dehradun (50 kilometers) away by crossing the river at Paonta ferry. It's About 120 km away from Ambala city. The magic of the lower Himalayas works on the mind of the pilgrims who come here to pay respects to the great Guru. Its outskirts are dotted with gardens, green meadows and tall evergreen trees, which echo the gushing sounds of the Yamuna's waters. 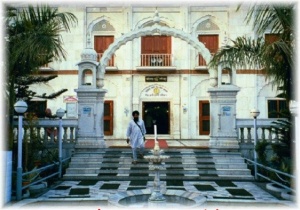 The building was reconstructed in 1823 by Baba Kapur Singh with funds provided by Sardar Sahib Singh Sandhanwalia. The shrine and about 120 acres of land attached to it continued to be controlled by hereditary mahants until a band of Nihangs occupied it forcibly in 1964. This was followed by a raid by the Himachal Pradesh police in which 11 Nihangs were killed.

After lengthy enquiries and court proceedings, the management of the Gurdwara was entrusted to an eleven-member committee with the president of the Shiromani Gurdwara Parbandhak Committee as its ex-officio chairman. Meanwhile, under a new piece of legislation, the Himachal Pradesh government permanently allotted most of the land formerly attached to Gurdwara Sri Paonta Sahib to some of its former tenants under the 'Big Landed Estates Abolition Act'.

Now spread out over three acres the Gurdwara complex includes; the Darbar Sahib (main sanctum); the Guru ka Langar, which serves free meals to some 2,000 to 5,000 visitors every day; the Talab Asthan, where pay was disbursed; the Kavi Darbar Asthan, where literary works were written, recited and discussed; the Dastar Astha, where robes of honour were given out and where Dastar tying contests were also held; a memorial to Rishi Kalpi, whom the Guru had brought from his hermitage to stay here and Gobind Ghat, the landing that leads into the river's waters.

The Hola-Mohla festival is celebrated here with great festivity.

All these places were reconstructed or renovated during the 1980s.