The word "Sikh" is derived from the Sanskrit 'shishya' meaning disciple. Sikhs are the disciples of their ten Gurus beginning with Guru Nanak (1469 - 1539) and ending with Guru Gobind Singh (1666 -1708) and their perpetual "living" Guru, the Guru Granth Sahib. There are over 23 million Sikhs in the world today, the vast majority live in the north Indian state of Punjab. Sikhism or Sikhi is the fifth largest organised religion in the world and the youngest.

History during the time of the Gurus 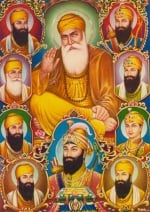 Ten Sikh Gurus: As a relatively young religion, with their history spanning from about 1400 to the present - just 600 years at most, much detail has been preserved. Sikhi was established by ten Gurus, teachers or masters, over the period from 1469 to 1708 - that is over a period of 239 years. These teachers were enlightened souls whose main purpose in life was the spiritual and moral well-being of the masses. By setting an exceptional example of how to live a holy and worthy life through the reciting of holy hymns called Shabads. The Gurus taught the people of India & beyond, to live spiritually fulfilling lives with dignity and honour.

Most of the places of birth of the ten masters are well documented and some fabulous sacred shrines (Gurdwaras) have been established at these places.

Guru Angad (1504 - 1552): The second Sikh Guru was born in 1504 at Harike in Ferozepur district in Punjab. Guru Angad invented and introduced the Gurmukhi (written form of Punjabi) script and made it known to all Sikhs.

Baba Banda Singh Bahadur (1670-1716) (Lachhman Dev alias Madho dass Bairagi) , originally from the Jammu region, is revered as one of greatest Sikh warriors as well as a most hallowed martyrs of the Khalsa Army. The Khalsa were engaged in a prolonged fight against the cruel Mughals, who were practising their tyranny and terrorism. His confrontation with the Mughal administration in Northern India, though brief, was strong and vigorous enough to shake the foundations of this evil empire. The agrarian uprising that he led in the Punjab was the underpinning on which the Dal Khalsa, the Sikh Misls and Maharaja Ranjit Singh built the edifice which finally culminated with Ranjit Singh capturing Lahore in 1799 and establishing the Sikh Kingdom of the Punjab. The resulted in the end of a dark period in the history of India. 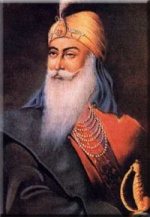 1799-1849: Sikh Empire and Maharaja Ranjit Singh (1780-1839) also called "Sher-e-Punjab" ("The Lion of Punjab") was a Sikh ruler of the sovereign country of Punjab and the Sikh Empire. His Samadhi (memorial) is located in Lahore, Pakistan. Maharaja was a born in 1780 in Gujranwala in modern day Pakistan, into the Sansi-Sandhawalia family. At the time, much of Punjab was ruled by the Sikhs, who had divided the territory among factions known as misls. Ranjit Singh's father Maha Singh was the commander of the Sukerchakia misl and controlled a territory in west Punjab based around his headquarters at Gujranwala. Ranjit Singh succeeded his father at the young age of 12.

After several campaigns, his rivals accepted him as their leader, and he united the Sikh factions into one state and he took the title of Maharaja on April 12 1801 (to coincide with Baisakhi day), with Lahore serving as his capital from 1799. In 1802 he took control of the holy city of Amritsar. He brought law and order, yet was reluctant to use the death penalty. He stopped India's non-secular style and practises. He treated both Hindus and Muslims equally. He banned the discriminatory "jizya" tax on Hindus and Sikhs which had been imposed by the previous administration.